Previous post
Project Veritas Gets A Win In Massachusetts

The Mule in Seat 1A, and His Turkey

Next post
From the VG Bookshelf: The State and Revolution (Part 2)

The Mule in Seat 1A, and His Turkey 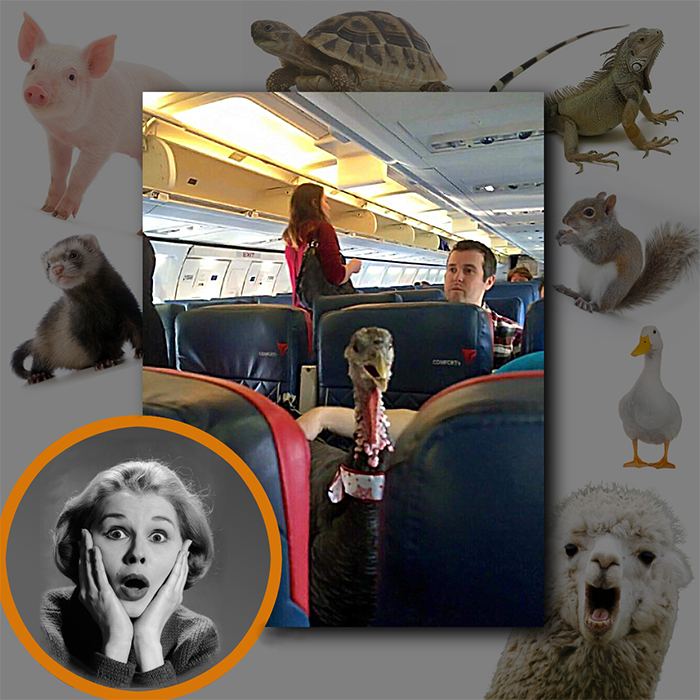 by Narcissi Craig in Headlines 22 Comments

For years unscrupulous people have abused the conflicting regulations for “Service Animals” in public spaces. The very real needs of people with service animals trained to perform a task are usurped by frivolous nellies who can’t function without their pocket pussy-cats. Nowhere is this more obvious than with the airlines. Today the airlines are forced to confront this dog pile of convoluted regulations, and craft policy to best serve everyone who pays for their services.

Let me start with a very (VERY) clear statement – I am 100% pro-service animal. I want insurance to cover them. I want them allowed in schools. Put them on planes, and in hospitals. Create a registry so they can pass without impediment or additional screening. For the people who have a legitimate service animal, it can make the difference between life or death. A dog trained to alert on a diabetic episode, or seizure is literally saving a life. A dog trained to guide a legally blind person makes daily life possible, in a society that often makes it impossible. A service animal is individually trained to perform a specific task for people with conditions that are beyond the repair of modern medicine.

If you need a pet turkey to fly, should you be on a plane?

Sadly, people with emotional issues have been given free license to “certify” their PETS as “Emotional Support Animals.” They graduated from a blankie to a turkey, expecting you to cow-tow to their entitlement. It doesn’t matter that you have paid full fare for your 8 hour flight. They need their pet, ahem ESA, to sit in the middle row seat. If you were smarter or more compassionate, you would understand that Mr. Smithers extra long down and loud gobbling keeps them calm. You…Animal!

Think the mouth breathing drooler in the middle seat is bad? Haha, hold my drumstick. Oh, never mind, you have two of them on your lap. You are begging to get moved to the last row near the bathrooms. Tightly wedged between the guy with questionable hygiene and the lady who lives to overshare personal information (and unwrapped candies from the bowels of her purse). Heck, those two are auctioning off that middle seat! It looks like they are set to book a pet free cruise around the world.

I just passed the test!

Meanwhile, there is a highly trained and licensed “professional” approving a therapy for a person who filled in a questionnaire. It’s so easy, you can do it right now. Look over at Skipper the sloth. Do you feel calm? Does his mere presence give you happiness? Calmness and relaxation? Now, give him a little scratch on the cute furry chin. Do you feel better and able to function as a productive individual now equipped to take on the Keurig machine? Boom, send in $100 and you now have a trained emotional support animal.

Congratulations! You are a Good Candidate for an Emotional Support Animal Letter. We have therapists standing by. Would you like to get your ESA Letter now?

Seriously, I took a 30 second quiz. There was no question as to the training or ability of my pet, ahem ESA. The type of animal was never a question. There was no consumer education involved in the responsibility or expectations of a service animal. If you question how easy it is to get your pet parrot certified (and a tiny red “service animal” vest!), take the test yourself.

For the record, my preferred pet, ahhh ESA is a Brazilian “Fila”  Mastiff. Please don’t make eye contact because they sense it as aggression. Oh, and they can be prone to excessive drool. 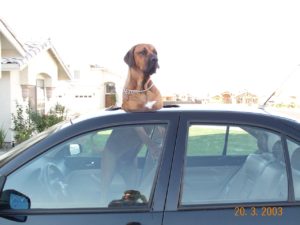 It’s a zoo out there!

Being a Libertarian, I view travel as a right. End. Stop. Everyone has the right to unrestricted travel. If a person finds their emotional stability is compromised by air travel, they should grab a train not a potbelly pig. When train travel isn’t an option, grab a Xanax. Pharmaceuticals are not an option? Start therapy, in person, with a specialist.

Do not get an internet consult and a sketchy prescription for an emotional support animal. It undermines the legitimacy of necessary and highly trained service animals. This abuse is entitlement at the expense of others.

The untrained ESA is often a risk to those around it, and disruptive. ESA’s are noted to defecate in planes during flights, bite other passengers, and impede travel for those with allergies. It means that if the ESA cat in 22D has you at asthma attack level 4, you get moved off the flight. That’s right, we can eradicate the small bags of tasty peanuts because someone may have an allergy. But if Mr. Bootsy has you gasping for air and a nebulizer, you get off the plane.

In a recent survey, 5,000 flight attendants highlight the problems of pets masquerading as trained service animals.

The Assn. of Flight Attendants, which represents nearly 50,000 members at 20 airlines, released the survey Thursday to highlight the problems caused by emotional support animals and to call for industrywide policies on such animals. The group believes many fliers are falsely claiming to need an emotional support animal to travel with a household pet free of charge.

A passel of puppies, and about as useful

Congress and Federal bureaucracy has an infinite capability to mess up even the most mundane issues. They took this ball of string and ran with it. Then tripped. What should be a very clear law has been made into a yarn ball of overlapping regulations. The ADA via the DOJ is very clear in what it says are the requirements for a Service Animal.

Under the ADA, a service animal is defined as a dog that has been individually trained to do work or perform tasks for an individual with a disability. The task(s) performed by the dog must be directly related to the person’s disability.

But the airlines are allowing pigs, turkeys, ponies, etc. It’s a mix of Noah’s Arc and an express train through rural India. The airlines don’t follow the ADA guidelines, but the Department of Transportation. Nothing in government is simple, and these two agencies can’t even agree on the definition of what constitutes a service animal. ADA defines it as a “dog”, while the DOT is less rigid.

Under the Air Carrier Access Act (ACAA) a service animal is any animal that is individually trained or able to provide assistance to a person with a disability; or any animal that assists persons with disabilities by providing emotional support.

Fighting over a bone

Yes, dear reader (whom is sneezing because that allergy to chicken feathers is really kicking in right now!), the government agencies cannot agree on what they define as a service animal. The DOT goes to the extreme of including emotional support animals under their regulations. In this case, I feel for the airlines, who through no fault of their own have this crazy morass of regulations to sort out.

Why do we need multiple agencies crafting conflicting regulations? Partially because Congress is full of baboons who lay about chattering over nothing. They can’t be bothered to actually craft a law to protect those people who require a service animal as defined by the ADA. Instead, they allow abuse of a policy enacted by the DOT. To add further confusion the Federal Housing Authority has enacted another policy.

Nothing in government is “simple.” Excluding those we elect, as they do seem “simple minded.”

The abuse and entitlement of ESA’s is not new. The 2014 video from “CBS This Morning” covers this very issue.

How do we support the needs of those who need a service animal and take away the opportunity for abuse? We tell congress to get off their lazy Trump focused back ends, and focus on crafting this legislation. They need to address the abuse, and remove protections afforded to the entitled nitwits. A registry is a great way to legitimize a service dog’s training. Recognizing legitimate programs like Canine Companions for Independence (CCI), or the VA recognized Assistance Dogs International (ADI).

I love animals, but not on my plane

If it slithers, swims, snarfles, or squawks I love it. We have a senior rescue mutt, a hedgehog, a turtle, and a million fur bunnies on the floor. In my lifetime, I’ve had more dogs than you want to know, and even had a few cats. Parrots, yes. Snakes, yup. Fish, oh my gosh the fish. My dream includes a couple alpaca, some tiny goats, and a horse. In a perfect world, there’s a dog boarding kennel in there too. What I don’t love is people who abuse a system set up to help the disabled. I don’t like the type of people who feel so entitled that they choose to make life more challenging to people already burdened by challenge.

A passenger who was attacked by an unrestrained ESA aboard a Delta flight has filed a lawsuit against Delta and the ESA’s owner. The lawsuit is requesting unspecified damages for the injury resulting in a trip to the Emergency Room and  28 facial stitches. The AJC reports,

The complaint filed in Fulton County state court in Georgia alleges that Delta “took no action to verify or document the behavioral training of the large animal.” It also alleges that the dog owner, Ronald K. Mundy Jr., a Marine, “knew or … should have known that his large animal was foreseeably dangerous.”