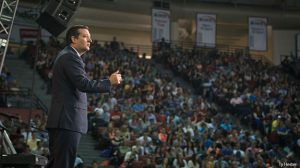 Ted Cruz kicked off his presidential campaign this morning with a speech at Liberty University. Without using a teleprompter, Cruz spoke eloquently about his parents, his childhood, and stories about his life and family. Intertwining those stories with political positions, the speech was a home run that had the audience of college students cheering and responding with thunderous applause.

Cruz announced his presidency early in the morning by tweeting this video, which seems to have energized the right, as so far, the stagnant GOP pool has been filled with candidates that have been slow to jump into the ring.

I'm running for President and I hope to earn your support! pic.twitter.com/0UTqaIoytP