The internet is all abuzz because of an interview in Playboy’s April 2015 edition. Noo, sorry. Its not the interview they had with Vice President Cheney. Instead I’m talking about Azealia Banks. WHO?! Yeah, that’s what I asked when I first started seeing her name. Well, it seems she’s a hip-hop rapper of some renown. 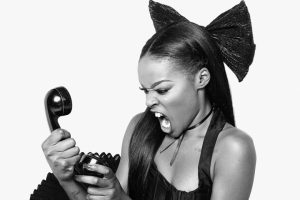 How well known you might ask? Eric Bolling at Fox News provides a bit of background for us:

As a young rapper growing up poor in Harlem… raised by a single mom, educated in the public schools Azealia had an American dream.
She hit it big in rap and Hip Hop recording.

You could say Azealia has become a young, talented and successful recording star.
Her music career opened doors to acting roles.
She has achieved that American Dream in multiples.
Azealia Banks was named one of Forbes “30 under 30.”
She earned over a million bucks in 2012, 2013 and much more in 2014.

That’s quite a success story! One would think that she’d be hugely appreciative of everyone who helped her get to where she is and thank them for it, right? Not. So. Fast.

As a matter of fact, she doesn’t like radio, if she’s posing nude we’re supposed to assume that she’s posing for kicks, reparations to slaves should happen because everyone else got diamonds and pearls handed to them, and as LA Times Gerrick D. Kennedy reports: (Warning – language alert):

She’s not the biggest fan of America — and her logic is both strange and a little offensive. “I hate everything about this country. Like, I hate fat white Americans. All the people who are crunched into the middle of America, the real fat and meat of America, are these racist conservative white people who live on their farms. Those little teenage girls who work at Kmart and have a racist grandma — that’s really America.”

She believes most of her Twitter attacks are related to her race. “Lorde can run her mouth and talk … about all these other bitches, but y’all aren’t saying she’s angry. If I have something to say, I get pushed into the corner.”

Boy howdy, she’s a peach ain’t she?!  Quite a few responded to her diatribe. Blogger Matt Walsh offered his own opinion last Wednesday. And that’s when the fight started. Here’s a sampling of what Matt wrote:

But if you really do hate this country and “everything about it” and almost everyone in it, then I would like to invite you to, by all means, leave and never return. I don’t usually take the “if you don’t like America, get out!” approach, but in your case, by your very words, it seems your distaste for our nation is so severe and absolute that there may be no other logical alternative. In fact, you would be a disgraceful, cowardly hypocrite if you felt this way and continued to live here, especially when you have the means to flee and take up residence in some other corner of the globe.
– – –
Do you know who is most responsible for the continued struggles of blacks in America? You, Ms. Banks. You and people like you. You are the problem. You are at fault. You pad your bottom line by promoting all of the worst attitudes and behaviors. If a black girl in the inner city takes your music to heart, she’ll stay poor, and she’ll stay in the inner city, and eventually she’ll be dead or in jail or collecting welfare while raising six kids by six different deadbeats.
Meanwhile, by stripping off your clothes and spouting these thug cliches, you are only acting to cement those cliches in the public conscience and denigrate your entire race in the process. It’s a shame, Ms. Banks. You could do so many wonderful things for America and for the black community if only you cared to. But you don’t. You’re too selfish. Too full of resentment. Too prejudiced and narcissistic.

Evidently Matt’s opinion was incredibly over the top. However, no one would’ve known how over the top it was until she made the choice to engage in an invective-filled Twitter war with Matt Walsh AND his wife. Zach Noble at The Blaze provides the lead-in to that story:

On Saturday, rapper/singer Azealia Banks tweeted a sexually explicit photo — a close-up of her genitals — and the message, “If you guys look closely enough you can see the future,” to popular blogger Matt Walsh and radio host Wayne DuPree.

Yes, ladies and gentlemen, you read that correctly. Azealia’s response to criticism was to take a photo of her own genitals and send it out over the internet to a blogger, his wife, and a radio host. Which means that far too many people saw something they’d REALLY rather unsee.  A mirror was held up that showed her who she really is. Her reaction to that was one of crudeness and sexually explicit vulgarity.

Full disclosure, I do not follow Hip Hop. I’ve researched it enough over the years to know that the lyrics, the attitudes embodied in the lyrics, and the actions of the singers do not follow the high standards I strive to set for my family. Quite frankly, Azealia Banks falls short of those standards.  She had a number of opportunities these last few days to take the high ground and engage in civil discourse to explain her comments in the Playboy article. Instead, she made the choice to respond with hate-filled rants and a photo of her genitalia.

Azealia, your naked response to criticism has shown us your true character and values. Not a bit of which embodies a role model that ANYONE should ever emulate.You see, the choices you make will ALWAYS reflect back on you and no one else. So, if you want to have a future filled with hate and continue to denigrate yourself by tweeting sexually explicit photos of your body; go right ahead.  The end result won’t be pretty and you’ll only have yourself to blame.