Previous post
Trump Continues to be Trashed; Rihanna is Praised for Her Racist Video 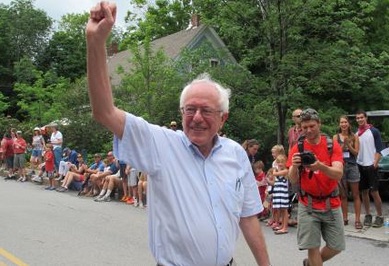 In case you missed Hillary practicing her coronation walk during a parade in New Hampshire over the Fourth of July weekend, here’s how she corralled the fawning media, like the sheep they are, lest they foul the majestic air surrounding Her Highness:

And if you think that any of them protested—at least on that day—the flagrant trampling of their First Amendment rights, you’d be wrong. Baaaaaah…

So is it any wonder that her stiffest competition, Bernie Sanders, who’s nothing more, really, than an ideologically honest version of the unscrupulous Hillary Clinton—yes, she’s just as Left as he is—is nipping at her kitten heels? He’s accessible…

@adamfeuerstein I was within 3 feet of the great Bernie Sanders at a parade in Waukee Iowa on Saturday. Unrelated, I also got a free hot dog

…he’s answering questions, and showing up at parades and town halls all around the early voting states, unencumbered by rope lines, attracting thousands of potential voters…

Pic 1: The crowd for Bernie Sanders in Madison last night.

Pic 2: The "crowd" for Hillary in Virginia last week. pic.twitter.com/3DifiMS1Oz

…and he’s spreading his dream of a Socialist Utopia to the breathless hordes of the Democrat Party (the irony of disseminating that message while our nation celebrated its Independence Day was apparently lost on both Sanders and the history-challenged masses).

Advisers to Mr. Sanders said voters flocked to his events because he offers ambitious proposals to major problems, such as his plans to eliminate tuition at public colleges, to reduce student debt and to spend $1 trillion on public works programs to create more jobs, though he proposed paying for them with huge tax increases. His advisers also argued that voters viewed him as willing to go further in championing significant tax increases for wealthy Americans to support programs to benefit low- and middle-income Americans…

“I’ve been struck by the large numbers of people who are saying they want to sign on the dotted line and support his campaign, organize their community, help in any way they can,” said Pete D’Alessandro, a veteran Iowa operative who is overseeing Mr. Sanders’ campaign there.

Mr. Sanders’ advisers dismissed any notion from Mrs. Clinton’s allies that she was anything but the clear front-runner in Iowa.

“That’s just political chatter and the usual tactics,” said Jeff Weaver, Mr. Sanders’ campaign manager. “What’s important is what we saw at Bernie’s recent event in Wisconsin — a candidate speaking to the issues facing Americans, and 10,000 people coming out for it.”

And, unlike Darling Do-Over, Bernie’s not lugging around a private server stuffed with official State Department emails like a rotting, stinking donkey carcass. And the Clinton Camp is reportedly concerned. 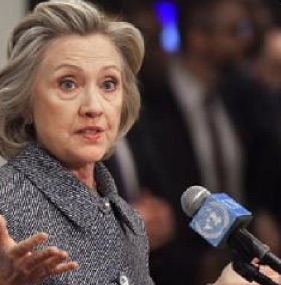 “Certainly she could lose Iowa,” said Joe Trippi, a veteran Democratic strategist who managed Howard Dean’s 2004 campaign. If that happened, Mr. Trippi said, “Mostly they’d just have to ride out the punditry and people with their hair on fire” and go on to capture the nomination.

“I think we underestimated that Sanders would quickly attract so many Democrats in Iowa who weren’t likely to support Hillary,” said one Clinton adviser, who like several others spoke on the condition of anonymity to candidly share views about the race. “It’s too early to change strategy because no one knows if Sanders will be able to hold on to these voters in the months ahead. We’re working hard to win them over, but yeah, it’s a real competition there.”

Asked on Friday about the crowds Mr. Sanders was drawing, Mrs. Clinton seemed to walk a careful line with her answer. “Well, we each run our own campaigns, and I always knew this was going to be competitive,” she told reporters at an ice cream stand in Lebanon, N.H.

Somehow, I’m not buying her hat-tip to the democratic process.

Meanwhile, in Liberal LaLaLand, Sanders has embraced a potential deal-breaker: His “extreme” position on guns. (Translation: To the Totalitarian Left, anything short of door-to-door firearms confiscation is “extreme.”)

Oopsie. Paging the Queen of Pander.

Only time will tell if Bernie will upset Hillary’s It’s-My-Turn apple cart. Stranger things have happened. Remember, she lost in Iowa in 2008 to that unknown, unqualified, un-vetted guy with the “funny name.” And the rest is history.

I wonder if the BernieBots are aware that, if elected, he’d giddily propose a top income tax rate of, wait for it, ninety percent. And that his ultimate goal would be to usher in Free Everything—uh, just hand over the majority of your salary-capped paycheck, please—following in the tradition of deadbeat Greece. Aw, forget those pesky details. We want our freebies! Go, Bernie!