Sean Lennon Has Sorta Rolled Away From the Tree

Next post
Failing Our Students: "B" is for Biology

Sean Lennon Has Sorta Rolled Away From the Tree 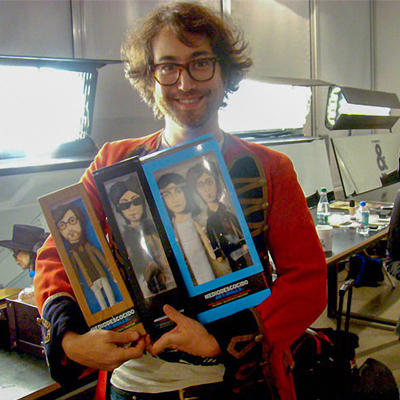 Don’t get me wrong: Sean Lennon, the 45-year-old son of John Lennon and Yoko Ono, is no conservative. But his social media comments show that he may be a wee bit more temperate than his parents. And as an American citizen (he was born in New York City), Lennon has thoughts about some stuff happening here in the USA.

To be sure, Sean Lennon has given support to some pretty liberal causes. For example, in 2011 he joined fellow rocker Rufus Wainwright in performing before New York’s Occupy Wall Street protestors. Ironically the boy who was born into rock ‘n roll royalty and wealth did a cover of Madonna’s “Material Girl” while performing for anti-capitalists. Go figure.

Lennon also wrote an editorial for the New York Times voicing his opposition to fracking, and also started an anti-fracking campaign which attracted other celebrities. Plus, in 2016 he described himself as a pacifist, and as a result, an anarchist. Whatever. Apparently some of his parents’ dottiness runs through his veins.

(“Stay in bed and grow your hair” is an alternative to violence? We’ve done that. It was called COVID quarantine, and it didn’t exactly quell violence, did it? But I digress.)

However, Sean Lennon surprises us with his common sense because he’s not exactly “woke.” In fact, he’s mocked it, most recently aiming at rioters in Portland, OR.

Over the weekend, Antifa vandals were busy once again, this time tearing down statues of Theodore Roosevelt and Abraham Lincoln on Sunday. Lennon couldn’t quite understand why they would do such a thing, especially the statue of Lincoln. So he tweeted this:

Can someone explain why it appears a Lincoln statue was toppled in Portland? Asking for a friend.

“Maybe Antifa tore down Abraham Lincoln’s statue for Columbus Day due to the speech Lincoln delivered at the White House to 14 Indian chiefs about how Indians should stop hunting and raiding and settle down to farming liked we pale-faced people do.”

He also wondered why the Pyramids of Giza were still standing because, you know, slavery!

The Pyramids of Giza were made under coercion from evil Pharaohs who were not very woke. I think we can all agree the Pyramids should be torn down immediately.

And, once again, a Twitter user tried to educate him.

“Dope take. The pharaohs are long gone, over 2000 years…but nazis, racists, and nationalist symbols from the last 200 years is a fair comparison.”

Once again, Sean Lennon fired back at the nonsense:

But this isn’t the first time that Sean Lennon has dipped his toe into the Waters of Anti-Woke. In April, he criticized the media for wringing their hands over referring to COVID-19 as the “Wuhan Virus,” saying it’s raaaacist. Lennon declared what we’ve known all along: that the mainstream media have lost their credibility.

Been listening to ‘respectable’ journalists quoting CCP official numbers for months without doubt or hesitation. Calling it the Wuhan Virus but only days later telling ppl who say it’s from China they’re racist. The official media have lost their legitimacy.

He also wondered why it was such a shocker when Bloomberg announced that China’s COVID numbers weren’t exactly legit.

Excuse me how the fudge is this breaking news? And why do we need U.S. ‘Intelligence’ to tell us what we all already know? https://t.co/3wu05HnMYO

Now one could point out that Sean Lennon’s mother is Yoko Ono, making him Japanese from her side. And Japan doesn’t trust China (which is something that American liberals should learn, but that’s another story). So maybe Yoko isn’t quite so politically correct, either. On top of that, Sean participated in a Tibetan Freedom Concert series in 2019, so perhaps some anti-China bias rubbed off from mother to son.

It’s still refreshing, however, to see that the son of John Lennon, the most whacked-out member of the Beatles, has rolled away from his father’s tree. Somewhat, anyway. After all, Sean Lennon is no conservative, and people on the right who get excited when a celebrity says something which tickles their ears should just settle down. Lennon won’t be showing up at Trump rallies or joining the GOP. But it’s still refreshing to see the son of a Beatle think outside the progressive box now and then, and to push back against his critics too. Good on him.