Sandra Fluke nominated for Time’s Person of the Year. Seriously.

Next post
John Boehner and the Naked Protesters (Photos)

Sandra Fluke nominated for Time’s Person of the Year. Seriously.

The continued irrelevance of Time Magazine and Sandra Fluke. Now here’s the perspective: just like indicting a ham sandwich, you can nominate one for Time’s Person of the Year too.

“The daughter of a conservative Christian pastor, Sandra Fluke, 31, became a women’s-rights activist in college and continued her advocacy as a law student at Georgetown. After she complained about being denied a chance to testify at a Republican-run House hearing on insurance coverage for birth control, Rush Limbaugh called Fluke a “slut.” Democrats and many Republicans reacted with outrage, and the left made Limbaugh’s slur Exhibit A in what they called a GOP “war on women.” Fluke, meanwhile, weathered the attention with poise and maturity and emerged as a political celebrity. Democrats gave her a national-convention speaking slot as part of their push to make reproductive rights a central issue in the 2012 presidential campaign — one that helped Barack Obama trounce Mitt Romney among single women on Election Day.”

You can vote for [or against] her here. 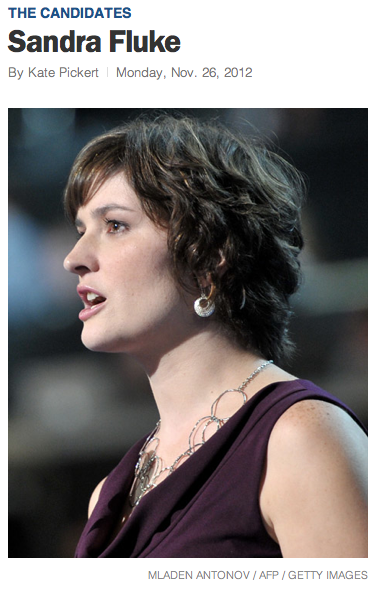