Next post
BREAKING NEWS of Russian military transports in Crimea

The report is out this morning from the AP that the Belbek International Airport in Sevastopol, Crimea, is being blocked in by the Russian navy.  The Russians maintain a naval base for the Black Sea Fleet in Sevastopol.  This information about the airport occupation is coming from Ukraine’s new Interior Minister, Arsen Avakov, via Facebook, says the AP.

“I can only describe this as a military invasion and occupation,” Avakov said.

Meanwhile, armed men in unmarked military uniforms are apparently also occupying the airport in Simferopol, where government buildings were seized yesterday and the Russian flag raised.

The word is also out that ousted Ukrainian president Viktor Yanukovych will be giving a press conference at some point today along the Ukrainian/Russian border.  Yanukovych fled to Russia (and has been spotted in Moscow), and there is a warrant out for his arrest, issued by the provisional government, for the shooting deaths of protesters in Kiev.

To give people an idea of what the geography looks like, here is a current map of the Ukraine: 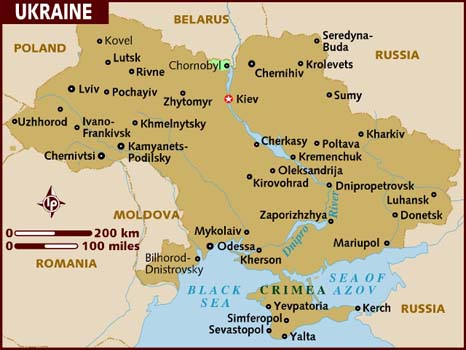 Crimea is in the south, and was considered in the era of the tsars to be a resort location for the elite and wealthy.  The Romanovs maintained a royal palace there in Yalta, and used it to escape the stifling summers of Moscow and St. Petersburg.  Livadia Palace was the location of the 1945 Yalta Conference between Stalin, Churchill, and Roosevelt.  There have also been wars fought in the Crimea in the past.  The area, with its Russian naval base, has stayed closer to Russia than the rest of the country.  From the AP article:

Ukraine’s population is divided in loyalties between Russia and the West. Crimea, which was seized by Russian forces in the 18th century under Catherine the Great, was once the crown jewel in Russian and then Soviet empires.

It only became part of Ukraine in 1954 when Soviet leader Nikita Khrushchev transferred jurisdiction from Russia, a move that was a mere formality until the 1991 Soviet collapse meant Crimea landed in an independent Ukraine.

The newly-formed Ukrainian government is vowing to keep the country together, and will not simply give up the Crimea to Russia.  Yanukovych fled to the Crimea in order to get to Russia, according to the reports.  If he chooses to go that far south to give his press conference today, near the Crimean Peninsula, it will be a very telling indicator of how he plans to proceed.  My theory is that if he tries to get as close to Kiev as possible, then Russia may back him in an attempt to regain power of the whole country.  If he goes further east and south, where the demographics indicate the population may be more favorable to Russia, then there may be an attempt by Yanukovych (with Russian backing) to split the country.

We here at Victory Girls will be sure to post updates as events unfold.