Previous post
Media Go All In On Gaslighting For Harris 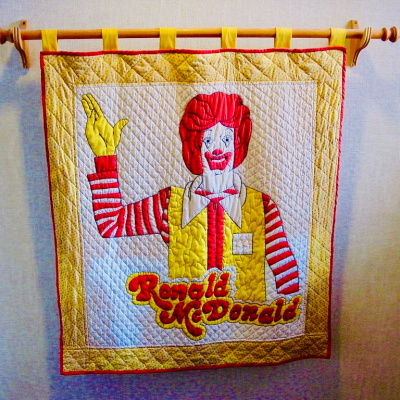 The looting, violence, and destruction that was inflicted upon Chicago’s Magnificent Mile was bad enough, but what they ALSO did that night was even worse. BLM looting thugs targeted a Ronald McDonald House.

Yes, you read that correctly.

This is disgusting, and should make EVERYONE angry. A Ronald McDonald House is a home away from home for families with children who are dealing with life-threatening diseases. For those callous cretinous thugs to go after a house where gravely ill children reside is beyond the pale.

Two-year-old Owen Buell and his family have been staying at the Ronald McDonald House near Lurie Children’s Hospital while he receives treatment for Stage 4 neuroblastoma:

They were supposed to go home to Joliet to celebrate his birthday.

“We were going to have cake and ice cream and do some presents at home with his siblings and his grandma,” said Owen’s mother, Valerie Mitchell.

But looting throughout downtown Chicago made it impossible.

“We got a phone call from the nurse saying that none of the nurses could make it in for safety concerns and they didn’t want any families in the middle of that trying to walk into Lurie’s,” Mitchell said.

The Ronald McDonald House was one of several locations hit early Monday morning.

“The whole door was shattered and it looked like a bullet hole, so I started freaking out thinking about how unsafe that was. You shouldn’t feel that way when your kid needs medical care. You shouldn’t be afraid to walk a few blocks down the street,” she said.

Can you imagine?? You are in Chicago to get your TWO year old treated for a major disease. Owen’s Stage 4 neuroblastoma is a rare cancer that attacks the organs, bones, stomach, and chest of young children. Stage 4 is bad news folks, and little Owen has one helluva battle to fight:

Stage 4: The cancer has spread to distant sites such as distant lymph nodes, bone, liver, skin, bone marrow, or other organs (but the child does not meet the criteria for stage 4S).

What he, his parents, and the medical staff do NOT need is cretinous looting thugs attacking the Ronald McDonald House, destroying windows and doors, and threatening their safety!

Have any thugs been arrested? Why yes, over 100 were, were some of those arrested any of the ones who attacked the House? Not that I can tell. Will those arrested stay in jail as they should and go to trial for the destruction they caused? If Kim Foxx had her druthers, they’d go scot free. I mean, my gosh, Kimmie isn’t in the arresting business guys.

Not a single one of the thugs who attacked the House that McDonald’s charities built can nor should they be described as “peaceful.” They are thugs who broke the law pure and simple.

There ARE people in Chicago who’ve had enough. Other looting thugs decided to run a protest and demand their pals who destroyed much of Chicago’s Magnificent Mile and attacked the House for children and their families be let out of jail with zero consequences.

Citizens of Chicago’s Englewood neighborhood were having NONE of it:

“If your issue is with the police, take it to 35th and Michigan [where CPD headquarters is located]. Don’t come in Englewood with it,” Darryl Smith, president of the Englewood Political Task Force, told reporters Tuesday. “If the people on 56th Street want to come over and protest the police, they can do it. But no one from the North Side or Indiana or any place other than Englewood can come here and do that.”

Smith, using a megaphone, also chided the protesters directly, saying: “Y’all don’t come out when a kid gets shot. Y’all come out when it’s got something to do with the f—— police.”

For some reason, the protestors didn’t want it documented that they were getting thrown out of the neighborhood by those who live there. Gee, I wonder why?

Mayor Lori Lightfoot doesn’t want people asking what she’s going to do to stop the violent destructive protests. She doesn’t want questions as to why she isn’t getting angry at the sheer number of people who’ve been killed in Chicago by thugs since the first of the year.

Wanna bet she also doesn’t want to be questioned about the Ronald McDonald House being attacked and vulnerable gravely ill children endangered because of those thugs?

The protests that have been taking place in Democrat run cities over the last 80 days are by no means peaceful. They are destructive, they are unconscionable, they are dangerous. And now, jackass thugs have decided that attacking a Ronald McDonald House is just fine.

It isn’t fine, and these protests need to stop before people get killed, or a child dies because thugs keep them from much needed medical care.