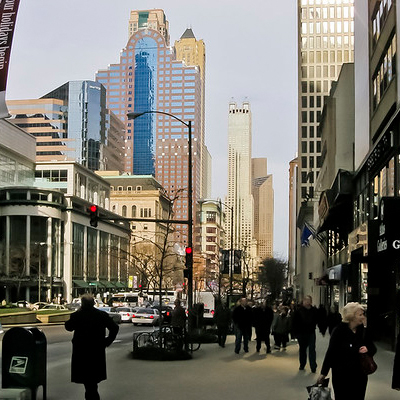 Chicago just keeps descending into a maelstrom, as looters ransacked large swaths of the city, hitting high-end stores. The chaos began around midnight (of course, because how many criminals get up for work on Monday?) and lasted throughout the wee hours. While the looting began in the north end of the city, it spread to the Near North side and south to the Loop, Chicago’s main business district.

Even if you don’t live in Chicago or its metro, you’ll recognize the names of these stores the looters cleaned out:

They also struck more plebeian places such as TJ Maxx, Walgreen’s, and a 7-Eleven. Gotta get those Slurpies — rioters, er, “large crowds” (as the media like to say) need hydration, right?

Looters even raided the flagship Macy’s store on State Street, which was formerly Marshall Field’s. It’s a National Historic Landmark, but if you’re out to steal some merch, you don’t care about stuff like history, tradition, or architecture. 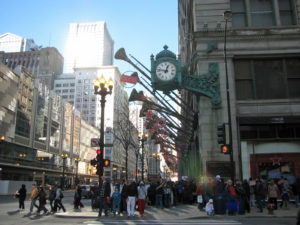 Here’s an example of a brilliant looter in action. This woman is panicky because she can’t find the tool to remove security tags from the clothing she’s stealing. She’s also putting her crime out on social media. What a genius.

So why did looters descend upon the city like Visigoths invading Rome?

There’s no official reason for the crime spree, but word is that it’s in retaliation for police shooting a 20-year-old man in Englewood, one of the highest crime neighborhoods of the city. The man, who was fleeing police, turned and shot at them. They shot back, but only wounded him in the shoulder. He’ll survive.

But trouble started when rumors began circulating on social media that the police had shot an unarmed teenager. That spun some of Chicago’s finest denizens into a cop-hating rage.

As a woman looter said,

“How much more of this did they think we was gonna take. This been coming.”

While she fumed, pillagers heaved a patio chair through the window of a Salvador Ferragamo store near her. As one does when one is angry.

As a result of the pillaging, the bridges over the Chicago River were raised in order to block looters. Some streets were closed, as were some expressway ramps. Chicago can be tough enough to enter during rush hour traffic; the closures really messed up traffic flow on Monday.

All bridges up in Chicago to prevent access to downtown. @cbschicago pic.twitter.com/KutdT8Nbc6

The final tally of the day’s temper tantrum: 100+ arrests, two people shot, and 13 cops injured. Plus some of the finest shopping in the nation trashed. Yeah, that’ll help a financially-strapped city that’s also dealing with COVID.

Brown also pointed out that Cook County State’s Attorney Kim Foxx had dropped charges against looters who caused havoc in May and June.

Lightfoot also seemed to throw some shade at Foxx:

Well, well, well — Kim Foxx. Ironically, on the same morning of the looting, the Chicago Tribune published an analysis of Foxx’s tendency to let felons loose. Indeed, during her first three years as State’s Attorney, she dropped about 30% of all charges. Her predecessor dropped about 19.5%.

Of course, as parents all know, if you don’t punish bad behavior, you’ll get more bad behavior. The same goes for criminals, too.

Last month, Lori Lightfoot pushed back when President Trump wanted to send federal troops to assist her in fighting criminals. She tweeted:

“Under no circumstances will I allow Donald Trump’s troops to come to Chicago and terrorize our residents.”

Sorry, mayor, but it’s the residents who are doing the terrorizing. Plus, while “common sense” gun control isn’t necessary in an ordered society, it’s useless in a city where order is collapsing.

If the President offers his help, I suggest you humbly take it. Your magnificent city is going to hell.