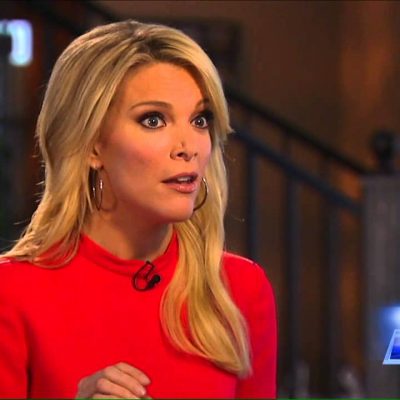 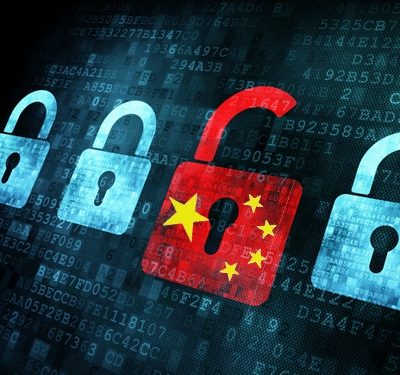 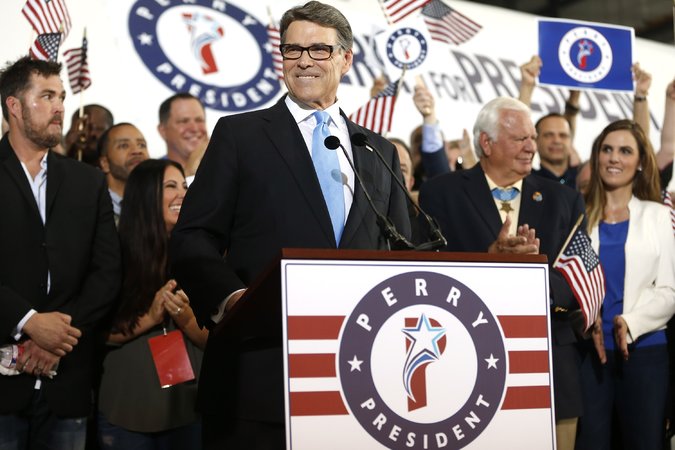 Today, at an Addison Texas airplane hanger standing in front of a C-130 prop plane, former Texas Governor Rick Perry entered the 2016 Presidential Race. In attendance were many veterans, supporters, his wife Anita and their family, Marcus Luttrell and his brother Morgan, Taya Kyle, and Medal of Honor Recipient Mike Thorton. 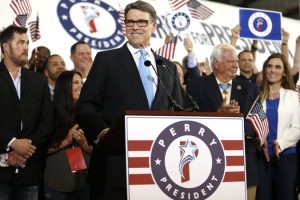 Just a few minutes ago he walked onto the stage accompanied by a Colt Ford song, “Answer to No One” that was changed to include Perry’s name.

Perry discussed the work ethic, community, and honesty that growing up on a cotton farm gave him. He touched on the problems of this country and his thoughts of what he plans to change; the foreign policy debacles, the onerous taxes we face, taming the national debt, approving the Keystone pipeline, rolling back many of the Obama executive regulations, border security, and national security. However, that can only happen with the right kind of reset button.

His comments included a mixture of hope, optimism, and policy:

“We need a president now perhaps more than ever who puts the American people first!” Anita Perry says. “Who puts every one of these veterans behind us first!”

And I think I might know a man who has all the right qualifications to make America great again!

“Yeah, it’s time for a reset,” he says. “Time to reset the relationship between government and citizen.”

We’re just a few good decisions away from unleashing growth and reviving the American dream.”

“Homeland Security begins with border security. The most basic compact between a president and the people is to keep a country safe,” Perry says.

Then he pivots to Iran. If elected, Perry says, his first act would be to “rescind any agreement with Iran that legitimizes their quest to get a nuclear weapon.”

This will be a show me, don’t tell me election.

While there are detractors who believe that Perry’s his 2012 candidacy will be a stumbling block, he does have quite the record of accomplishments as Governor:

Perry left office in January after a record 14 years as governor. Under him, the state generated more than a third of America’s new private-sector jobs since 2001.

While an oil and gas boom fueled much of that economic growth, Perry credits lower taxes, restrained regulation and limits on civil litigation damages. He also pushed offering economic incentives to lure top employers to Texas and repeatedly visited states with Democratic governors to poach jobs.

The reaction from the Democrats over the next week and throughout the long campaign season now that Perry has launched his campaign will be fun to watch. They will yell, scream, and gnash their teeth about his record. But here’s the thing, at least Rick Perry HAS a record. A certain pantsuit wearing, Scooby Van driving, disappearing emails, hidden private servers, foundation cash pay for favors, “go to back of the line,” Benghazi tantrum throwing candidate named Hillary Clinton …. doesn’t.