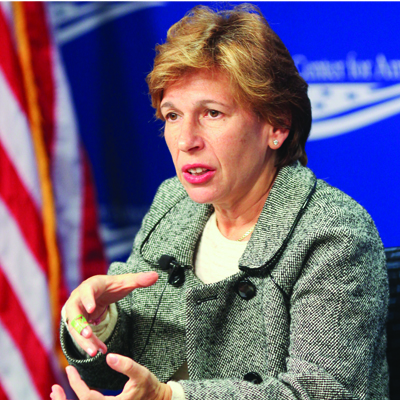 She must be the most tone-deaf woman in America. American Federation of Teachers head Randi Weingarten traveled to Ukraine to give aid and comfort to Ukrainian teachers’ unions. Never mind that school kids in the US suffered educational losses through the Covid lockdowns she endorsed. No, the unions called, and Randi must go!

Not Exactly a Humanitarian Trip

According to an announcement from the AFT, which is sponsoring the trip, the Trade Union of Education and Science Workers invited Weingarten “bear witness and call attention” to the plight of children and teachers in Ukraine. And they’ll distribute books, too.

Forget the fact that several months ago Randi Weingarten didn’t even display the flag of Ukraine correctly.

Randi Weingarten, who didn't even know which way was up on a Ukrainian flag several months ago, is in Ukraine reporting back on the intensifying conflict with Russia.https://t.co/IwreaA5kwC

But this isn’t the first trip Weingarten has taken to that region. She visited the Polish-Ukrainian border in April to “offer solidarity and support and highlight the desperate situation faced by child refugees fleeing the conflict zone,” according to the AFT. And guess who invited her to that little powwow? You guessed it: the Polish teachers’ union, the ZNP.

On top of that, Randi Weingarten will be speaking to “educators” (seriously, they’re teachers) in Warsaw on Friday for Polish Teachers Day. It’s a rally, the AFT reported.

Socialists of a feather all flock together, don’t they? Let’s be honest here — this is not a humanitarian trip. Weingarten is doing this to bolster the unions. The distribution of books to school children is a smokescreen.

While Weingarten touted her stunning-and-brave™ tour of Ukraine, not everyone applauded her. In fact, many voices on social media pointed out the disconnect: that US school kids are floundering due to her pandemic lockdown proscriptions while she’s out to save Ukrainian children.

“Why is the president of the American Federation of Teachers in Ukraine while our kids’ schools are failing?”

“Why is the leader of a teacher’s union trying to assess the situation? And what the hell is she doing in Ukraine?” Lmao this is what teachers are paying union dues for? Randi to have a vacation in a war zone?”

Finally, Caroline Downey of National Review got directly to the heart of the matter: that Randi Weingarten cares more about union politics than she does school children:

“America’s students need you on the front lines of K-12. Here’s a crisis you should feel compelled to address: math and literacy proficiency plummeted this year due to school closures you supported. You desert children when you put union politics and other issues above education.”

Remember those bad old days? You can thank Randi Weingarten for much of that. 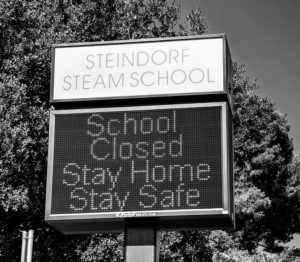 Because if she did, American school kids wouldn’t have experienced the devastating losses to their education that she and her fellow union travelers inflicted upon them during the Covid pandemic.

Due to union insistence upon keeping schools closed, scores on national reading and math tests have plunged. For example, 9-year-olds have scored, on average, seven points lower on math tests than just prior to the pandemic — the sharpest drop ever. They also scored five points lower in English, which is the most precipitous drop in 30 years.

And which kids suffered the most? Black kids in urban areas — where schools underperform during the best of times — saw losses of 13 points on average. Remember, too, that it’s in the urban areas where powerful unions kept schools closed the longest.

Never mind that Sweden kept its schools open during the pandemic and suffered little educational loss. And that doctors and other educational researchers said that school closures were wrong — that schools were a safe place for kids. Teachers unions, led by the execrable Randi Weingarten, insisted on shutdowns for as long as possible, and deemed “hybrid” instruction or Zoom lessons to be acceptable.

Weingarten doesn’t care about kids, whether American or Ukrainian. It’s all about the power of the unions and their agenda.

Randi Weingarten is rather like Madonna — the singer, not the Mother of God. Both of these horrible women have contributed to the ruin of millions of children’s lives. And both are still fighting to keep themselves in the spotlight.

But now their shelf lives are over. And as Weingarten attempts to keep herself relevant by tripping off to Ukraine, parents across America see this union shill as the shameless fraud she is.