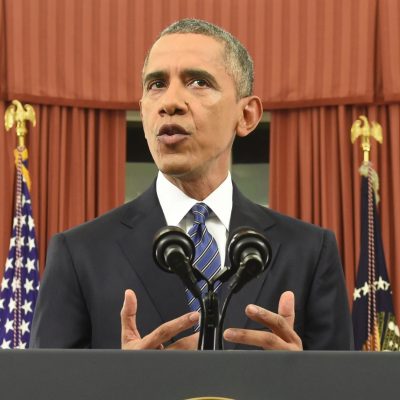 President Obama gave a speech last night, which was supposed to be the authoritative word from the Oval Office on what he is going to do about terrorism. It was pretty lackluster, to put it mildly.


Jim Geraghty from National Review put it this way:

At this point in his presidency, Obama speaks with only one tone, the slightly exasperated and sometimes not-merely-slightly exasperated “adult in the room” who constantly has to correct his fellow Americans, who are always flying off the handle, calling for options that “aren’t who we are”, betraying our values, and so on. He’s always so disappointed in us.

For once, I actually agree with Donald Trump.

Is that all there is? We need a new President – FAST!

One of the president’s oft-stated goals – and one that gets repeated by other Democrats – is that people who are on the no-fly list or the terrorist watch list should not be able to purchase guns.

Here's what Congress can do right now to defeat ISIL here at home → https://t.co/oDIQ2V3W6i pic.twitter.com/SRHaLhj8i4

There are a few small, itsy-bitsy, teeny-tiny problems with that idea. (Let’s leave aside, for the moment, that we have no standard definition of a “powerful assault weapon.”)

The no-fly list and the terrorist watch list are two different lists. The terrorist watch list is supposedly comprised of people who are “known or suspected terrorists trying to obtain visas, enter the country, board aircraft, or engage in other activity.” That list is definitely not perfect, and doesn’t even seem to have much of an impact in important areas, as 72 employees of the Department of Homeland Security were found to be on that list. Still, one point about that list has to be remembered:

"What could possibly be the argument for allowing a terrorist suspect to buy a semi-automatic weapon?" —@POTUS pic.twitter.com/sfmJiitjZd

https://twitter.com/pmarca/status/673674883704840193
No one on the terrorist watch list has been indicted, charged, or convicted of a crime. They are simply being watched. Maybe not well, if they can get a job at DHS, but the burden is on the government to build a case against them. We still have due process in this country.

The no-fly list is much broader. Simply put, the no-fly list is a list of people who have suspect ties to terror, have traveled to certain countries, have made the government mad, or just have a name that sounds like the name of one of the people that the feds would like to not have flying. Oh, and don’t forget just plain human error. The list is so broad, that despite TSA’s protests, children do get caught up on this list. And most famously, the late Senator Ted Kennedy was also on the no-fly list for a brief period of time. Of course, he could get off the list rather quickly. Others have been trying to get their names off for years. Marco Rubio made this point yesterday:

Sen. Marco Rubio (R-Fla.) says a majority of the people on the federal “no-fly list” do not belong there and therefore should not have their right to purchase firearms taken away.

“These are everyday Americans that have nothing to do with terrorism, they wind up on the no-fly list, there’s no due process or any way to get your name removed from it in a timely fashion, and now they’re having their Second Amendment rights being impeded upon,” Rubio said on CNN’s “State of the Union” on Sunday.

And you know who agrees with Marco Rubio? The ACLU, which has long fought against the no-fly list.

Let’s also remember that neither of the San Bernardino shooters were on the terror watch list OR the no-fly list. Neither of them had a criminal record.

So, how, exactly, did the no-fly list become the infallible standard, again?

Either the no-fly list is perfect and we can ditch TSA, or TSA is impenetrable and we can nix the horribly flawed no-fly list. Pick one.

And about that pesky “due process” thing…

There is exactly one SCOTUS precedent to support Obama's no-fly list due process ban, and it is Korematsu, which upheld Japanese internment.

There was speculation that Obama would announce some kind of executive action on gun control during his speech. The fact that he didn’t means that he either knows how constitutionally weak such an order would be (and would immediately be challenged in court), or he is just biding his time, waiting to find an angle to help him push his agenda. I’m betting on the latter. After all…

He might not get very far with the no-fly list, but it sure won’t stop him and other Democrats from trying.