Obama Sets Forth His Immigration Edict; Havoc to Ensue 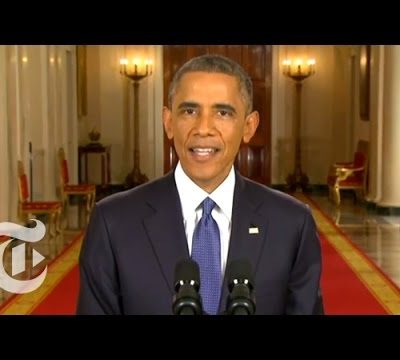 Obama Sets Forth His Immigration Edict; Havoc to Ensue

Cue the ominous John Williams music. Emperor Obamatine has spoken, and he has aimed his Death Star on conservatism, Republicans, what remains of the shredded Constitution, and the nation, by demanding very unconstitutional immigration reform.

On Thursday night, Obama made a maudlin pitch to the American public for amnesty for roughly 5 million illegal immigrants — the people that Democrats wring their collective hands over as being forced to “live in the shadows,” even though they’re readily visible every weekend at Home Depot:

We were strangers once, too. And whether our forebears were strangers who crossed the Atlantic, or the Pacific, or the Rio Grande, we are here only because this country welcomed them in, and taught them that to be an American is about something more than what we look like, or what our last names are, or how we worship. What makes us Americans is our shared commitment to an ideal -– that all of us are created equal, and all of us have the chance to make of our lives what we will.

That’s the country our parents and grandparents and generations before them built for us. That’s the tradition we must uphold. That’s the legacy we must leave for those who are yet to come.

Yeah, I get it. My grandparents crossed the Atlantic from Germany a little over a hundred years ago. But they arrived here legally, and at Ellis Island had to undergo some pretty humiliating assessments, as I documented in a post here.

ICE — short for U.S. Immigration and Customs Enforcement, which doesn’t really enforce much immigration at all — is building a 2400-bed family detention center in Texas in preparation for more illegal aliens arriving in the spring. ICE is expecting over 100,000 illegals to flood the US-Mexican border next year.

And what will those 5 million do for work as they exit those “shadows?” Obama’s economy has only added 6 million new jobs to the US economy since 2009, and he’s already promised or provided 1 million to foreigners. But hey, at least they’ll be paying taxes and not freeloading, right? Think again. Most illegals have very low income, which means they pay little in taxes, but can reap Annual Earned Income Tax Credit payments.  Furthermore, those payments could rise each year.

Who will be paying for this? If you tentatively pointed to yourself, you are a winner! Or, in this case, maybe not.

Oh, and remember the Ebola issue? It turns out that people here from the Ebola-stricken nations of Liberia, Guinea, and Sierra Leone can be given temporary protective status and work permits for 18 months.

And what about all those immigrants who have arrived here, filled out the massive paperwork, and paid enormous amounts of money to become legal residents of the US? Some of them have taken to Twitter, and are they pissed. One disgruntled American prepared and posted an invoice of the money he spent bringing his wife here through legal channels:

What this poor man, and others like him, don’t understand is that this is not about ‘fairness’ and ‘compassion.’ It’s about the votes. It’s about control. It’s about wiping out the upper and middle-classes and installing a permanent underclass to keep the Democrats in power for perpetuity.

As the brilliant Daniel Greenfield wrote:

Immigration requires opportunity. We still have it, but less of it than we used to. Our immigration system is not based on opportunity. It’s based on a migratory flow of Democratic Party voters.

Buckle your seat belts, folks. It’s going to be a very bumpy end to a Presidency.