Previous post
#UCCShooting: What We Should All Understand About The Oregon Shooter 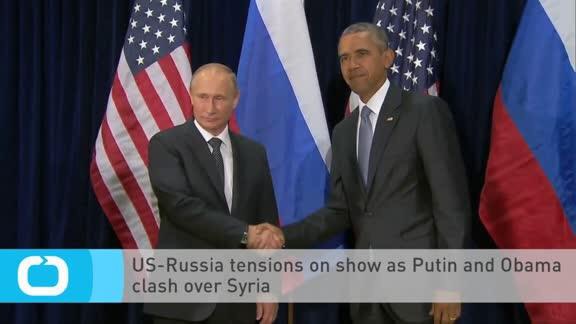 Well, he ought to know. President Obama’s disdain for Vladimir Putin’s undiscriminating air strikes was showing on Friday when he said Russia wasn’t distinguishing between good guys and bad guys – the good guys being Sunni resistance against the Syrian government and the bad guys being ISIL. Russia denies targeting anyone but Da’esh (ISIS/ISIL) but also publicly supports Syria’s current president, Bashar al-Assad. Obama says Russia will be “stuck in a quagmire.” Once again, Obama knows what he’s talking about.

“There is always a risk of getting bogged down but in Moscow they’re talking about three to four months of operations,” Alexei Pushkov, the head of the foreign affairs committee of Russia’s lower house of parliament, told France’s Europe 1 radio.

Pushkov said more than 2,500 air strikes by the US-led coalition in Syria had failed to inflict significant damage on IS jihadists, but Russia’s campaign would be more intensive.

“I think it’s the intensity that is important. The US-led coalition has pretended to bomb Daesh (another name for Islamic State) for a year, without results.

“If you do it in a more efficient way, I think you’ll see results,” he said.

Sergei Lavrov, Russia’s Foreign Minister, also asserted that Russia was only targeting the terror groups as the US-led coalition, including IS and Al-Qaeda’s Syrian affiliate the Al-Nusra Front.

These Russians sure talk tough. It’s too bad the US doesn’t have a leader that can project even a little bit of that righteousness on behalf of America.

Assad is also supported by Iran. Aside from Iran and Russia, US led coalition forces, that include France and Germany, seek a diplomatic solution where Assad would be removed from power. With the state of Syria fighting two different wars – one against rebels, and one against ISIL, the situation is very complicated. The rebels want Assad to step down and ISIL seeks an Islamic state in its forward push for more territory that includes large swaths of Syria and Iraq. Dispite a mutual benefit to these two groups if Assad were to be defeated, these two groups are not allies. The US purports to support the rebels and has done so over the past four years with money, arms, training (though pathetically inadequate) and air strikes.

For these past several years the world has looked to the US to lead the way in the Middle East, particularly with regard to the civil war in Syria. Obama has participated on the fringes, and has not influenced or contributed much to any success. With the current leadership vacuum, it is not surprising that Russia has stepped in to move the Syrian conflict toward an end favorable to Assad. It is only surprising that Putin hasn’t done this sooner (but, to be fair, he has been busy in the Ukraine and annexing Crimea). As for his motivations now, he is likely seeking to capitalize on Obama’s last few months in office so that he can establish a very strong presence in the area before America has a chance to regain its footing in foreign policy.

Obama has done a lot of damage to America’s reputation and sense of power in the world. Unfortunately, a new president will inherit a much less stable world than was left to Obama. Obama didn’t care about maintaining peace, in contravention of his inappropriately awarded Nobel Peace Prize. Instead he was, and is, more interested in moving to a place where America has no more power than any other nation or is even subservient. He has done a good job at achieving this position. America will need a strong foreign policy in order to regain her standing in the world, and to push back the chaos that has been created under President Obama. He is clearly not a believer in a power higher than himself – if he was he would have respected the Bible tenet that “to whom much is given, much shall be required.” Luke 12:48. As President of the United States, he was given the world. He has reduced it to bits.

So when Obama says Russia’s action in Syria is a recipe for disaster, he’s right, but that doesn’t mean he doesn’t approve. On the contrary, that action plays right into his legacy of reducing America to nothing special, just another, weaker player in the game. All is going according to plan.