Previous post
Never Lie To A Father Holding A Gun

New Report: No Reason To Continue Ban Of Transgenders In Military. Will Obama Get Out His Pen?

Next post
Disney's "Frozen" as gay propaganda? I say "Let it Go"!

New Report: No Reason To Continue Ban Of Transgenders In Military. Will Obama Get Out His Pen?

by Ruthie Thompson in Headlines 2 Comments

On Wednesday, Victory Girl’s very own Dejah Thoris wrote about a 34 year old woman who in Dejah’s words, “used to have an outtie, but now has an innie.” It appears that this woman is pursuing a lawsuit regarding the “discrimination” imposed by Cross Fit for not allowing her to compete.. as a woman. I know, I know, it all sounds so confusing.  Apparently, Cross Fit doesn’t think it fair that this woman, that used to be a man, compete with other women in this competition. To make a long story short, Cross Fit alleges that for the sake of fairness, competitors must sign up for the competition using the gender that they were born with. They must use the gender listed on their Birth Certificate. Well this woman has now gotten her new-found panties in a bit of a twist because she feels that she is being discriminated against, even though she has an obvious biological advantage over the other women who have remained a woman since birth. If you didn’t get the chance to read the story, you can find it here.

Today, a new report was issued by an independent commission made up of none other than Dr. Joycelyn Elders and Rear Adm. Alan Steinman. Steinman is a former chief health and safety director for the Coast Guard. And Elder? Dr. Joycelyn Elder served as surgeon general for Bill Clinton in his first term as President. A Clinton staffer could come in quite handy for a Hillary run in 2016 especially when she will need a diversion for her bloody hands from Benghazi. Regardless, this new information could also fit in nicely for the President with the pen. Yes, Obama can lift the decades-old ban with just a lift of his pen. There would be no need for him to seek approval from Congress and my guess would be that he wouldn’t anyway. Right now, transgenders are not allowed to serve in the Military. It is unknown as to how many transgenders are currently serving as I have read conflicting reports. One thing remains clear, if they are serving, they are hiding it. If caught, they are relieved of their duty and are not allowed to serve.

The current ban prohibits anyone that is transgender from joining or remaining in the military based on a report in the 1980’s that concluded that gender identity is a mental disorder. Also, there were issues regarding the treatment that someone in the military would have to undergo in order to fulfill their new gender identities.  Those treatments were thought to be a distraction as well as being time consuming. However, with this new information, coincidentally sought out by a former Clinton staffer, engaging in body part reassignment procedures, other plastic surgery procedures, hair transplants, hormone treatments and other procedures associated with the transition, is apparently something she feels that our military should take on. (Gasp!)

“We determined not only that there is no compelling medical reason for the ban, also that the ban itself is an expensive, damaging and unfair barrier to healthcare access for the approximately 15,450 transgender personnel who serve currently in the active, Guard and reserve components,” said Elder.

Currently, 12 countries now allow transgenders to openly serve in their armed forces. Britain has allowed them to serve since 1999 and more recently, Australia joined in allowing them to openly serve in the year 2010. Coincidentally, Obama repealed “Don’t Ask Don’t Tell” in 2011 and more recently lifted a ban that allowed for women to serve on the front lines in combat. Were these possibly preludes for what is coming next? I’m inclined to believe it is.I’m not sure if this will gain steam with the Putin/ Obama struggle or if it will be the issue for a Hillary run. Regardless, it is a tool, sitting in the hands of the Dems, eager to pull it at the right time.

Allyson Robinson served in the US Army and is now a L.G.B.T. consultant. She made the transition to becoming a female after leaving the military. She says that her greatest struggle was the honor code – “a cadet will not lie, cheat, steal or tolerate those who do.” Yet Allyson did not openly expose to the military that she had gender identity issues. She served and did her job. Should the US military put Putin on hold while transgenders make their transitions to another sex?  What about those serving that are non-transgender? Will they be required to share barracks and showers and dismiss their own privacy in order to accommodate sex-segregated facilities? Are these the kinds of things that the US military should even be dealing with or should they be focused on the security of our nation?  With our recent military cuts, Russia’s invasion of the Ukraine, Bibi and Israel fending off Iran (who by the way is building nukes), North Korea testing missiles and the rest of the world combating Islam extremists, I hardly think  the US Armed Forces should come to a screeching halt and find a way to integrate openly transgender into our military operations. And if you don’t think it is that big of a deal, then please refer back to my first paragraph and click the link to Dejah’s blog.

Although there appears to be no immediate plans to lift the current ban, don’t think that Obama has put his pen away quite yet. Especially now that this report has come out. Look for this to surface sometime in the near future as a distraction for Obama or Hillary leading up to the 2016 election cycle. Dems never seem to let a good crisis go to waste … 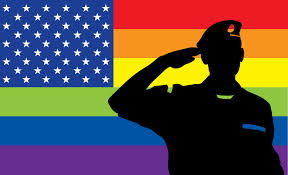