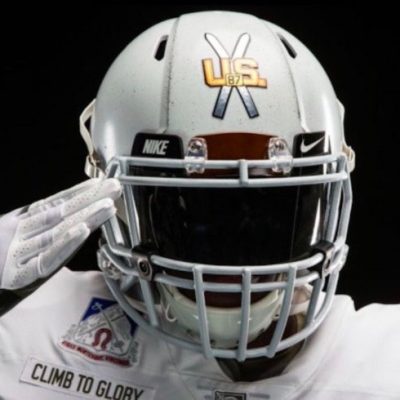 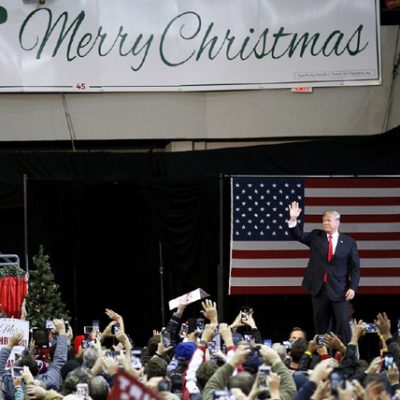 Next post
Trump Demands a Reporter Be Fired. That's Wrong on So Many Levels. [VIDEO] 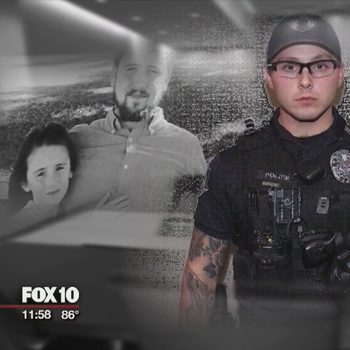 Daniel Shaver, a father of two, was murdered by a former Mesa cop named Phillip Brailsford. Brailsford was found not guilty Thursday. He murdered a man in cold blood and he walked.

As the jury learned, Shaver had invited a man and woman up to his room for drinks before police got there, and was showing them an air rifle he sometimes used to kill birds. The other man eventually left, leaving just Shaver and the woman in the room.

Excerpts of Brailsford body-cam footage can be seen on YouTube; a judge ruled that the shooting sequence could be edited out of the public version.

One of the officers called loudly down a hallway for the “female to step out,” warning that he might send in a dog.

In the parts not shown, but described by authorities, the officers ordered the occupants to crawl out of the room on their hands and knees. When Shaver came out — unarmed — he moved a hand toward his waistband, perhaps to pull up his shorts.Brailsford fired his AR-15 five times, killing Shaver instantly. Brailsford told investigators he had felt threatened by the man. He testified during trial proceedings last month that he was just doing what he was trained to do.

Trained to do? Well this is straight up bullshit. This cowardly, tiny penised, piss poor excuse for a human being, along with five of his buddies, tormented and murdered Daniel Shaver who was sobbing and BEGGING FOR HIS LIFE. Training and supervision are a joke if six cops could not handle an impaired suspect.

So to recap, there was a drunk guy acting drunkenly and these guys tormented and murdered him in cold blood. The murderer and his FIVE buddies caught it all on bodycam. Which was not shown at trial. One has to wonder what these six cops do when there is no camera. And why the hell they came running up with AR-15’s. To a damn hotel.

So who is the murderer named Phillip Brailsford? According to the Arizona Republic here, he was a rising star in the Mesa PD. He also was apparently an LDS returned missionary. Goes well with the You’re Fucked motto that was engraved on his AR-15 dustcover, right? One of these things is not like the others. And NOBODY realized this murderer was unfit to be a police officer? 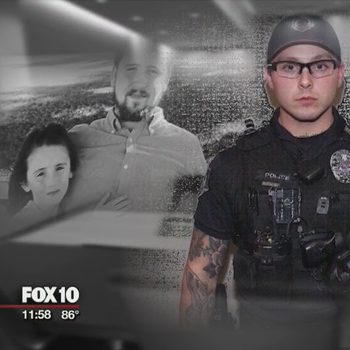 Disturbing details about the case emerged throughout the police report, which was released Tuesday as well. Shaver was heavily intoxicated and pleading for his life just moments before Brailsford fired his AR-15 patrol rifle, and a follow-up investigation revealed that the phrase “You’re F–ked” was etched onto the weapon.

Brailsford was fired by the department on March 21 in connection with the fatal shooting. The department also cited the inappropriate etching on the rifle as a violation of the department’s service weapons policy. 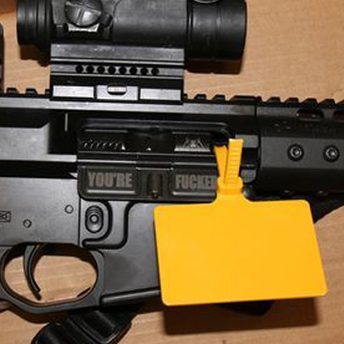 If this was a service weapon, did nobody inspect the firearm, ever? Did his training officer and fellow officers ignore the message? It is painfully obvious that Mesa PD does not perform psych evals on prospective and current officers. And they need to. Badly. And their training sucks. Protect and Serve, my caucasian behind.

Personnel files paint a different picture of the young officer, though. He appeared to be a high achiever who scarcely received criticism from his employers or the public.

Brailsford graduated from Mesa Desert Ridge High School in 2009 with a 3.5 GPA, going on to serve as an LDS missionary in Ecuador between 2009 and 2011.

He enrolled in Mesa Community College and the Arizona National Guard before being hired by the Mesa Police Department in 2013.

Well, that is spiffy. I do not think the is a model of a modern Mormon leader. And Mesa Arizona is unsafe. For all of us. Their training and retention policies are toxic and, as we see, lethal. The Making of a Murderer may be the motto for this department. Not “We believe in partnering with our community to prevent and reduce crime and to ensure procedural
justice by building trust, showing respect, and preserving human rights.” Y’all might want to try for the latter by preventing the former. By training your officers in crisis response on a case by case basis. People who are impaired are in mortal danger in Mesa if this assclown was one of your best.

This is especially dangerous to anyone who is physically or mentally impaired. If you wonder, here are three specific examples.

1. My seventy-seven-year-old mom is severely hearing impaired. She may be able to hear with hearing aids, sometimes. In a hotel, there is a very high chance mom could not hear Paul Blart Mall Cop and his grinning buddies. Here is what happened in Oklahoma. This Cop walked.
2. Diabetics. Any of you diabetic? Ever have a hypoglycemic episode? One fun sign of hypoglycemia makes the person disoriented and combative. Or, in Maricopa County, Arizona, murdered. And the cop walked, but the American Diabetes Association made sure officers know how to recognize hypoglycemia.
3. Downs Syndrome kids. He was watching a movie. Death by asphyxiation while he cried for his mom. And the cop walked.

The video is sickening. I could not watch it without cycling between horror and deep visceral rage. There may be a Black Lives Matter sign on my damn lawn for this reason. IF Black Lives Matter is trying to prevent these kinds of atrocities, I am all for them.

As you can guess, I am pissed. And hope you wonderful readers will be, too. A cop being corrupt, especially being a murderer, hurts everyone, especially the wonderful men and women in law enforcement. And there are many good cops who are trained to appropriately handle a crisis. They work with the impaired, whether physically, mentally, or under the influence. A good cop is trained to handle situations. These officers are unamused.

Here’s a photo of Officer Phillip Brailsford’s rifle that has the inscription “You’re F…..” It’s the gun he used to kill Daniel Shiver in 2016. This should’ve been a red flag to Brailsford’s supervisors. pic.twitter.com/BuBqfADZy9

Then this tweet described a more likely scenario. Brailsford’s daddy’s friends gave him the best defense money can buy.

Phillip Brailsford knowingly gave commands that he knew would be impossible to follow completely. His only goal was to fabricate a situation to his own liking so he could fire on a suspect. @MesaPD you should reconsider your officer’s training. #DanielShaver

#PhillipBrailsford is a disgrace to all police officers and your department as a whole. You let him go into the field with an AR-15 and a homicidal attitude, #DanielShaver ‘s death is on you all. Why would I visit Mesa with you maniacs on the streets? https://t.co/KGV6PPV1R3

My heart just breaks for the Shaver family, especially Laney and their babies. I cannot imagine how hard it is for a four- and six-year-old to know daddy was murdered. By a police officer. And how much harder this Christmas just became for the family. Here is a GoFundMe page for the family. Who has a lonelier Christmas.

My words to Phillip Michael Brailsford are not family friendly. I do not want him dead: I want him alive and realizing what he did. Not skating free and ending up in the Pleasant Grove PD up in Utah. Please put this creature on the No Not Hire list for cops. A big chicken dinner would be nice for his national guard time, too. He is a dangerous wuss with an AR-15. Compensating for something for sure…

To the City of Mesa: six murderers against an unarmed drunk man pleading for his life is not “building trust, showing respect, and preserving human rights.” It is something people I grew up around who escaped communist countries recogniza. It is something men and women with numbers on their arms remember. The murderer and his group of loathsome, cowardly small-pricked individuals is the very model for how ordinary people committed mass murder: he found Mr. Shaver to be not quite human. Untermenschen. So he eliminated him. Despicable, indeed. Hoping the federal courts put this POS in USP Victorville. And that the Shaver family has some peace.