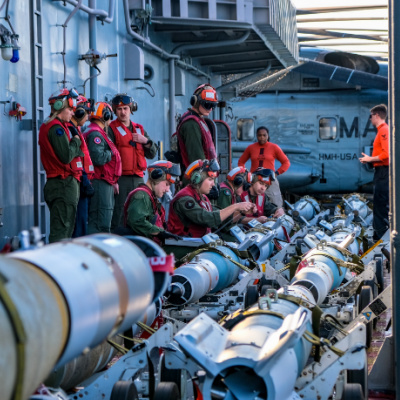 The United States Military Industrial Complex is unprepared for a sustained war and would run out of munitions in a week, according to the Center for Strategic and International Studies. You and I, fellow sentient beings, knew that without war gaming. We have watched it happen.

We knew this, but to see it written in such stark terms is still a gut punch, especially for those of us “military-aligned” with loved ones currently serving. The Center for the Strategic and International Studies (CSIS) released the report “Empty Bins in a Wartime Environment: The Challenge to the U.S. Defense Industrial Base” yesterday. The topline reads:

The U.S. defense industrial base is not adequately prepared for the international security environment that now exists. In a major regional conflict—such as a war with China in the Taiwan Strait—the U.S. use of munitions would likely exceed the current stockpiles of the U.S. Department of Defense. According to the results of a series of CSIS war games, the United States would likely run out of some munitions—such as long-range, precision-guided munitions—in less than one week in a Taiwan Strait conflict. The war in Ukraine has also exposed serious deficiencies in the U.S. defense industrial base and serves as a stark reminder that a protracted conflict is likely to be an industrial war that requires a defense industry able to manufacture enough munitions, weapons systems, and matériel to replace depleted stockpiles.

Here is the video from the CSIS explaining the results:

Deterrence saves lives and is the name of the game. Peace through strength, sound familiar? China has been talking big, again, about Taiwan as Deanna wrote last summer. Ain’t nobody askeered of Sleepy Joe Biden. Not after the Afghanistan withdrawal debacle. Thirteen dead troops and scores more injured. Not to mention the $7 billion in equipment left behind.

The next paragraph from the topline report:

As timelines for a possible conflict in Asia shrink, the goal should be to support the production capacity required to enable the United States and its allies and partners to deter and, if deterrence fails, fight and win at least one major theater war—if not two. “Just in time” and lean manufacturing operations must be balanced with carrying added capacity. The U.S. Department of Defense, in coordination with Congress, should develop a plan now that involves taking steps to streamline and improve production, acquisitions, replenishment, Foreign Military Sales, ITAR, and other policies and procedures. A revitalization of the defense industrial base will not happen overnight for the United States or its allies and partners. It is time to prepare for the era of competition that now exists.

Just in time delivery works for household cleaning and health and beauty and beauty products. It does not work for bullets and beans or Long Range Anti-Ship Missiles (LRASM). The U.S. Department of Defense is too busy. Milley is giving aid and comfort to China and is studying his “white rage”. There was a day when our military won wars and Generals had accountability.

We are not prepared for any conflict.

"We’re not going to just shoot the sons-of-bitches, we’re going to rip out their living Goddamned guts and use them to grease the treads of our tanks.” -General Patton pic.twitter.com/1MSYf9xBRD

Speaking of no accountability, last we heard from Secretary of Defense LLoyd Austin, he was pleading with Congress for a budget:

Defense Secretary Lloyd Austin on Monday urged lawmakers to pass a full-year budget for his department as soon as possible, warning that another short-term spending extension could imperil military readiness and family support efforts.

“If the [current budget extension] extends beyond December, we may be forced to reduce accessions or permanent change of station moves, impairing our ability to meet our missions and causing unnecessary disruption to our families and our ability to recruit personnel,” Austin wrote in a letter to House and Senate leaders.

Eff them all. No one, and I mean no one, at the Pentagon is thinking strategically. Our kids are unprepared for anything but Gender Studies, which they can’t read. Our border is overrun and the low skilled illegals won’t be any help. Puddin’ Head Joe doesn’t know where he is. This recruiting parody from the Babylon Bee is not parody-like. Watch it here.

This report from the Center for Strategic and International Studies better wake some people up.