Iraq is burning, a previously non-existent chemical weapons stash has been absconded by very bad people who want to kill us, Americans are being persecuted by the IRS, the whole administration is nothing but a bunch of lying liars who lie, but thank God our Dear Leader is focused on real PRIORITIES!

“Today, here in Washington, folks are still debating whether or not to fix our immigration system, even though just about everyone agrees that it is broken,” she said at a naturalization ceremony. “I want you all to know that my husband has made this his top legislative priority because, at the end of the day, this fight isn’t just about principles; it’s about real people.” 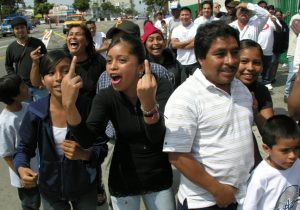 Oh, I see what you mean, Michelle.  You mean “real people” that aren’t AMERICAN people.  American people aren’t his “top priority”.  Got it.  He doesn’t mean people like:

It figures immigration is his “top priority”.  Takes his mind off all the other mind-blowing disasters his reign of irresponsibility has brought to “real” Americans.

Let’s face it.  Michelle’s not talking about “real” people like you and me – average Americans who go to work each day to put food on the table and pay their bills, while being responsible for their lives, their children, and their choices.  You know…the actual Americans who believe in the Constitution and the laws of this country.  As well as the “real” immigrants (not invaders) that want to be citizens for all the right reasons and do it legally.  We are the people who believe if you break laws in this country, you are punished and no one, especially the President, gets to choose which laws to ignore and which ones to enforce.  Or which parts of the Constitution to get rid of.  And she’s certainly not talking about “real” Americans who have high anxiety watching their country slip away in a jet stream of corruption, malfeasance and progressive activism that goes against every instinct of sane “real” people.   Oh, and we can’t forget that if you are even slightly concerned by the outrageous and criminal behavior of this President and his administration, you are a “real” racist.    Just ask her.

To Michelle Obama, her consort and, by extension, their supporters, the only “real” people who matter are the ones invading our country in the biggest Democratic voter registration drive seen in this country.  And I guarantee you, the majority of them haven’t the slightest interest in becoming “real” Americans.

So, when Michelle Obama talks about the priority of “real people”, she is specifically referring to those sterling individuals who are streaming into our country, unchecked and encouraged by this administration, to take disingenuous advantage of our bounty and good will.  She is evidently in favor of “real people” who are vicious gang members.  She’s okie dokie with disease and pestilence  spreading into our country.  She is endorsing and promoting Islamic terrorism that is gleefully taking advantage of a porous and unprotected border.

There’s no “broken” immigration system.  There’s just a President that refuses to secure our border, making every “real” American very vulnerable.  A President that does want he wants, when he wants, and ignores immigration law that he doesn’t like or laws that don’t benefit the grand progressive scheme he constantly promotes in exact opposition of what “real” Americans want, deserve, and need.

Just remember his wife’s words:  “at the end of the day, this fight isn’t just about principles; it’s about real people.”

At least she’s right about it not being about principles.