Michelle Obama’s trip to Japan didn’t start off too well, as she tripped over a small step while disembarking her limousine and greeting Japanese Emperor Akihito and his wife, Empress Michiko. During this embarrassment, the press cameras furiously clicked.

Adding further awkwardness is the image of Mrs. Obama — standing at 5’9″ — towering over the diminutive emperor and his wife.

Earlier in the day, the First Lady breached protocol when she attempted a hug-handshake with Akie Abe, the wife of Prime Minister Shinzo Abe, as the Japanese First Lady was trying to bow. 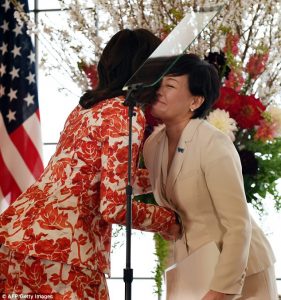 Japanese culture frowns upon excessive physical contact, and bowing has its own strict rules. It appears that Mrs. Obama violated those cultural rules.

It’s not the first time the First Lady has breached another country’s etiquette. In May of 2012 Mrs. Obama put her arm around Britain’s Queen Elizabeth, a woman who typically does not entertain public displays of affection. Rules of Buckingham Palace usually warn against touching the Queen. 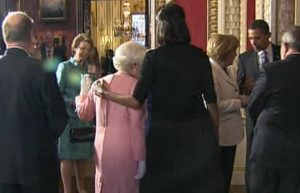 It certainly cannot be helped that Michelle Obama’s height and size have appeared awkward in photos. People — and I think especially women — who fall outside a perceived norm of physical size receive attention they don’t want. But does she not receive directives from etiquette coaches, or does she ignore their advice?

However, what bothers me more than the First Lady is her husband’s protocol in the presence of world leaders.

Such as bowing before the Japanese Emperor: 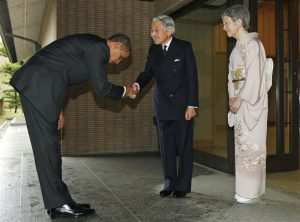 And bowing before the late Saudi King: 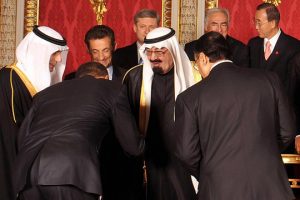 And before Chinese President Hu (who does not reciprocate). 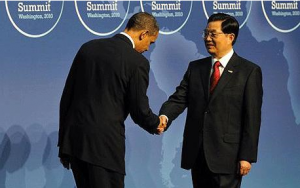 A First Lady appearing déclassé in foreign nations is one thing. A President who lowers the image of the United States by physically lowering himself in the public presence of world leaders is quite another.