Next post
Panjshir May Fall To Taliban With Pakistan's Help 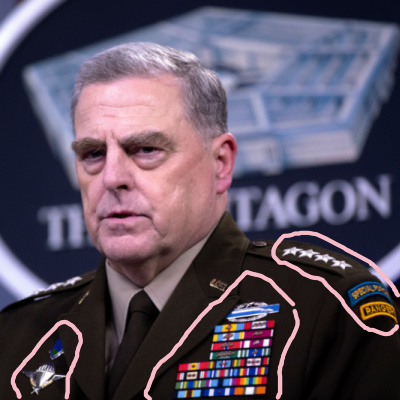 by Toni Williams in politics 29 Comments

Chairman of the Joint Chiefs of Staff, General Mark Milley, granted an interview to Jennifer Griffin of Fox News Channel. Maybe he thought he would find a sympathetic ear. Maybe Griffin just let Milley talk and he hung himself with his words. Milley confirmed in the interview that he doesn’t give a spent shell about our military personnel, our national reputation, or his honor.

On his chest, Mark Milley wears an enormous amount of “fruit salad”. Fruit salad is military slang for the amount of ribbons, medals and devices on the dress uniform. With that many colorful ribbons, the public would be led to believe that Milley is possessed of intestinal fortitude. Maybe when faced with bullets on foreign soil, he is. He has proven time and again that against the vipers in the swamp that is Washington, D.C., he sinks like a leaky canoe.

He walked across Lafayette Square, with President Trump, to the Church damaged by BLM and Antifa and apologized for it, unnecessarily. Milley also talked about a “Reichstag moment”, according to a book by two Washington Post staffers:

“This is a Reichstag moment,” Milley told aides, according to the book. “The gospel of the Führer.” …
If someone wanted to seize control, Milley thought, they would need to gain sway over the FBI, the CIA and the Defense Department, where Trump had already installed staunch allies. “They may try, but they’re not going to f—ing succeed,” he told some of his closest deputies, the book says.

Worse than that, Mark Milley denigrated all of our military personnel with his “white rage” testimony. Since Joe Biden became the Oval Office resident, Milley has gone along with every thing President Asterisk wanted. No push backs. No leaks. No plotting. No throwing his rank on the desk and saying, “Not on my watch.”

In the last couple days, our Victory Girls Blog writers have told you about child brides being imported into the United States, Americans held hostage in Afghanistan, and the brave Afghan Special Forces still fighting after our Pentagon abandoned them.

Apparently, nowhere in Milley’s military education did they cover the First Law of Holes. Mark Milley just keeps digging and digging. And, Jennifer Griffin handed him the shovel in her interview. Griffin interviewed Milley at Ramstein Air Base where the Afghan refugees are being vetted in a tent city built by the U.S..

Milley told Griffin that he is “comfortable” with the vetting of the Afghan refugees:

So I talked to the security folks. You saw it. So what they’re doing as people come in, they’re getting their names registered. They’re doing the biometrics. They check their irises. They do their fingerprints. They take a full facial photo. They run that against the 20 years of databases that we have in the interagency. They run it against the NCTC checks and the FBI checks.

FBI and the NCTC (National Counterterrorism Center)? Excuse me, but these people are not exactly the gold standard of competency. Many of these people don’t have a passport or a birth date.

Next Griffin asked about the possibility of a civil war in Afghanistan. His answer:

Well, you know, this is something that I’ve thought a lot about. And – and I personally think that my military estimate is, is that the conditions are likely to develop of a civil war. I don’t know if the Taliban is going to able to consolidate power and establish governance. They may be maybe not. But I think there’s at least a very good probability of a broader civil war and that will then in turn lead to conditions that could, in fact, lead to a reconstitution of al Qaeda or a growth of ISIS or other myriad of terrorist groups.

So I think the short answer to your question is we don’t know yet. But the conditions are very likely, in my opinion, that – and I’ve testified this and I’ve said it in public – that you could see a resurgence of terrorism coming out of that general region within 12, 24, 36 months. And we’re going to monitor that.

Given that Milley thought the Afghan Regular Army would last longer than 11 days. That means his estimate of terrorism from the general region is worth jack. So let’s make that 12 month minimum about three months.

This, though, was the money paragraph for me:

So war is a horrible, terrible thing. And I said this the other day in the press, it’s a vicious, brutal, unforgiving human endeavor. None of it’s good. None of it’s good. And none of us like it. Or those of us who serve hate it. But I can tell you with a high degree of certainty that the troops that have fought in this for 20 years, they made a difference. They absolutely made a difference. They protected the United States from a kind of terror, from a terrorist attack for two decades. Their efforts were not in vain.

Their efforts were brave. Their efforts were not in vain. They will be remembered as the heroes that they are. Mark Milley’s hubris, lack of intestinal fortitude, and fear of retribution from the Swamp led to this: