March for Life: An Interview with AUL’s Charmaine Yoest

March for Life: An Interview with AUL’s Charmaine Yoest

Since the annual March for Life will be held in Washington, D.C. tomorrow, Wednesday, January 22, 2014, the pro-life movement is especially prevalent in the news this week.  The March for Life has been held on the anniversary of Roe v. Wade every year since 1973.  Charmaine Yoest, President and CEO of Americans United for Life (AUL) has been a driving force in many of the strides that the pro-life movement has made in recent years.  Charmaine has been profiled in various publications, from the Washington Post and the New York Times to the Christian Science Monitor.  We at Victory Girls are delighted that Charmaine graciously agreed to be interviewed. 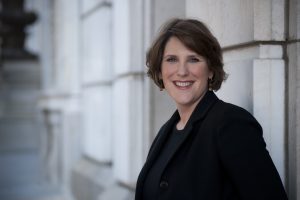 Victory Girls:  The pro-life movement is gaining a lot of ground with young Americans.  So much so that it has caused a rift with abortion advocates, and even Nancy Keenan, former president of NARAL, commented on it.  Why do you think so many young people are finding themselves drawn to the pro-life movement when, in the past, they supported abortion?

Charmaine Yoest:  This is the post-sonogram generation.  They grew up with their “first” baby picture being a sonogram hanging on their parent’s refrigerator.  Even more so now, those sonograms are posted on Youtube, set to music, and shared with the whole world with a click of a button.  You never hear abortion advocates talking about “a clump of cells” anymore because the argument that the fetus has no moral weight simply won’t hold anymore.  Young people have a finely-honed sense of social justice.  And the cognitive dissonance is too acute when we contrast two realities: in the very same hospital we see the full intensity of American medical technology working to save a baby on the edge of viability before birth, while down the hallway another baby at the same stage of development can be arbitrarily destroyed through abortion, for any reason.

Victory Girls:  Time magazine had an article last year saying that abortion advocates won a major victory in Roe V. Wade and have been losing ground ever since.  Would you agree or disagree with that?  Do you feel that pro-lifers are currently winning?

Charmaine Yoest: I completely agree.  Sometimes pro-lifers get discouraged that we’ve been fighting this issue for over 40 years now.  But when you look at it from another perspective you have to ask why are we still fighting?  The abortion lobby likes to argue that Roe is “settled law.”  And yet when you look around our country today, the evidence is that this issue is anything but “settled.”  Americans are still unsettled about abortion.  We have not accepted abortion as an everyday, blasé occurrence.

Victory Girls:  What do you think that pro-lifers need to understand about the pro-abortion movement in order to be better equipped to win the fight for life?

Charmaine Yoest: We need to understand that the abortion movement is Big Business.  At the heart of their activism is a crass union of profit and ideology.  And women become the victims of a heartless machine that advances its own profits and a harsh, uncompromising ideological agenda at the expense of women’s health.  It’s a tragic irony that they are destroying women’s health while claiming to defend women.

Victory Girls:  What do you think is causing the very public rift between older leaders of the pro-abortion movement and the younger up-and-comers?

Charmaine Yoest:  I think the abortion movement is becoming increasingly desperate as they see themselves running out of arguments to make that aren’t patently ridiculous.  With the increased sophistication of the sonogram and the advancement in prenatal surgery, it’s obvious to everyone now that the fetus is far more than a clump of cells.  That’s why you never hear them ever talk about abortion; they always talk about female empowerment instead.  It’s always a dodge and weave and shift the argument.  Just this week we heard arguments in the Supreme Court in the McCullen v. Coakley case which is challenging Massachusetts’ attempt to enforce a “no pro-life speech” zone of 35 feet around abortion clinics.  The abortion movement hasn’t been able to win a decisive victory; so they are resorting to coercion – to using the force of the state to impose their ideological agenda.  We see this coercive effort in the movement to force Pregnancy Resource Centers to post signs saying they don’t do abortions.  And we see the coercive nature of Obamacare, where they want to normalize abortion as health care and force all Americans to subsidize it.  For proof, look no further than the cozy relationship between Planned Parenthood, the abortion giant, and Obamacare.

Victory Girls:  What kind of resources and support would you recommend offering to a woman considering abortion who feels she has no other choice?

Charmaine Yoest:  An interesting dynamic is the dwindling number of abortion clinics compared to the growing numbers of Pregnancy Resource Centers.  There’s a clinic to help pregnant women in every state in the nation.  An easy way to get connected with one of them is thru OptionLine: Connecting with a pregnancy center that is committed to helping women is a way of making the idea of “choice” a reality.  Abortion really is the opposite of choice.  Most women turn to it out of a sense of being alone and hopeless. As a pro-life movement we are committed to trying to help in that moment.  I think one of the reasons that abortion is so tragic is that it says to a woman at her lowest moment, when she feels most alone and hopeless, that destroying her baby is her only option.  I think we can do better than that.

I would also mention that there are some wonderful groups for women who feel betrayed by the abortion lobby.  Their choice to have an abortion was not the answer they thought it would be.  And they feel devastated.  There is help and hope for these women too.   One is Rachel’s Vineyard.   Another is Silent No More.

Victory Girls:  What makes the March for Life so successful each year with over half a million Americans attending from all over the country?

Charmaine Yoest:  I think the March is a great example of how this issue is still “unsettled.”  It’s such a great way for Americans to take a stand and say that we care.  It’s particularly impressive because the crowds are so young!  Nancy Keenan — the former President of NARAL that you mentioned above — said that her decision to resign from NARAL began with noticing how young the marchers were several years ago.  The pro-life movement is dynamic and energized, and you can feel it in the crowds singing and marching up Capitol Hill to stand in front of the Supreme Court.

Victory Girls:  How would you answer those in the abolitionist movement who claim that pro-lifers still allow abortion by fighting for regulation instead of abolishing abortion altogether?

Charmaine Yoest:  If we could abolish abortion tomorrow altogether, that would be a wonderful thing.  But I’m a big believer in focusing on the achievable.  We have not yet convinced a majority of Americans that Roe should be overturned.  Nevertheless, the abortion lobby is running scared because they know that Americans are not happy with the status quo either.  We are one of only FOUR countries in the entire world that allow abortion for any reason through all nine months of pregnancy.  Which ones are the other three?  North Korea.  China.  And Canada.

We are gaining traction by relentlessly moving the ball down the field.   The colorful football coach Woody Hayes was known for a strategy called  “Three yards and a cloud of dust.”  Today he’s in the College Football Hall of Fame for winning 5 National Championships.

Victory Girls: How can we better leverage some of the scandals surrounding renegade abortionists such as Dr. Gosnell, and help younger women to understand the deep disrespect that many practitioners – even those whose offices look well equipped and “safer” – have for women?

Charmaine Yoest: I’m glad you mentioned Dr. Gosnell because we believe that his conviction represents a significant moment in the story of abortion rights.  This is one of the first times we’ve seen real national attention paid to the dark side of legal abortion.  We still have back-alley abortions — and it’s done by the men and women that the abortion lobby treats as heroes.  This last year Jennifer Morbelli died after having a late-term abortion in LeRoy Carhart’s clinic.  He was featured in the “After Tiller” documentary that was highlighted at the 2013 Sundance  Film Festival.  He is treated as an abortion-rights hero.  But when Jennifer Morbelli was dying in an emergency room in Maryland after having an abortion in his clinic, LeRoy Carhart was on an airplane flying out of state.

AUL has released The Women’s Protection Project as a response to the real-life abuse of women in today’s legal abortion back alleys.  We are working to equip state legislators with the information they need to pass Constitutionally-sound pro-life legislation.  And we want to empower ordinary Americans who live in communities where some of these abortionists are hurting women.  We’ve introduced an “enforcement module” with this project that enables people to hold abortionists accountable for operating within the law, when their local authorities are unwilling to do so.

Thanks, Charmaine, for your insightful replies.  Congratulations on the inroads you’ve made in the fight against the pro-abortion movement.