Liz Cheney Kicked To The Curb By WY Voters

Next post
Palin And Alaska Wait For Election Results

Liz Cheney Kicked To The Curb By WY Voters 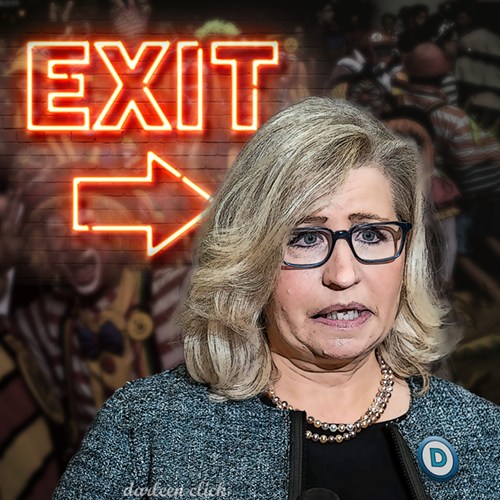 Well, it’s been a night for Liz Cheney. She dug her heels in and decided the ONLY issue her Wyoming constituents needed to be concerned with were the events of January 6.

As our readers know, she proclaimed that January 6 will now happen every four years for whatever reason. She’s never been asked, but I’d sure like to find out how her reasoning arrives at that conclusion.

That said, January 6 is and has been her only focus. Except Wyoming voters have many other concerns that take precedence.

Yet we are supposed to believe that Liz has been a major champion for all the concerns that Wyomingites live and breathe. Oh really?

Rep. Liz Cheney — the once-high-ranking Republican who defied her party to wage a lonely crusade against former president Donald Trump — braced for a potentially resounding defeat Tuesday in her primary while framing it as “the beginning of the battle” for the future of American democracy.

Harriet Hageman, a lawyer with Trump’s endorsement, headed into the day as the overwhelming favorite, according to observers, widely expected to win the GOP nomination for deep-red Wyoming’s only House seat despite Cheney’s appeals to Democrats and independents to re-register as Republicans and vote for her. The race marked the last primary challenge to a small group of House Republicans who voted to impeach Trump last year and are mostly set to leave Congress after withering backlash.

Yes, as we noted not long ago, Liz desperately wants votes so she endorsed sending out mailers to WY voters, DEMOCRAT WY voters to urge them in the open primary to register Republican momentarily in order to win. Except that even Wyoming’s Democrat party chair admitted to The NY Times, there wouldn’t be enough votes.

As for the “small group of House Republicans”…who is in that group? One of note is Adam Kinzinger who is already out of a job, yet persists with Liz on the January 6 committee. Great company. Stellar! What any of that truly has to do with the very REAL issues Wyoming citizens face every single day is never answered when Liz is asked about it.

For example, every single sitting Wyoming Congressman has been afforded a major seat on the Natural Resources Committee. Liz turned it down. I didn’t know that until just the other day. Liz turned down a major committee seat.  Oh, but her sitting on the Armed Services seat helps us!

Not in Wyoming it doesn’t. Don’t me wrong as a daughter, wife, and more of many who’ve served, this is an issue. Yet what Liz did is say NO to being handed a major seat on the Natural Resources Committee. What is that?

A committee that looks out for private property rights, the oil/gas/natuaral gas industry, the agriculture industry, water rights, fishing/hunting and more. Wyoming’s industries are predicated on all of the above and she … said NOPE.

Quite honestly, I wished I’d known long ago of her refusal to stand for WY land and property rights as it would’ve changed votes in her last election.

That said. Harriet Hageman ran a brilliant campaign in Wyoming. Why? She showed up. More importantly, she LISTENED. As mentioned above, those are among the most important issues Wyoming constituents face, but Liz Cheney insisted that the ONLY issue we all need to be concerned about was January 6.

I don’t need to litigate January 6 anymore other than to say, Liz chose her path. She chose wrongly. She read the room wrong. More importantly, she forgot one of THE most important things one should do and be as an elected official.

The needs of your constituents are what matters most. Liz chose to focus on a singular event and has believed for 2 1/2 years that that is ALL Wyoming voters want to hear about.