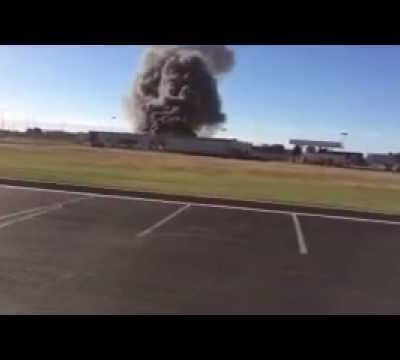 Next post
Plane Crash At Wichita Airport, At Least 2 Dead

A few days ago, the Washington Post published a list of states in which one can vote without any form of ID.  La Raza, the pro-illegal, pro-reconquista, anti-American group jumped on it yesterday and ensured that illegals knew exactly where they could go to vote, even though they should not be here at all.  (If you’re new to the party, you can check out Robert Stacy McCain’s article on La Raza here.)

The Chicago chapter of Asian Americans Advancing Justice tweeted Blake’s article with the message, “Reminder — #Illinois does NOT require #voterID to cast a ballot,” along with the pro-Democrat hashtag #TurnOutForWhat. The tweet was helpfully retweeted by the National Council of La Raza.

Why would race-based groups want to ensure that people get to the polls regardless of whether they have ID or not?  Simple: because they don’t care if they are here legally or not.  And how will these people with no ID vote?  The answer is in the tweets themselves–pro-Democrat hashtags.  The manipulation is clear: vote Democrat, so you can have more free stuff.  No need to speak English, no need to assimilate or “be subject to the powers thereof,” just go on down to the polls and cast your vote.  We’ll even help you decide who to vote for.  You don’t need to understand the issues or even have a clue about the country’s history, political process, or what’s at stake.  All you need to do is show up, pick the guy with the D next to his name, and you can walk out feeling proud that you have secured free everything for yourself, your children, extended family, and whoever else you can get across the border, including any diseases and/or criminal activity you might be involved in.

Considering multiple voting machines are also mysteriously suffering from “calibration errors” that change people’s votes from Republican to Democrat candidates, it seems that this election is bound to be full of the same hijinks we have come to expect from the Democrats…which brings me to my next point.

Conservatives are in a nasty situation right now.  We are continually bombarded with candidates that make RINOs look conservative, and then we are bullied—yes, bullied—by the mainstream Republicans to ‘vote red no matter what.’  Well, we certainly aren’t going to vote blue, but is it too much to ask that we get a decent liberty-loving candidate?  Conservatives who fall into the Tea Party, Constitutionalist, Declaratist, or even 3%-er groups are given a liberal-lite candidate and then told that they should vote for them anyway because anything is better than a Democrat.  But is it really?  What’s the difference in the letter after their name if they’re supporting the same measures and voting for the same liberty-stealing laws?  You can vote Republican all day long, and still end up just as oppressed as if you voted for Nancy Pelosi six times at one election.

Here’s the point: we are already going to be besieged with rigged voting machines, intimidation, illegals/dead folks/felons/dogs voting.  In order to beat all of that—if it’s even possible—we need to put up candidates that actually understand the Constitution, believe in it wholeheartedly, and are willing to go all the way in supporting it.  Even when it’s hard, even when it means standing up to the establishment.  We get those candidates by doing our job at the primaries, by supporting them at the beginning—NOT by simply showing up on voting day, dropping our R vote, and hoping the machine doesn’t change it before you’ve even had a chance to put your “I Voted!” sticker on.

And if all else fails, we still have one other option left…and it’s not “voting for the lesser evil.”  Time will tell if we have the stones for it.