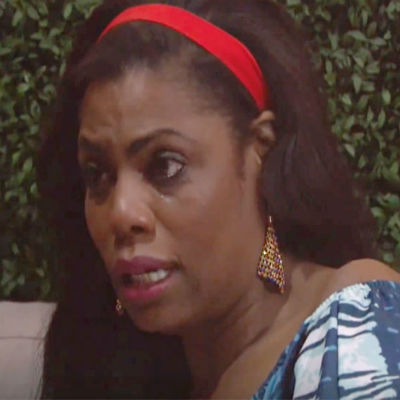 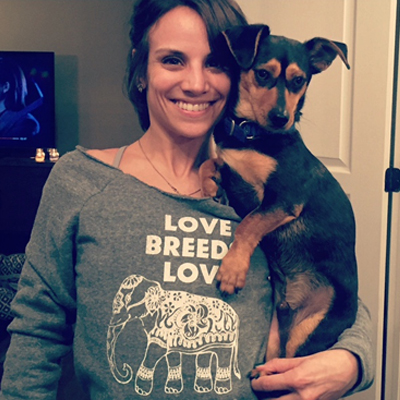 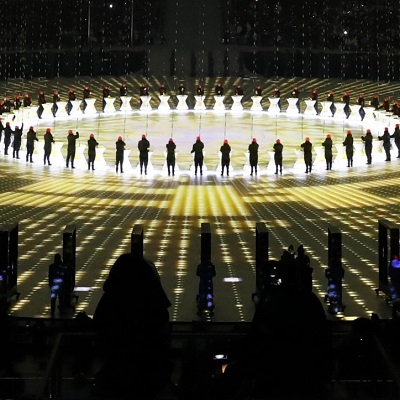 The Olympics have begun, preempting all my favorite TV vices (about three of them), and of course, the left just had to make it into an eye-rolling political clown show! I remember as a kid who was new to this country, watching the Olympics for the first time in 1984, and being so proud of my adopted country! It was my first summer Olympic games as a US resident, and it was a joy to watch our athlete superstars like Mary Lou Retton, Carl Lewis, Bart Conner, Tim Daggett, and Mitch Gaylord. I knew the names of all our gymnasts by heart. My pride knew no bounds.

Today, I can barely contain my disdain for the shit fest of liberal douchery and social justice wankery that the Olympics have become!

From the whining by US speed skater Shani Davis about the ostensibly “racist” coin toss that deprived him of his entitlement of carrying the American flag during Black History Month, no less, because he is black, and apparently deserves the honor, because RACISM!!11!!! 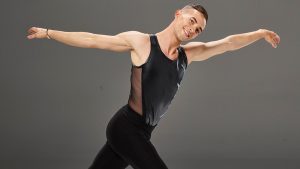 To the nonexistent drama created by the press between Mike Pence and ice skater Adam Rippon, who apparently felt it necessary to explain that he’s in it to represent the gay community (silly me, and here I thought he was there to represent AMERICA) and therefore he must publicly repudiate the Vice President of the United States for supposedly being anti-gay and supporting gay conversion therapy, which is something that was invented by leftist social justice zealots to whip up hatred for Mike Pence.

Conversion (or “reparative”) therapy noxiously tells people, including teens participating involuntarily, that navel-gazing, role-playing, and prayer can “heal” their homosexuality. I’ve been denouncing this fraudulent practice for a decade, since it doesn’t work, misrepresents genuine religion, insults the integrity of queer experience, and tortures innocent youth.

But by definition, CONVERSION therapy (sometimes called “reorientation therapy”) exploits the lie that homosexuality is a curable orientation, not some set of behaviors. A celibate reparative patient who remains drawn to the same sex is an utter failure to the conversion crowd. The “ex-gay” focus on orientation rather than behavior is why the phenomenon is so destructive.

And that’s what the people penning Mike Pence’s Web site (I’ve seen no evidence he wrote it personally) referred to in 2000 when they said federal AIDS money should be redirected “toward those institutions which provide assistance to those seeking to change their sexual behavior.”

Those 14 words are the only evidence Pence’s detractors have proffered to show the man supports conversion therapy. But conversion therapy is about changing sexual orientations, not behavior. That’s why we’ve been fighting it so hard!

Do certain sexual behaviors make certain people more at risk for contracting HIV? Of course, they do! So directing public funds for AIDS prevention – a program that, by its very nature, has to focus on behavior – is not at all shocking. But the left is nothing if not determined to paint their conservative enemies with the broad brush of racism and homophobia, so instead of lauding Pence for at the very least trying to address a public health issue, they simply smear him.

By the way, the above article was written by a gay man, so stick it up your asses, proglodytes!

Of course, Rippon now says he’s willing to meet with Pence, as if the VP should be oh-so-honored to be granted as hearing with His Majesty, but hey… drama is drama.

But I digress… sort of.

The interesting thing about this Olympics is that for the first time in decades North and South Korea are competing as one Korea. This is not the first time the two nations have tried to heal relations between them, so don’t get excited and start crediting Trump with this development – the overtures and planning for a thaw began before Trump whipped his nuclear dick out to threaten that fat little bastard in the North, so mollify your mammaries.

But while Kim didn’t show up to the opening ceremonies, he sent his little sister to attend in his stead, probably because she’s one of the few relatives he has left whom he didn’t murder (and probably consume, judging by his girth and the scarcity of food in his shithole country).  Is Kim Yo-jong as batshit crazy as her brother? Right now, the jury is still out. However, she’s evil enough to have been named the Director of the Propaganda and Agitation Department of the Workers’ Party of Korea, and placed on the US Treasury’s specially designated nationals (SDN) list for participating in human rights abuses, meaning she’s sanctioned by the Office of Foreign Assets Control, and is barred from access to the US financial system, so I’d she’s already a heroine to the American left.

The younger,normally more quiet Kim didn’t waste any time making a spectacle of herself at the Olympics however, giving Mike Pence a side eye that could turn hell into an ice skating rink, because he failed to kiss her ass or give her proper deference or something.

And this  snotty little twat’s nasty look at the VP is what is apparently giving the left a collective orgasm. Yes, please understand this. Because the liberals despise the Vice President for completely fabricated reasons, they are cheering on a woman who is part of a regime that has heartlessly murdered tens thousands of its own people, who has been sanctioned by the US for 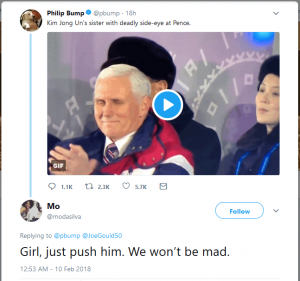 participating in human rights abuses that would make any normal person’s heart ache, because she gave a nasty look to a politician whom they viscerally hate for no reason at all.

They cannot even set their unhinged rage aside for a few moments to unite behind America’s Olympic Team.

Maybe a deranged, incoherent savage, who doesn’t understand what Kim Yo-jong actually is, won’t be mad.

The rest of America, however, might have something to say about the representative of an avowed enemy of our nation physically assaulting our duly elected Vice President.

But hey, you do you, Cupcake. Just don’t expect those of us with a shred of decency and love for our country to applaud your ignorance.

Here’s a proglodyte who believes itself to speak for the rest of the country.

Because all Americans would lick the anus of a woman who, along with her inbred, tyrannical sibling participated in the murder of innocent people, who dared to not genuflect properly in front of the regime, or commit an egregious crime, such as watching an unapproved TV program.

No, you gelatinous mass of ignorant effluvia. Only halfwits with no sense of human decency like you would ever compare a murderous regime that tortures and kills its own people on the whim of a short, fat tyrant to the Vice President of the one country that protects your right not only to speak, but to criticize the government, publish what you will, face a fair trial by a jury of your peers (shouldn’t be hard to find 12 drooling savages like you, right?) should you be charged with a crime, and defend yourself and your family (not that you would ever have the testicular fortitude to do so) against government tyranny.

You could have just stopped at “I never thought,” and we would have believed you.

Then, by all means, join her on the bus home, you fuckwitted ass cracker.

Well, gosh! Maybe you and Miss Kim can get together and go bowling (points for 80s reference). You know… have a girls spa day, get your nails done, murder a few dissenters and use their emaciated bodies to make bone broth for her brother…

So here you have it, boys and girls. The left will cheer for murderers over their fellow citizens. They will laud tyrants over the leaders of the very country that strives to protect the rights so many are deprived of in North Korea. They will root for cruelty, despotism, and totalitarianism over the home team.

Are you surprised at the lows to which they will sink?