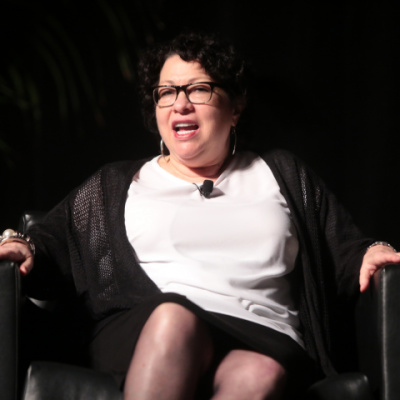 Reuters and Life News are reporting that Justice Sonia Sotomayor has a “sense of despair” and sadness when she thinks of recent Supreme Court decisions. Although she didn’t outright mention the Dobbs Decision returning abortion law to the States, she is a well-known abortion defender. Justice Sotomayor is a fan of killing babies.

From LifeNews, here is the reporting:

Sotomayor and two other justices dissented in the historic June ruling, which overturned Roe v. Wade and began allowing laws to protect unborn babies from abortion again. Research estimates at least 10,000 unborn babies were saved from abortions just in the first two months.

Speaking at the Association of American Law Schools’ annual meeting in San Diego, Sotomayor said she feels “deeply sad” about the new direction of the court, according to Reuters.

“I did have a sense of despair about the direction my court was going,” the Obama appointee said.

Although she did not mention the Dobbs case specifically, Sotomayor talked about feeling “shell-shocked” and “deeply sad” about recent rulings, adding: “It’s not an option to fall into despair. I have to get up and keep fighting,” Reuters reports.

I am still waiting on a “Wise Latina” moment from Justice Sotomayor. You may recall that during a 2001 speech long before her nomination to the Supreme Court, Sotomayor said the following:

“I would hope that a wise Latina woman with the richness of her experiences would more often than not reach a better conclusion than a white male who hasn’t lived that life.”

Better, different, separate but equal. I have never understood the concept despite my Phenomenology professor’s best efforts. Yes, I believe you can understand concepts outside of experience. That means that a “Wise Asian” could come to a wise decision even having never had a “Wise Latina” experience.

Wise has nothing to do with how much Justice Sotomayor loves abortion. Especially the woman part of it. As Kate wrote in October of 2021:

Of course pro-abort activists avoid mentioning anyone involved in abortion other than the woman getting one. If they have to, they will make vague references to the proverbial “clumps of cells,” but never embryos themselves, and certainly not specific developmental milestones like – wait for it – heartbeats. And a favorite talking point of the pro-abort crowd is the very real fact that women often don’t know they’re pregnant by the sixth week — which effectively bans abortions in the state altogether.

Does that “clump of cells” have the potentiality of human life? There’s your answer. And Sotomayor seems confused about when viability begins. She didn’t like the 15 week Texas abortion ban:

For Kagan and the other liberals, the very legitimacy of the Supreme Court may be at stake. On this score, Sotomayor made the point even more starkly. “You want us to reject that line of viability and adopt something different,” she told the Mississippi solicitor general. “Fifteen justices over 50 years have—or I should say 30 since Casey—have reaffirmed that basic viability line. Four have said no, two of them members of this court. But 15 justices have said yes, of varying political backgrounds.” As if to warn that the ship may go down with the whale if Roe falls, she added: “Will this institution survive the stench that this creates in the public perception that the Constitution and its reading are just political acts?”

It is devastating that Justice Sotomayor is worried about a stench from stopping murder than consenting to the continuation of this abomination.

You weren’t born to be a bystander in life because you were born. And, that is the salient point. It is telling that “life” gives Sotomayor a “sense of despair”.