Next post
Judge Rules Against CDC Mask Mandate For Travel 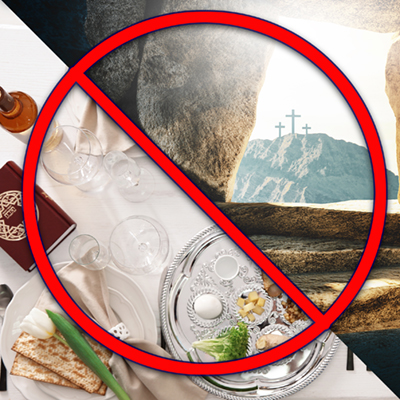 While Christian and Jewish families gathered over the weekend for the most important religious holidays on their respective calendars, like toadstools after a rain, the anti-Bible bigots of the Left appeared to attack both in media and even at the White House.

I think my family and I should have a prayer session next time I am on a plane. How do you think it will end? pic.twitter.com/5696Erwsl5

Understand, that is not her video. Omar is, dare we say, triggered that Christians dare show their faith in public anywhere. As as far as her claim that she wouldn’t be allowed to pray-on-a-plane, why would that be much different when major airports already provide dedicated Muslim worship spaces?

But it wasn’t just Omar hijacking Easter to make it about her pique, we had the New York Times run a screed that takes the 1960’s mantra of “God is Dead” and ups it to “And if He isn’t, Let’s Kill Him.”

The Times op-ed was the work of Shalom Auslander, the author of a book called Foreskin’s Lament: A Memoir, in which he bitterly recounts his Orthodox Jewish upbringing and how he has said goodbye to all that. He does essentially the same thing in the Times piece, presenting some acid recollections of being an eight-year-old learning about Passover, and adding, “In this time of war and violence, of oppression and suffering, I propose we pass over something else: God.”

This is because God’s judgment on the Egyptians in the Exodus story seems to Auslander to be excessive. (snip)

Auslander doesn’t explain, of course, where he thinks he got the moral sense that he used to judge God’s actions in the Exodus account as he understands them. The Times, of course, has no space to consider answers to Auslander’s theological questions, which have been considered by Jews and Christians throughout the ages who were far more thoughtful than Auslander himself is. It does, however, have plenty of space for Auslander’s practical conclusion: “Killing gods is an idea I can get behind.”

Yet the 20th Century saw unprecedented mass murder and genocide on behalf of atheism. A fulfillment, as it were, of Benjamin Franklin’s quote, “If men are so wicked with religion, what would they be without it?”

Which brings us to another kind of religious hate, the stealth kind where it is taken over and erased. Most of us probably skipped the White House’s “People’s Seder” because Kamala, but maybe we should have paid more attention to the mockery of a Jewish religious ceremony that is thousands of years old.

“Good evening to the thousands of you who are joining us from around the country,” Doug Emhoff, the Hollywood lawyer serving as Kamala’s husband, intoned. (snip)

The People’s Seder sounds like a Berkeley commune. A day before the eve of Passover, the administration’s second virtual seder served no function except to give Emhoff something to do. Perhaps knowing that, Emhoff claimed, with a mostly straight face, that he had traveled the country hearing from people “how much last year’s virtual seder had meant to them”.

Emhoff made no mention of the over a dozen Israelis recently killed in terror attacks. Neither, seemingly, did so many of the speakers who rambled on about the importance of “empathy”.

Empathy applies to everyone except the Israeli Jews mourning their dead.

Passover, to Emhoff, proved to be about Ukraine, about the pandemic, and “protecting democracy”. Maybe Emhoff can tell me which democratic process elected Moses.

Among the seder’s guests (and bigots) were a pro-BDS, Reform Hebrew seminary head who doesn’t even believe in the God of the Bible and other ostensible Jews who talked about everything but what Passover is commemorating. One guest, Michael W. Twitty, looked at his seder plate and made the comment that the molasses represented “the transatlantic slave trade.”

It was an exercise in de-Judenizing the most important of Jewish historical narratives. If anti-Semitic bigots can’t bully the Jew out, just co-op his religion.

This is not done innocently or even mistakenly. This, like the Left’s march through media, academia and government, is about transforming America into not-America, where The State is God, Spouse, Family.

Leftism is a jealous religion. It will brook no other.