Next post
How Do You Get on the Government Watchlist?

Where have all the Christians gone? Better yet, where is all the outrage?
Imagine a small country somewhere, anywhere, whether it be tumultuous or peaceful – it doesn’t really matter… and the Christians start a brouhaha and force everyone to either convert, be killed, or leave the country. And if people leave, they have to pay a fine, and only leave with what they are wearing, no personal belongings. Oh, and for fun, let’s say these are Catholics doing this. Oh. MY. Lord. The world would be in an uproar. There would be protests at every church everyday everywhere until someone, mainly our government, interceded and restored calm among the masses. Heh. Pun. Okay, so, let’s say they aren’t Christians because everyone knows that in today’s world, Christians wouldn’t do something so heinous as to put a gun to someones head and say “renounce your filthy ways or die.” Enough with the imaginary. In the real world, this is really happening in Iraq. The culprit is ISIS, and those being driven out are Christians. Convert, pay a special tax (an infidel tax), die, or leave.

Patriarch Louis Sako told AFP on Friday: “Christian families are on their way to Dohuk and Arbil,” in the neighboring autonomous region of Kurdistan. “For the first time in the history of Iraq, Mosul is now empty of Christians,” he said.

Witnesses said messages telling Christians to leave the city by Saturday were blared through loudspeakers from the city’s mosques Friday.

A statement dated from last week and purportedly issued by ISIS that took over the city and large swathes of Iraq during a sweeping offensive last month warned Mosul’s Christians that they should convert, pay a special tax, leave or face death.

“We were shocked by the distribution of a statement by the Islamic State calling on Christians to convert to Islam, or to pay unspecified tribute, or to leave their city and their homes taking only their clothes and no luggage, and that their homes would then belong to the Islamic State,” Sako said.

The patriarch, who is one of the most senior Christian clerics in Iraq, and residents contacted by AFP said Islamic State militants had in recent days been tagging Christian houses with the letter N for “Nassarah”, the term by which the Koran refers to Christians.

The statement, which was seen by AFP, said “there will be nothing for them but the sword” if Christians reject those conditions.

As the Christians leave, ISIS paints the Arabic letter that means ‘Nasrani”, from Nazarene, a word often used to refer to Christians, on their homes. Next to the letter, in black are the words: Property of the “Islamic State of Iraq” 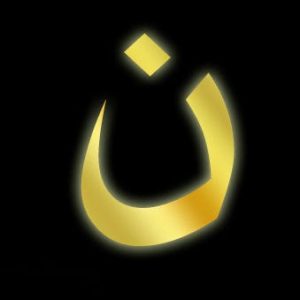 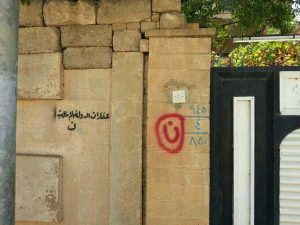 The Islamic State’s leader, Abu Bakr al-Baghdadi, held a sermon in Mosul’s grand mosque two weeks ago calling on all Muslims to unite behind his group. Since ISIS has taken over in June, strict Sharia law has been implemented and women have been forced to shroud themselves in full burqa. Women have absolutely no rights in Sharia law. This puritanical ideology is so off-putting that some of the Muslims in the area are leaving as well. As the Christians were fleeing the city of Mosul, checkpoints were set up whereupon they were stopped, searched, items of value were stolen, money, jewelry, suitcases were thrown aside, they were forced to leave  with only the clothes they were wearing.
They were welcomed in the northern Kurdish provinces of Irbil and Dohuk. Although the Kurdish region is a part of Iraq, they have separated themselves and have implemented self-rule. They are also protected by their own Kurdish Security Forces.

From the New York Daily News

Irbil’s governor, Nawzad Hadi, has pledged to protect fleeing Christians and other minority groups. The territory is currently home to more than 2 million refugees and internally displaced people from Iraq and Syria, according to the United Nations.

Since the time of Christ, over 2000 years ago, there have been Christians in the region. 1.5 million Christian people have been displaced in Iraq since the Iraq war began, 500,000 have fled since June when ISIS  took control. The last holdouts, 3,000  in Mosul were the last to leave.

And then there were none.