Previous post
Quote of the Day: When Hysterical Feminazis Strike

Is Trump A Hypocrite Regarding Foreign Workers? 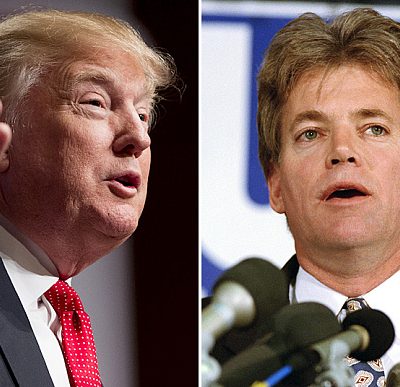 Is Trump A Hypocrite Regarding Foreign Workers?

The New York Times is reporting today that Donald Trump, who talks about making companies bring back jobs that they’ve sent to other countries (how he will do this, he never exactly says, except to threaten tariffs) is also the same Donald Trump that has asked for more than 500 visas for foriegn workers at his Mar-a-Lago Club in Palm Beach, Florida.

Since 2010, nearly 300 United States residents have applied or been referred for jobs as waiters, waitresses, cooks and housekeepers there. But according to federal records, only 17 have been hired.

In all but a handful of cases, Mar-a-Lago sought to fill the jobs with hundreds of foreign guest workers from Romania and other countries.

In his quest for the Republican presidential nomination, Mr. Trump has stoked his crowds by promising to bring back jobs that have been snatched by illegal immigrants or outsourced by corporations, and voters worried about immigration have been his strongest backers.

But he has also pursued more than 500 visas for foreign workers at Mar-a-Lago since 2010, according to the United States Department of Labor, while hundreds of domestic applicants failed to get the same jobs.

Trump, when asked, has an explanation:

Asked why his club must seek so many foreign workers when Americans have applied for the same positions, Mr. Trump said in a telephone interview from Mar-a-Lago this month: “The only reason they wouldn’t get a callback is that they weren’t qualified, for some reason. There are very few qualified people during the high season in the area.”

But he refuses to accept that same excuse from anyone else. And his own immigration policy on his own website condemns the practice of hiring foreign workers on visas.

Requirement to hire American workers first. Too many visas, like the H-1B, have no such requirement. In the year 2015, with 92 million Americans outside the workforce and incomes collapsing, we need companies to hire from the domestic pool of unemployed. Petitions for workers should be mailed to the unemployment office, not USCIS.

The New York Times points out that Trump’s club has only hired 17 people from the local population.

Mr. Trump and other resort owners use a type of visa, designated H-2B, for temporary, low-skill, nonfarm workers; there is a nationwide limit of 66,000 such visas a year.

Before it can be granted approval to hire foreign workers through H-2B visas, an employer has to advertise the openings on a state website of job listings and twice in a local newspaper, and to report the number of local applicants and hires to the federal government.

According to records Mar-a-Lago submitted to the Labor Department, it had received at least 296 local names for 520 seasonal jobs since 2010. Some applied directly to the club; others were referred through a job placement service.

Mar-a-Lago hired 17, about 6 percent of the local applicants, the records show.

I find it hard to believe that the club could ONLY find 17 qualified Americans who wanted the job, but then went for H-2B visas by the hundreds in order to fill all those positions.

Trump supporters, is this acceptable to you? Is this what you want in your candidate? He’s promising to make other companies bring back jobs by punitive measures, and yet makes sure that he’s able to hire hundreds and hundreds of foreign workers for his own uses. That’s called hypocrisy. It’s not “making America great again.” It’s using the laws available to him to get what he wants, again.