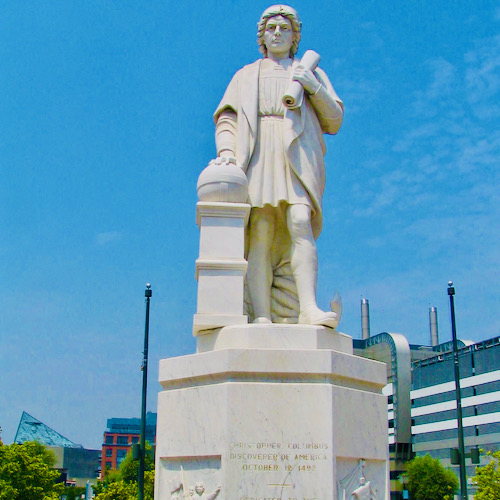 If Christopher Columbus hadn’t decided to sail the ocean blue, we wouldn’t be here. That’s just a simple undeniable fact.

As I said, I’m not here to praise the man but to celebrate his deeds. Columbus taught himself Latin to study ancient and medieval manuscripts for clues about the circumference of the globe and his prospective journeys. True, his calculations were wildly off, overestimating the size of Asia and underestimating the size of the globe. But he also knew that he had to make the mission sound easier, like any startup seeking venture capital. Columbus yearned to fulfill the prophecy of Seneca’s Medea: “An age will come after many years when the Ocean will loose the chains of things, and a huge land lie revealed.” And so he did, in four remarkable voyages that charted and changed the world.

Christopher Columbus realized long before his first voyage, that there had to be another way to trade with Asia. It took years of diplomacy and persuasion to get that first ocean trip funded.

But today, the left rabidly proclaims that Christopher Columbus was so genocidal that all statues of him must be torn down. If the left had its way, they’d try to erase him from history. They already have help from the Biden Administration who pandered to them by proclaiming today as “Indigenous Peoples Day.”

Our country was conceived on a promise of equality and opportunity for all people — a promise that, despite the extraordinary progress we have made through the years, we have never fully lived up to. That is especially true when it comes to upholding the rights and dignity of the Indigenous people who were here long before colonization of the Americas began. For generations, Federal policies systematically sought to assimilate and displace Native people and eradicate Native cultures. Today, we recognize Indigenous peoples’ resilience and strength as well as the immeasurable positive impact that they have made on every aspect of American society. We also recommit to supporting a new, brighter future of promise and equity for Tribal Nations — a future grounded in Tribal sovereignty and respect for the human rights of Indigenous people in the Americas and around the world.

Isn’t that fun? Americans, WHITE Americans, are getting lectured by an old white guy about how we are still racist and the Indians have suffered the most. Do NOT get me wrong, our westward expansion was not without problems. Problems that harmed the Indian tribes Americans encountered. However, what this proclamation and the left REFUSE to recognize is that the Indian tribes themselves all over North, Central, and South America also went to war with each other, engaged in slavery, and were not the first to set foot on this continent.

Back to Christopher Columbus. Keep in mind, in the 1400’s, many in Europe thought the world was flat. And there were only two trade routes to Asia. One overland and the other by sea down around what is now called the Cape of Good Hope.

This is where we should indeed be celebrating Christopher Columbus. His four voyages opened up opportunities that literally changed the world. But the left doesn’t want to recognize this. The left ALSO refuses to recognize that every single European and Asian country at that time practiced slavery. The left decided they didn’t like Christopher Columbus, so he must be erased.

In August a judge ruled that the Columbus statue in Philadelphia must stay and remove the plywood that covered it up. Needless to say, the left is not happy. They’d rather the statue be torn down, destroyed, or stuffed into a warehouse somewhere. Such as this incident in Minnesota last year.

Sculpted by an Italian immigrant who helped build Grand Central Station and his son, given as a gift during the Great Depression as a symbol of the acceptance of Italian immigrants in Minnesota. https://t.co/EviIr85fNk

Christopher Columbus is barely mentioned in most public schools these days. If he is, students are told that he killed and enslaved Indians. The problem is, other than a 525 year old letter, there are exactly ZERO first hand accounts of what he did or didn’t do. And no, Howard Zinn’s atrocious history book doesn’t count as evidence.

Even people who should know history, don’t.

Columbus Day aside, it doesn’t speak well for “technology developed in Europe” if someone was trying to sail to India and instead ended up in the Caribbean. https://t.co/5sSyQzQu9d

I am not saying he did not make mistakes

Calculating, estimating, is not knowing.

No one had ever transversed the globe.

The fact is, if it weren’t for Christopher Columbus setting out across the ocean with his three ships, The Nina, Pinta, and Santa Maria, we would not be here.

Columbus’s discovery of The New World began a cultural exchange that changed Europe and the Americas forever. In his book America: The Last Best Hope, William J. Bennett points out that Columbus’ exploration of America introduced the potato, maize, peanuts, and turkeys to Europe, forever revolutionizing their farming practices, and Europeans introduced apples, grapes, and horses to the new world. The horse alone would become an essential element to the culture of many Native American tribes, such as the Comanches.

Both the Old World and the New benefitted from Christopher Columbus explorations. We benefit to this day because of he and his crews. That should be celebrated, not erased.

Feature Photo Credit: 2005 photo of Columbus Statue in Baltimore, destroyed in 2020, by Brent Moore via Flickr, cropped and modified