Previous post
Biden Lawyers And FBI Are Covering For Him 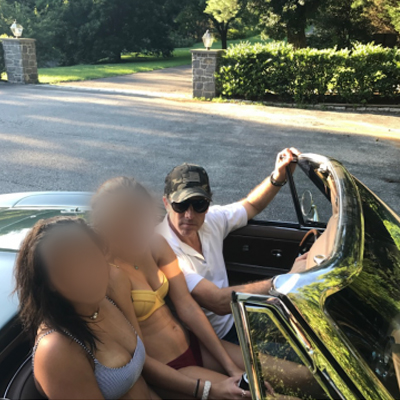 Remember when Joe Biden defended placing those classified documents next to his ‘Vette? It was all good because he didn’t keep that car on the street. It was in a locked garage, he said, and everyone knows a locked garage is like a fortress, right?

But on Wednesday evening, the Washington Free Beacon released four photos which show Hunter Biden at the wheel of the Corvette in 2017. There are two unidentified girls sitting next to him; one is believed to be his niece, 12-year-old Natalie Biden. The other girl is unknown. Hunter is wearing a ball cap and a white polo shirt.

How do we know that the photos aren’t fake? First of all, they came from Hunter’s laptop, which the media have begrudgingly admitted is genuine. Secondly, the photos have GPS Metadata attached to them, showing the time and date (July 30, 2017), along with an address which places it in front of Joe Biden’s home in Delaware.

Plus, Konstantinos Gus Dimitrelos, who is a former secret service agent as well as a cyber forensics expert, pronounced the photos as bona fide:

Apparently Hunter Biden felt entitled to drive his dad’s Corvette. After all, according to Joe, Hunter and his late brother Beau had the car’s engine rebuilt as a Christmas gift.

But it gets worse. Miranda Devine of the New York Post, who broke the laptop story in 2020, also found that in 2018 Hunter Biden claimed that he owned the house where Joe stored the classified documents. He also lived at the property.

In 2018 Hunter Biden claimed he owned the house where Joe Biden kept classified documents alongside his Corvette in the garage Via @jj_talking pic.twitter.com/L7c80MRRiS

Not only that, but at the time the photos were taken, Hunter Biden was negotiating a sweet business deal with the Chinese energy conglomerate CEFC, which is now defunct. And, in 2017 and 2018, CEFC paid Hunter CEFC $6 million in consulting and legal fees. All while Hunter had access to the garage and its secret classified documents.

Jonathan Tobin, writing at Newsweek, says that investigating Hunter should be a priority:

“If Congress is ever to make a serious attempt to reform the Washington swamp, in which members of both parties’ establishments abuse the public trust, there will never be a better platform for doing so than the one provided by the president’s prodigal son.”

Funny Biden Business at U of Pennsylvania

Joe Biden has a think tank at the University of Pennsylvania, called the “Penn Biden Center.” And on the same day they broke the story of Hunter Biden driving his dad’s Corvette, the Free Beacon discovered some monkey business at the U of Pennsylvania.

The WFB reported that since Joe Biden became president in 2021, anonymous Chinese donors have been pouring millions into the think tank. According to Department of Education records, U of Penn has received $14 million from unnamed contributors in China and Hong Kong, as well as $2.4 million from anonymous donors in Saudi Arabia. That’s in addition to the $61 million the school had received from Chinese donors between 2017 and 2020.

Why are these donors anonymous? And why is the Biden administration Department of Education keeping these names hush-hush? Previous administrations would publish these names in an online database. Plus, American universities which receive federal grant money are supposed to disclose foreign donations to the government.

A government watchdog group called the National Legal and Policy Center (NLPC) wonders if any of this money went into the Penn Biden Center, too. Tom Anderson of the NLPC told the Free Beacon:

“The Department of Education’s policy of hiding the identities of foreign entities showering our universities with billions of dollars is promoting a toxic brew of dark money and corruption.”

Joe and Hunter Biden Aren’t the Only Sketchy Bidens

Joe Biden’s brothers Frank and James also have dirty hands. And believe or not, at the same time the Free Beacon was reporting on Hunter’s access to Joe’s Corvette, CNN — yes, that CNN — was reporting on the duplicity of these two trading in on Joe’s name.

Now CNN called out Joe Biden’s brothers for corrupt dealings. What the heck is going on? They gotta be hacked. pic.twitter.com/5snKf4XOCD

Who would’ve ever guessed that CNN would report anything deleterious to the Biden family. Perhaps it’s as Robby Starbuck tweeted:

“It’s getting to be pretty clear that the left wing establishment has decided to move on from Joe in 2024. CNN didn’t just suddenly discover journalism again. This is all about selecting a new, shiny, further left candidate for 2024. Joe is done.”

Maybe, maybe not. However, it’s becoming more clear that with each drip-drip of “Scranton Joe’s” haphazard handling of classified documents, and with each Hunter Biden story emerging, the current administration is becoming toxic. Joe Biden is fond of saying, “I give you my word as a Biden.” It appears now that the name of Biden — be it attached to Hunter, Joe, Frank, or James — isn’t worth a bucket of warm spit.