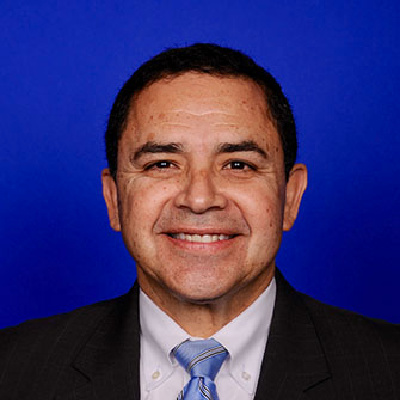 Democrat Representative Henry Cuellar, of Texas, released photos of illegal immigrant children held at the border to Axios.com. Why would Cuellar breach the Biden/Pelosi narrative of this is a “challenge” not a crisis? Maybe because he sees the disaster. Or, maybe because he wants to keep his cushy job.

Before we take a peak at the photos that he gave to Axios, we must note that Henry Cuellar has always been consistent in his position on the border. He represents the 28th district in Texas which runs from San Antonio down to the Rio Grand River. San Antonio isn’t “Keep Austin Weird”.

Joe Biden invited the illegals in to the country during the campaign, and two days after Biden was selected, caravans of migrants began forming in Honduras. Biden signing the Executive Order crashing Donald Trump’s hard won “Remain in Mexico” policy, rolled out the Welcome mat.

Press Secretary Jen Psaki, aka Circle Back Girl, promised “truth and transparency” in her first presser, but since January 20, 2021, she has done nothing but dissemble and obfuscate. Four days ago, when asked about the migrant facilities and press access, Psaki circled back:

One reporter noted that it’s been three weeks since Psaki was first asked about access for journalists inside facilities: “Why are we still not seeing any images inside these facilities?”

“The DHS oversees the Border Patrol facilities, and we want to work with them to ensure we can do respecting the privacy and obviously the health protocols required by COVID,” the press secretary said.

The reporter noted that the administration has not yet released photos either.

“Again we remain committed to sharing with all of you data on the number of kids crossing the border, the steps we’re taking, the work we’re doing to open up facilities, our own bar we’re setting for ourselves, improving the and expediting the timeline and the treatment of these children,” Psaki said. “And we remain committed to transparency. I don’t have an update for you on the timeline for access, but it’s certainly something we support.”

Oh how kind of her to support Freedom of the Press. The group of nimrods installed in the White House are clueless. They gave Henry Cuellar no choice but to release photos, which he did not take himself, of the pod kids to the media. 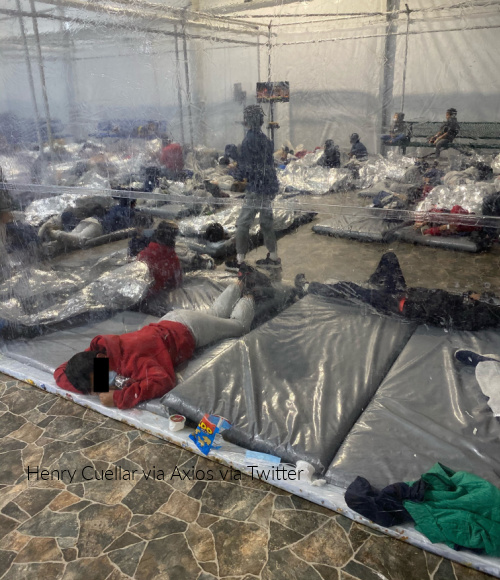 Glad those kids aren’t in cages anymore. Per Axios:

Each of eight “pods” in the so-called soft-sided facility has a 260-person occupancy, said Rep. Henry Cuellar (D-Texas), who provided the photos to Axios to raise awareness about the situation. But as of Sunday, he said, one pod held more than 400 unaccompanied male minors.

Cuellar described the setting as “terrible conditions for the children” and said they need to be moved more rapidly into the care of the Department of Health and Human Services.

Look, I am a cold-hearted chump, and I have very little sympathy for these “minors. After a harrowing journey across the Darien Gap through Central America, these kids are out of the elements and have delicious salted snacks. If you go to the Axios article and look at the four pictures, at least one of them looks like a typical American high school at morning break. Yes, the facilities are overcrowded, but whose fault is that, Joe Biden?

Did the Biden folks rip these “children” from their parents’ arms, as they accused the Trump people of doing? Did the parents pay coyotes to deliver these kids to the border? There are nearly 16,000 migrants at the border who need to be fed, clothed, given health check up and vetted. In the following video a mother says that she just wants the best for her children:

And, the owner of the migrant facility who says this is the fault of mean, old Trump and his requirement that migrants apply to enter the country. I have a few choice words for that old fart, but I will refrain.

The Biden people not only opened the temporary facility in Donna, Texas, but they have 1,500 minors in the Kay Bailey Hutchison Convention Center in Dallas. Today, the city and county of San Diego announced that they will take migrant minors:

The San Diego Convention Center will soon be used to house unaccompanied migrant children, the city and county have announced https://t.co/3aejJNTmrk

This is not compassion for anyone. I am guessing these kids are not carrying identification, birth certificates or school records. Do we know if they are really minors? Or, if they are minors, are they members of a gang. Who remembers the MS-13 infestation we had on Long Island ten years ago? You can read a refresher here.

If these minors are minors and they don’t have family to take them in, what is to become of them. Will they go into the already overwhelmed foster care system? What about the local school systems?

There is one more thing, I’d like to mention. The Biden people have issued a contract to pay border hotels $86,000,000.00 for hotel rooms for the next six months for 1200 illegal immigrants. I could be way off here, but that works out to about $315.00 per night.

How many of you can afford $315.00 a night for a hotel? Or, if you can, would you? All while we have veterans, who have honorably served their country, homeless.

Kids in pods and illegal immigrants in hotels. I know I didn’t mention the drugs and drug cartels or the human traffickers. We will get to that. It’s only going to get worse.

Trump was a meanie for putting kids in cages that Barack and Joe built. Now, thanks to the installation of Joe Biden we have a real humanitarian crisis. Well done.