Next post
Ways to Prevent Rape: A Few Global Ideas

Like many vendors, NARAL, one of the sponsors of the bat sh*t crazy Netroots Conference this year in San Jose, provided take-away candy at their exhibit booth. But it wasn’t just any candy. No. It was M&M-like candies that said “pro-choice”.

Why? Because abortion is now as easy as eating candy, kids. 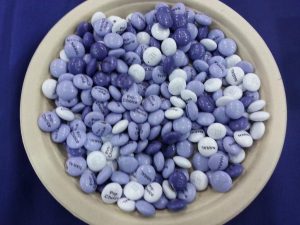 And just so you know, this isn’t the first time the ghouls have used candy to promote abortion. They gave out chocolate at Christmas.

The Other McCain has up a bunch of great blog posts including this one by Stacy on “Crony Journalism at Think Progress?”

ST at Sister Toldjah has up a post on “Paula Deen out at Food Network – yet serial racist Al Sharpton still has his MSNBC gig.”

Professor Jacobson at Legal Insurrection has up a great post today on “Loophole in Gang of 8 bill gives Napolitano wide discretion to allow almost anyone to stay in U.S.”

Jeff at Gay Patriot has up a really interesting blog post on “Today’s history lesson: Eighty years ago…”.

Glenn Reynolds or Instapundit has many great posts at his blog hub from all over the blogosphere so go check them out!

Emily at NakedDC has a blog post up on “New Yorkers paying to host Mayor Bloomberg’s anti-gun campaign site?” Go check it out.

Deebow over at Blackfive has up a terrific post “I Guess If General Dempsey Says So…” It’s a must read.

Jammie at Jammie Wearing Fools has up a great post on “Hopelessly Naive: Delusional Obama Says ‘Iranian people rebuffed the hardliners and the clerics'”.

This Ain’t Hell has a bunch of great posts up today but I especially like this one by Jonn called “Glen Coffee from the NFL to Fryar Drop Zone.” It’s inspiring!

American Power also has up this blog post on “Netroots Exploits Emerging Technologies to Block the ‘Corporate-Funded, Right-Wing Assault’ on Americans.”

Dan Riehl has a blog post up at Riehl World View on “Secret Service “Visits” Outspoken Twitter Critic of Obama?”

Ed has a blog post up at Hot Air on “Fox: Kennedy signed off on Benghazi post despite substandard security.” Go read it!

and finally, Ace at AoSHQ has up a blog post “Stunner: Hillary Clinton Thinks It Would Be Pretty Neat If We Elected a Woman President Real Soon.” As always, read the comments, they’re GOLD.