Next post
Hunter Biden: Just A Guy Who Loves To Paint 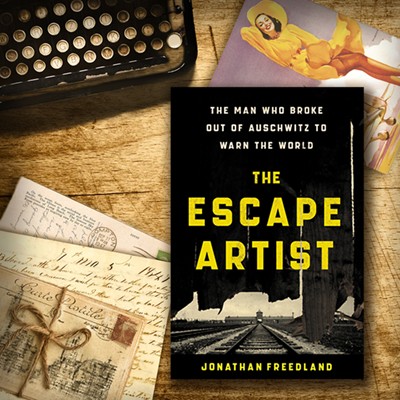 Did you know that people managed to escape Auschwitz? I had, but didn’t know the story until I read this book, “The Escape Artist.” In a time like today when the words Nazi and Hitler are thrown around like confetti, or people are censored off of social media and banned from school board meetings for going against the narrative, this story is a tough read and a MUST read.

Rudolf Vrba or Walter Rosenberg as he was originally known, was only nineteen years old when he and Fred Wetzler managed to escape from Auschwitz and make their way into Hungary to not only warn the Jews there, but to tell the world the story of horror and death that the Nazis were so carefully hiding from the world.

Down is up and Up is down was how the Nazi regime operated. And so, this is not only a true story about perseverance and courage, it is a story about how a life can be changed.

Walter Rosenberg was a young teenager when Hitler started changing the world for the worst. Rosenberg, a native of Slovakia, was in school learning multiple languages including High German along with math and science courses when the government went fully Nazi. Which meant, as it was in Poland and Germany that Jews were consistently labeled as untrustworthy, unreliable, and to blame for everything wrong in a country of nearly three million. The Jewish population at the time? 89,000. That’s correct. Everything that went wrong in Slovakia was blamed on a tiny fragment of the population. Sound familiar? It should as we’ve all watched similar things unfold over the last few years.

The Nazi regime started a barrage of disinformation specifically targeting the Jewish population. As noted above, up was down and down was up according to the Nazi government.

Soon however, it wasn’t enough to gaslight the Jewish population into giving up everything, be kicked out of schools and universities, or fired from their jobs. Nope, the Nazis realized that they could turn the Jews into slave labor while trying to take over the world. Free labor while stealing from the Jews was just the start of their horrific experiment, and Walter Rosenberg was caught up in it.

By the time he entered Auschwitz, (which started with a Jewish prisoner population of 100,000 men and 50,000 women) the Nazis had switched from slave labor to devising their Final Solution – Holocaust.

Walter, after being at Auschwitz for several months and enduring great brutality, realized the horror that had been in front of him all along. Because of the various jobs he was “given” that young man had seen the majority of the camp. One day, the veil ripped away and he realized that many more men, women, and children were being murdered in the gas chambers than were slave laborers in the camp. He realized that when tasked with mining peoples clothes, suitcases, and toiletries for money, gold, and jewels.

Once he realized the true extent of the horror, Walter embarked upon two missions.

One: Memorize, repeat, and memorize EVERYTHING he saw. Being a naturally data-driven person with an exceptional memory, Walter was able to memorize not only the camp layout but how many poor souls came through the camp, hundreds of thousands, who never left. In the book (via Apple Books) pages 439-446 discuss how big a business/money maker this was for the Nazis.

Two: Walter became determined to escape. Once he truly realized the evil that was Auschwitz, he began working on a way to escape. The world needed to know.

Walter Rosenberg and Fred Wetzler spent three days under a wood pile IN THE MIDDLE OF AUSCHWITZ until the search for the missing prisoners was called off. They then made their way through the camp and beyond. They managed to make their way, unaided, across one country and into Hungary.

At that time, they both knew Hungarian Jews needed to be warned because Hitler was going after them next.

Here’s where the book got my blood pressure up. Walter and Fred told their story. It was nearly 40 pages long and included maps (which are in the front of the book). Some people believed it. But many just passed it along. For well over SEVEN months government officials in Hungary, France, Israel, England, and the United States passed this story around and refused to take action. Infuriatingly, many of those same officials already KNEW that Hitler had concentration camps all throughout Germany, Poland, and beyond. Yet armed with these facts, they still sat on their hands and did NOTHING. Once again, does that sound familiar?

What stayed with me the most through this book is the denial rampant among not only the Jewish population but the world at large. The Nazis were able to enact the Holocaust and hid it in plain sight.

Instead of calling out the truth, denial of the uncomfortable truth and facts became a way of life, even for many who entered the camp. “Denial was the most natural escape.”

As is noted throughout the book, and especially at the end, it is incredibly difficult to conceive of or acknowledge that such evil can exist, EVEN WHEN one is right in the middle of it.

That is why it is so imperative that these true accounts are read, remembered, and honored. I urge you to read “The Escape Artist” and look at it not only through the lens of history, but apply its lessons to today.