Next post
Air Marshals To Babysit At The Border 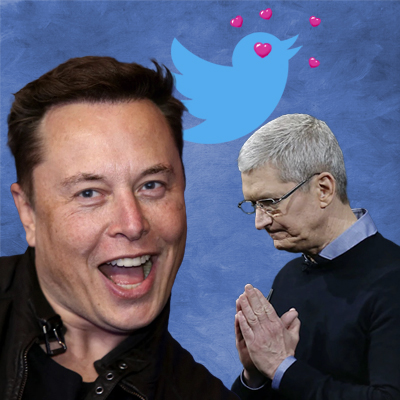 Apple’s Tim Cook wasn’t thrilled that Elon Musk had bought Twitter to turn it into a free speech zone. So Musk alleged that the tech behemoth had not only “mostly stopped advertising on Twitter,” but was looking to pull it off its app store.

“Apple has mostly stopped advertising on Twitter. Do they hate free speech in America?”

He followed it up with this:

“Apple has also threatened to withhold Twitter from its App Store, but won’t tell us why.”

Of course Musk was trolling Tim Cook. We know why Cook was threatening Twitter — he’s a denizen of the Left, and the Left can’t tolerate free speech on one of its favorite platforms. Remember how Apple, along with Amazon and Google, put the kibosh on Parler? 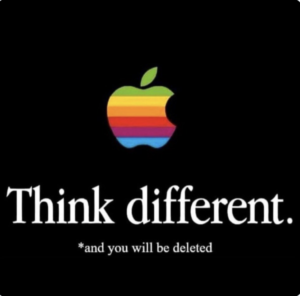 However, on Wednesday, Musk tweeted a short video of a visit to Apple headquarters, thanking Cook for the tour around HQ. That is, “Apple’s beautiful HQ,” as Musk put it.

Thanks @tim_cook for taking me around Apple’s beautiful HQ pic.twitter.com/xjo4g306gR

A few hours later, Musk followed that tweet with this one:

“Good conversation. Among other things, we resolved the misunderstanding about Twitter potentially being removed from the App Store. Tim was clear that Apple never considered doing so.”

Wouldn’t you like to have been a fly on the wall during that powwow? So we’re to believe that Tim Cook went from “Nice social media platform ya got there — be a shame if somethin’ was to happen to it” to “Remove Twitter? Oh, perish the thought!”

It wouldn’t be that Elon Musk threatened to create his own smartphone, would it?

Conservative podcaster Liz Wheeler made that suggestion to Musk, telling him that “half the country would happily ditch the biased, snooping iPhone & Android.” Musk answered that he would do so as a last resort:

“I certainly hope it does not come to that, but, yes, if there is no other choice, I will make an alternative phone.”

I certainly hope it does not come to that, but, yes, if there is no other choice, I will make an alternative phone

Christina Pushaw, rapid response director for Gov. Ron DeSantis, liked the idea of a “Tesla phone” if it improved privacy. She tweeted:

“I think we need more options than just iPhone and Android. Just hope that the Tesla phone or whatever he comes up with will be better for privacy than Apple/Android.”

Perhaps Tim Cook decided it’d be better not to tussle with the rocket-building guy who has more F-You money than anyone.

But that’s not all. Tim Cook doesn’t want criticism about censoring Twitter at the same time Apple is helping China censor its protestors.

Those of us who use Apple products are familiar with “AirDrop,” Apple’s file-sharing feature which works only between phones, computers, and other devices. The user doesn’t need the internet to communicate, and thus AirDrop has become a valuable tool for protests, not only in China, but in other countries as well. Users merely opt-in between each other.

But on November 9, Apple released its new iOS 16.1.1 for mobile users worldwide. The company simply said that “This update includes bug fixes and security updates and is recommended for all users.”

There was, however, one little detail that Apple didn’t divulge for users in China: AirDrop can be set for “everyone” to access for only 10 minutes. Then it switches off. And this only happens in China.

Apple has released a software update limiting the use of AirDrop in China in light of recent protests.

AirDrop was being used by protesters to transmit info directly phone to phone, bypassing the Great Firewall of China. pic.twitter.com/2UNtOeuTBZ

Plus, this little bug made its appearance right after Xi Jinping assumed his third term as China’s president, and protests broke out over that.

Correlation doesn’t mean causation, of course, but the timing is … shall we say … suspicious?

It’s not the first time that Apple has thrown China protestors to the wolves, either. In 2019, the company removed apps that allowed Hong Kong protesters the ability to track police movements and street closures. China Daily, the mouthpiece for the CCP, accused Apple of “mixing business with politics, and even illegal acts. Apple has to think about the consequences of its unwise and reckless decision.” Tim Cook and Apple obediently grabbed their ankles for the ChiComs.

Despite the naysayers, Twitter has been rapidly growing in the United States since Elon Musk took over. Two independent research firms — Apptopia and Sensor Tower — report that compared to last year, downloads and activity on Twitter have increased over the past few weeks under the new ownership.

And increase it has. Apptopia found that over a 31-day period, downloads were up 23% over the previous month, and 42% over a similar period last year. Sensor Tower found that installations of the Twitter app rose 16% during Musk’s first month, along with a rise in activity.

Meanwhile, Sen. Elizabeth Warren told a reporter on Wednesday that “One human being should not be able to go into a dark room by himself and decide ‘Oh, that person gets heard from, that person doesn’t.’ That’s not how it should work.” Which is funny, because that’s exactly what she and her fellow progressives want to do.

So here’s what Elon Musk has done since purchasing Twitter: made Tim Cook back off from his threats, successfully trolled the Left, and grew Twitter under their noses. Well-played, Elon. Well-played.