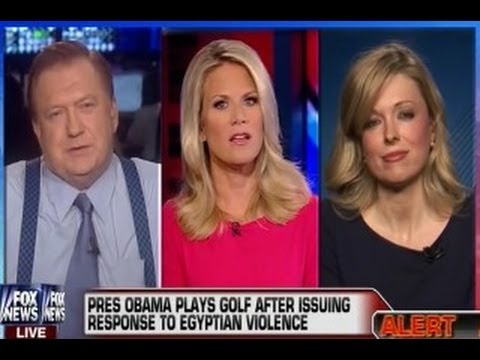 A wave of devastating destruction and unspeakable violence is yet again sweeping across Egypt, with shockingly sustained attacks on Christians by the Muslim Brotherhood and their political allies. Yet in the middle of all this chaos, some moron liberals would suggest we shouldn’t be too hard on Obama for playing golf while Egypt spirals into civil war, in part because of Obama’s own feckless pro-Islamist foreign policy. Why shouldn’t we expect more from Obama on the Egypt chaos? Because, well, he’s on “vacation”.

You can watch said moron liberal below.


Others suggest he’s just working on his golf swing.


So there you go… even though that video is from 2009, it’s proof that Obama, regardless of what world crisis is happening at the moment, has had need of lots and lots of golf time.

And the mess in Egypt? Well, first off, eff the “Arab Spring” ok? And it’s no longer “unrest” is it? It’s clearly a war there and evidence of what happens when you don’t destroy your enemy. It seems virtually impossible at this moment that an effective rule of law and order can be re-established across the country for the benefit of all Egyptian citizens without an even bloodier response by the Egyptian military — which I suspect is coming. The Muslim Brotherhood terrorists need to be utterly crushed though, that’s for sure. And Obama, along with the religion of peace, can kiss my Baptist irish arse.

Teach at Pirate’s Cove is blogging about “NY Times Notices That Navigators Are Super Necessary For Obamacare.”

The Other McCain has many good blog posts up including this one by Stacy on “Kaitlyn Hunt: Obsessed Lesbian Predator?” Make sure you check out the comments.

Phineas at Sister Toldjah has up a post on “#ObamacareIsWorking, my first Storify.”

Mandy Nagy at Legal Insurrection has up a great post today on “Arrest of al-Zawahiri’s brother as crackdown on Muslim Brotherhood continues in Egypt.”

Kurt at Gay Patriot has up an interesting blog post on “What ARE the aims of Obama’s foreign policy?”

Emily at NakedDC has a blog post up on “Ladies, prepare for TSA Operation Boob Squeeze.” Great.

Dana at The First Street Journal has up a great post called “Rule 5 Blogging: I have to work on Saturday (again) edition.” 🙂

Matt over at Blackfive has up a great post about the most fun you can have fully clothed. Go look. 🙂

Max at MaxRedline has up a great post called “That Horrible Coal? Yeah, About That…”

Jammie at Jammie Wearing Fools has up a post on “Queen Hillary? Political rent-seeking and her expected coronation.”

This Ain’t Hell has a few good posts up today including this one by Jonn on “Iraq wants US assistance now.” Make sure you read the comments – good stuff!

As always, Michelle Obama’s Mirror has up a fun blog post called “Who Are You Going to Believe, Me or Your Lion Eyes?” 🙂

American Power also has up this blog post on “Nasrallah Warns of Hezbollah Intervention in Syria.” Make sure you watch the video.

Evil Blogger Lady has up a blog post called “A-Rat: Did Alex Rodriquez turn in other players in the doping scandal?”

and finally, Ace at AoSHQ has this post up “Eff It All Friday Open Thread.” It’s definitely worth a read.