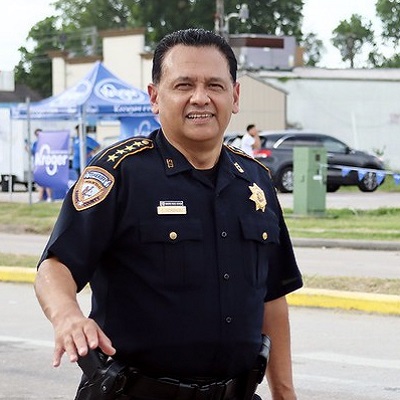 In a series of tweets Monday, Harris County Texas Sheriff, Ed Gonzalez withdrew his nomination to head Immigration and Customs Enforcement (ICE): saving us all the pearl-clutching of another Biden nominee holding office.

1/5 On Sunday, I informed President Biden’s administration that I am respectfully withdrawing from consideration for the post of Director of US Immigration and Customs Enforcement.

He could have stopped there and linked to a website with a full press release. Nope.

2/5 More than a year has passed since the President nominated me for this important position, which has not had a Senate-confirmed director since the Obama administration.

3/5 I arrived at this decision after prayerfully considering what’s best for our nation, my family, and the people of Harris County who elected me to serve a second term as Sheriff.

Again, great press release material. He should have stopped there, no such luck.

4/5 I am grateful to President Biden for the honor of nominating me, and I wish this administration well as it strives to overcome the paralyzing political gridlock that threatens far more than our nation’s border. Frankly, the dysfunction threatens America’s heart and soul.

More whining about division and gridlock. Understood. Great place to rant is Twitter. He concludes with,

5/5 My love for America and my desire to serve during these contentious times is stronger than ever. Ensuring the safety and security of the people of Harris County is a great honor, and I am fully devoted to continuing to fulfill this responsibility.

Since I’ve reached my editorial limit of allowable tweets in a piece, let’s unpack this Twitter rant nomination withdrawal.

Ed’s directs his first complaint to the slow-moving Senate. Think about all the things the Senate has been busy doing for the last year. Let’s start with confirming a Socialist to the Supreme Court, passing gun control packages to please Hollywood-elites, deciding the COVID emergency is over; let’s not forget the biggie—passing a $1.5 trillion omnibus including billions for Ukraine. The Senate has been busy screwing around with other things, sorry Ed, your confirmation didn’t get off the back burner.

Enough about the Senate. Let’s talk about Ed. His withdrawal saved us all another Brandon administration headache. Why anyone would want that job in the current hot mess of the Biden administration is a question for another day.

What other favors did Ed do for us by withdrawing his nomination? The withdrawal prevented a waffling, Federally inexperienced law enforcement guy from being in charge of ICE, buying more time for the Senate to flip in November. Oh and he also has allegations of abuse from years ago out there somewhere.

First, the abuse allegations. From a Houston news source, in March.

Nothing has been substantiated since those claims from who-knows came in March. Am I so politically jaded that I am thinking the allegations are an attempt to muddy his nomination? Yes. Why? Because no one has brought the proof since the March blip on the news feeds.

Moving on, his policies as Harris County, TX sheriff might seem like a good fit except he’s against enforcing the law when it comes to illegal immigrants.

“Just one month into office as Harris County sheriff, Gonzalez ended the county’s nine-year 287(g) partnership with ICE, which provided for the safe removal of criminal aliens from communities…He was a strong opponent of SB4, which banned sanctuary cities in Texas and required local officials to cooperate with federal immigration authorities. Gonzalez wrote op-eds in opposition; one can only imagine his policies on the ground.”

Ahhh…now we know why Biden nominated him.

Moreover, he dithers about what he truly believes the job of ICE director requires. During his Senate hearings last July, he tried to please everyone and pleased no one.

While criticizing former President Trump’s border policies, he called for rule of law. He tried to placate the side who want the border secured and current Federal law regarding the border to be enforced.

“’We can be firm on crimes, we can be firm on enforcement, but we don’t have to lose our compassion and humanity as well,’ Gonzalez said at one point during the hearing.”

Next he tried to play nice with the liberals who just want open borders coupled with lawlessness by rescinding 287G—local jurisdictions shan’t collaborate with ICE.

“The American Civil Liberties Union slammed Gonzalez’s performance in a statement following the hearing, calling his remarks ‘deeply disappointing’ and pointing specifically to his unwillingness to end the 287(g) program.”

Ed’s inability to find a political tent to shelter under is arguably the reason his confirmation fizzled. He got one thing right in his tirade of tweets—the nation is under paralyzing political gridlock. In this case, it bought time to find another nominee, and not one Senator had to take a vote. Welcome to politics.

Speaking of time, mid-terms are coming up. Joe Biden has about five months to cram through another nominee for Director of ICE, although an argument can be made that it is failing just fine on its own. The acronym for ICE stands for Immigration and Customs Enforcement after all.

Realizing the ebb and flow of political calendars, no one in DC wants to take a controversial vote to save their election skin right now.

Mitch McConnell gave us all a bright bulb to consider within hours of Sheriff Gonzalez’s Twitter screed,

“Senate Minority Leader Mitch McConnell put the White House on notice Monday that he will be ‘picky’ about confirming President Biden’s nominees if Republicans regain control of Congress in this fall’s midterm elections…’If I’m the majority leader, we’ll be really picky on appointees… They’re not all as important as the Supreme Court but many of them are quite important and have to be confirmed by the Senate,’ McConnell [said Monday]…’We’re in the personnel business, the House is not,’ he said. We’ll be way more picky over who gets to head various boards and commissions and agencies that are important to how all of you function in our society,’ the Kentucky Republican said.”

November elections control everything happening in Washington D.C. right now. Including the confirmation of a sheriff from Houston.