Next post
Ed Gonzalez Does Everyone A Favor; Withdraws ICE Director Nomination 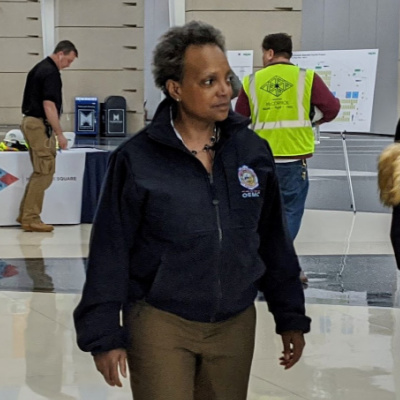 So sorry about the featured image at the top of this post. It was the best photo I could find of Mayor Lori Lightfoot. The female is not in any way photogenic. The Chicago Mayor is not only unphotogenic, she is a foul-mouthed racist with no respect for citizens, journalists or officials in Chicago or anywhere else in the United States. It’s not surprising that she said, “F*ck Clarence Thomas.” It’s just sad. If she had the intellectual capacity of a blue-tailed skink, she would be worried about the fact that her city that is en fuego.

From the Chicago Sun Times, here are the salient facts:

“If you read Clarence Thomas’ concurrence,” a fired-up Lightfoot shouts from the stage at a weekend Pride in the Park event at Grant Park.

Someone from the audience yells back at the mayor and Lightfoot says, “Thank you. F- – – Clarence Thomas.”

Some in the audience appeared shocked by the mayor’s use of vulgarity in public. Others seemed delighted and repeated it.

Lightfoot appeared undaunted as she continued her attack on Thomas. “He thinks that we are going to stand idly by while they take our rights,” the mayor said.

Lightfoot went expletive on Thomas because he listed the Obergefell (the right to gay marriage) as one of the decisions that might need to be revisited because of the construct under which they were decided:

In his concurring opinion, Thomas indicated that Friday’s decision should also be applied to other cases regarding gay marriage and access to birth control, since they were also decided on the legal theory of “substantive due process” — which refers to fundamental rights not explicitly established in the Constitution.

“In future cases, we should reconsider all of this Court’s substantive due process precedents, including Griswold, Lawrence, and Obergefell,” Thomas wrote.

In the 1965 ruling in Griswold v. Connecticut, the Supreme Court allowed married couples to access birth control. In 2003, in Lawrence v. Texas, the court forbade states from outlawing consensual gay sex, and in 2015, Obergefell v. Hodges establishe a constitutional right to same-sex marriage.

Mayor Lightfoot needs to grab a bar of soap for her mouth and try to think with her smaller than a skink’s brain. If the cases were decided on “substantive due process” and are on weak legal grounds, they may need to be placed on firmer Constitutional grounds. Plus, Alito said in his opinion that the Dobbs case overturning Roe v. Wade did not reflect on any other case. Gay marriage is here to stay. It’s not comparable to Roe because neither one of the participants dies in the process of the wedding.

Lightfoot is Mayor of a city in extremis. Last week, billionaire Ken Griffin announced that he was relocating his Citadel hedge fund and trading platform from Chi-town to Miami, Florida because of crime:

Mr. Griffin has been threatening to move Citadel’s headquarters for years, citing concerns over local crime. At a recent DealBook conference, he recounted the story of a Citadel partner’s being accosted outside his home with a gun to his head. He said that when he brought up the issue to Governor Pritzker, “he took the moment to call me a liar.”

Speaking of crime, Lightfoot was at first all in on the “defund the police” movement. She backed off, but still cut the police budget. Last summer, when Officer Ella French was murdered in the line of duty, the Mayor tried to make nice with the police, but they weren’t having it:

Children die from violence nearly every weekend in Chicago. This past weekend while Lightfoot was cursing Justice Thomas, a five month old baby in her car seat in the backseat of an automobile on the streets of Chicago was killed in illegal gun violence. On Friday, the youngest brother of Fox News fav Gianno Caldwell was murdered:

Yesterday was the worst day of my existence. I received a call informing me that my teenage baby brother was murdered on the south side of Chicago. Never could I have imagined my baby brother’s life would be stolen from him 😭. Please keep my family in your prayers. pic.twitter.com/vtbU7qzcUa

Mayor Lori Lightfoot is useless, at least the skinks in my garden eat spiders and beetles. Lightfoot leaves her city to burn while she pitches a rusty and slurs Clarence Thomas. She couldn’t iron his robe.