Next post
Harris Adopts The "America Was Never Great" Strategy 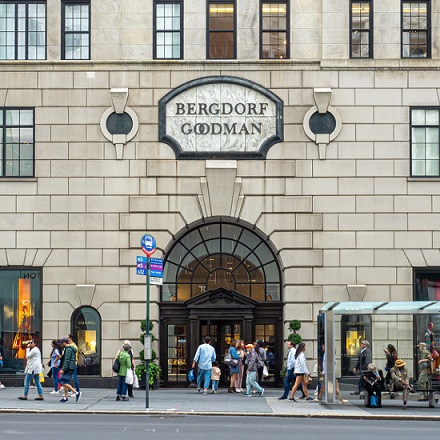 by Elizabeth Nickson in Headlines 12 Comments

One has to feel sorry for E. Jean Carroll, shot for the cover of New York Magazine in her mid-70’s, in an attitude of hollow-eyed raddled misery, wearing a coat dress that has seen better decades.

Her mood resembles an African who has watched her entire village raped then killed, rather than a famous writer who has lived her entire life sipping on cocaine and Moet Chandon and having zipless encounters with horrible men like Donald Trump.

In next week's cover story, E. Jean Carroll shares for the first time her violent encounter with Donald Trump. The coatdress she was wearing that day has hung in her closet ever since; she wore it again for the first time for her portrait with New York https://t.co/yPaLsRoVcH pic.twitter.com/Tx2HAzt1mi

These days, it is as if an entire segment of Boomer women are willing to throw themselves on the bonfire in order to rid the universe of Orange Man.  No humiliation is too great, no skeezy tale too skeezy, no horror dredged out of your past and retailed to many millions of strangers too horrible if it serves the goal of goals.  E. Jean, like that pitiable creature Christine Blasey Ford, regrets that she has only one life to give for her country.

Let’s assume that every detail of E. Jean’s recounting of her “rape” by Donald Trump is true, which I don’t for a minute, but, as an exercise.

Her encounter began with her reversing course and coming back into the store to spend time with him.  There is witty banter.  Then she heads for the lingerie department with him. More witty banter.  They choose a lace body-stocking.  Teasing about who is going to try it on. Then with DJT following along, she proceeds to the dressing rooms.  No saleswoman in sight (often the case on the second floor when I visited BG, by the way) they excitedly try one dressing room door after another.  They find one unlocked and enter.  By this time DJT is no doubt panting like a dog, thinking he was about to experience that sought-after grail of the late 20th century, the zipless fuck, they shut the door. And then she’s OH SO SURPRISED that he thinks she wanted sex.

Pull the other one lady. You did everything but undress in the lingerie department.  You were enticing this guy, setting him up, no doubt with an ulterior motive, maybe to dine out on, maybe using him as a potential subject for a column or magazine piece.  Do you really think for a second that he didn’t see your performance as an invitation?  Plus DJT at that time was a babe, especially for his age.  He was a 6’4” pretty boy who basically owned New York.  Of course, he thought you wanted him.

For context, picture New York in the 80’s and 90’s.  It was a seething cauldron of sexual activity.  For the first time in the entire history of the human race, all the rules had been thrown over.  Women were said to want raw sex just as badly as men.  Everyone was young, everyone was randy.  We were playing in the most permissive culture on God’s green earth. Studio 54 had set the tone and from Wall Street to the Bronx, everyone spent five nights a week partying. It was all rutting all the time.  Career women typically, and I mean, typically, used their sexuality to get ahead, to get a job, to get a promotion, a raise, whatever.  I was married with Doberman in New York at the time, and therefore more or less protected, but one Saturday a friend working at 20/20 took me out to lunch with a group of very very successful career women. They were TV executive producers, PR mavens, executives at American Express, etc, making six figures when that was virtually unheard of. These gals were the most vulgar, sexual, crudest women I had ever met. Not one of them was faithful to their husbands or boyfriends, they all had sex with people on business trips, they all had used their sexuality to get ahead, and loved retailing both adventure and payoffs.  I got drunker than I thought possible and stumbled home thinking if this was my future, I did not want it.

E. Jean was a tall gorgeous blonde for most of her adult life, yet she recounts one appalling tale after another about horrible men.  This too is hard to believe, because, in most of the accounts, she has played along right up to the point where she wasn’t having a good time. What would possess her to taunt and tease monsters? Was her crudity some kind of cry for help?  How tone deaf do you have to be? Why was she attracted to one beast after another?  As someone blisteringly successful and gorgeous, why couldn’t she find someone to love her? 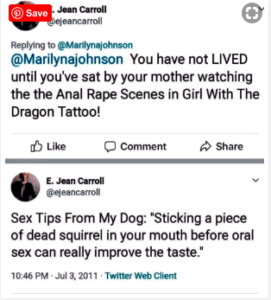 The legacy of second-wave feminism has a sour shadow side.  Fifty percent of women college graduates between 1970-74, did not have children.  In cities like New York, DC, LA, the glamorous cities, that percentage is considerably higher.  Today, many of those women live lives of quiet regret.  They regret chasing after horrible men as trophies, they regret the raw sex, they regret their abortions, and rather than experience their sorrow, they live in a stew of resentment, shame, and sorrow.  Unless they were smart and lucky, many of them live in straitened circumstances.  They did not build families, they built friendship networks, which today purvey a bitter hatred of the patriarchy, and work for the destruction of Orange Man.  They are lethal and destructive and stuck in an infantile version of their bad selves.

That generation of career women was, frankly, heroic. They were the first generation in history to invade the workforce en masse and break into professions long held entirely by men. My daughter can have an exciting difficult job with endless opportunities for advancement and still have three children, and a happy family because of them. That generation led the way, all too often giving up children and abiding love. We need to hear their stories, their losses, recounted from them as adults, not as the masquerade of hurt baby-women screaming and bleeding in the streets.