Previous post
College Loans And The People Who Won't Pay Them 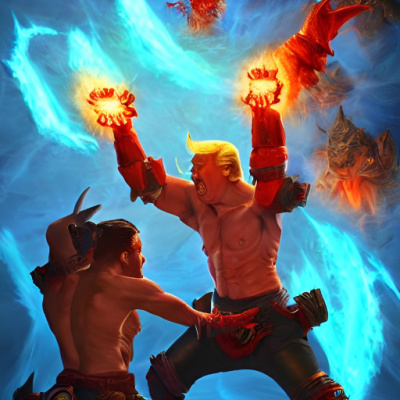 For seven years, the Deep State has thrown everything they have at Donald Trump. They impeached him twice. Ask Joe Commie on the street why DJT was impeached and Mr. Commie will snarl back that Trump should be in prison for life. That’s all they know. He has been vilified by The Left, The National Review, the Country Club Republicans, the Never Trumpers, and the Bluenose Republicans. Now, AG Merrick Garland has unleashed Jack Smith, Uber Prosecutor, on Trump under the guise of “fairness”, just two days after Trump announced his 2024 run. The Left squeals with glee and the Deep State makes like the Wicked Witch of the West, “I’ve got you, my pretty.” I am done with all of them and all of you.

Y’all frost me. Donald Trump had nothing to gain by running for President once. Could have built buildings till he turned toe up. The second run was STOLEN from him. The hacks in certain states used Covid as an excuse to institute unConstitutional voting rules, like ballot harvesting, drop boxes and universal mail-in voting. France doesn’t allow that ish and we are better than the French, right? We all know that election was a clusterf*ck and yet state legislatures did nothing to cure the rules. That gave us the 2022 midterms. Candidate quality, my Aunt Fanny. On Wednesday, Trump announced his third Presidential run and immediately the Country Club and Bluenose Republicans took to their fainting sofas.

But not the Deep State, no. AG Merrick Garland, the Shield and the Sword of the Deep State, announced a new Special Persecutor for matters pertaining to Donald Trump. Garland named this guy:

JACK SMITH-the new "special counsel" looking into Trump. I think someone should look into JACK SMITH. Who the hell is this guy? What's up with that Purple thing? He's TOO YOUNG and TOO UNKNOWN. He's gonna try to "make a name" for himself by catching a Big Fish. STAY IN SWEDEN! pic.twitter.com/QyTZXU6yVz

In the photo, Smith is shown in front of the United Nations flag and wearing his Judicial Robes from the International Court in The Hague, to which the United States is NOT a signatory. Kelly is wrong; Smith is not unknown. The Left is positively squeeing like they all just got Taylor Swift concert tickets (rather have dental surgery).

If a special counsel was to be appointed, I can think of no-one better suited than Jack Smith. Vast experience prosecuting public corruption cases, treacherous national security violations, and crimes against humanity. Absorbs complex facts instantly. Perfect for Donald Trump.

And, he went after Tea Party Patriots, too.

Here is the Vox take on the Special Persecutor announcement:

The announcement is a significant development that underscores the seriousness of the probes into Trump — one into his attempt to overturn Joe Biden’s 2020 election win, the other into his handling of classified documents.

It’s unclear whether the move will change much about those investigations, which were already proceeding pretty vigorously. That is: it’s not about appointing some new tough prosecutor to take on Trump. It’s more an attempt to assuage fears that the Justice Department’s decision-making will be driven by politics.

In the announcement, Garland referenced Trump launching his presidential campaign earlier this week as well as Biden’s own comments that he will likely run for reelection as factors influencing his decision to appoint a special counsel.

Smith is a career prosecutor who headed the Justice Department’s public integrity section before stepping down from the DOJ in 2017. After his departure, he was appointed chief prosecutor for a European Union body investigating war crimes in Kosovo and worked out of the Hague. He is still overseas and did not appear at Garland’s announcement.

Smith, a triathlete, is in the hospital after a bicycle accident. He is still in the Netherlands and Joe Biden wasn’t around. I don’t care. He looks like an MCU baddy.

I have less than zero confidence in anything the Biden Administration is involved in, as should all of you. He signed off on the Mar-a-Lago raid, which was a chicken show. The Regime and its scribes have now admitted there was nothing found untoward in the raid:

These people stated that the review did not find any business benefit from Trump’s access to classified information. They said that FBI interviews with witnesses have not revealed any attempt by Trump to sell, leverage, or use government secrets. These people stated that the former president was motivated by a basic desire to keep his property, rather than a more sinister motive.

The FBI did not find any codes for nuclear bombs, and they found no evidence that Trump wanted to “leverage or sell the government secrets.”

Trump was not selling nuclear secrets on Craigslist. Who knew? Everyone. That includes most likely the FBI and the Department of Justice.

Donald Trump knows the score on this:

Donald Trump is the most investigated man EVAH. He is a victim. I believe he is innocent. He should cooperate with nothing.

I am sick to death of all of this. Senators and Congressweenies stick one finger in the air and the other up their own backsides and do nothing. The people that Donald Trump brought along with him, pretend they never met him. And, Republican voters look to Ron DeSantis who is Jeb Bush-lite. Get ready, lovelies. It’s going to get super-ugly.