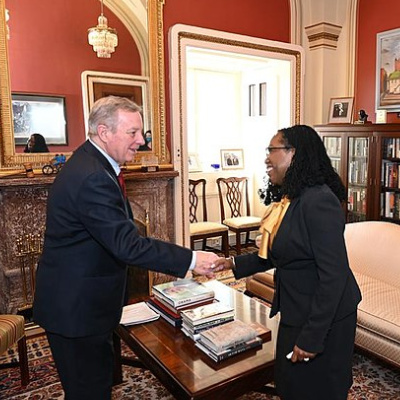 One of the things that has stood out in the Senate Hearing of SCOTUS nomineed Ketanji Brown Jackson is that notorious White man, Senator Dick Durbin, doesn’t think that the Black Judge can handle the hearings without his help and protection. Liberals always end up showing their racism. Dick steps in after every Republican questioner for “Chairman time” to clarify the Judge’s positions. He adds “context”. If Brown Jackson is a qualified jurist she doesn’t need a White man to give her context.

I kept an open mind with regards to the nomination of Ketanji Brown Jackson. Elections have consequences, even one where the rules were changed un-Constitutionally. We are living under the Biden regime. After the regime forced out Justice Steven Breyer, Biden had the right to name his Supreme Court pick. At her nomination announcement, Brown Jackson said “all the reliably correct things” as Deanna wrote. As a graduate of Harvard and Harvard Law, Judge Brown Jackson is part of the elite of the elites club that stunts the SCOTUS thinking in my mind. If the Justices really looked like America, there might be an Associate Justice who graduated from Appalachian State.

Here’s @MarshaBlackburn asking KBJ if she can define the word woman. KBJ says she can’t. This is how broken the “party of science” is. They are so obsessed with transgenderism that they can’t even say what a woman is. pic.twitter.com/zdj2OkqppI

Brown Jackson went on to say that as a judge she settles disputes. As to not being a biologist, did she not take a high school biology class where they discussed the XX chromosome? How did Brown Jackson get through English class without knowing what a woman is? As a boni fide woman said last week, I am not a veterinarian, but I know what a dog is.

Twitter has been atwitter over the questioning of Brown Jackson by Senators Tom Cotten, Ted Cruz and Lindsey Graham. Lindsey drew the ire of Joy Reid:

Someone might want to inform @LindseyGrahamSC that the job of a Supreme Court justice is to interpret the laws, not to lock up for life whoever it is that Lindsey Graham wants locked up for life. This man continues to be a parody.

Until they ask Judge Brown Jackson about her beer habit, go cry somewhere else, Joy.

But for sheer performance art, Senator Dick Durbin for the win. Dick has been using “Chairman time” to clean up after Judge Brown Jackson. Is this because the White man doesn’t think the Black woman can do it for herself. She needs the White man. For example:

Dick had to add context to the jurist’s comments about calling President G.W. Bush and SecDef Donald Rumsfeld “war criminals”. It’s just boiler plate. Sadly, when the Judge herself spoke, she didn’t help herself.

he Republicans took particular issue with how he had responded to smears of Judge Jackson’s record on child sex offender cases by Sen. Josh Hawley (R-MO) — and Durbin noted that previous Republican chairs had done exactly the same thing after Democratic comments when they controlled the majority.

“I want to lodge a protest and say I don’t think it’s appropriate for the chairman, after every time someone on this side of the aisle asks questions of the judge, you come back and denigrate and attack and criticize the line of questioning,” said Cornyn. “I think the judge is doing a pretty good job of defending her own position and answering questions.”

Dick’s “Chairman time” went on and on and on. I think Judge Ketanji Brown Jackson could have stood on her own. No one read from her high school year book or questioned the dogma of her religion.