by Ruthie Thompson in Headlines 10 Comments

Right smack in the middle of a scathing IRS scandal, desperate Democrats are calling for the big bad IRS to once again, target Conservative groups. Those speaking the loudest of course, are the vulnerable Democrats up for reelection this year. It’s bad enough that they not only voted for and supported Obamacare, but how dare Conservative groups point that out. So who do the Democrats call for help? They call for the IRS. Who better to help them out than the very agency infamous for targeting Conservative groups. Yes, they are really that desperate.

At a time when Obama claims that not a “smidgen” of corruption has occurred regarding the targeting of Tea Party and Conservative groups, those Democrats calling for help are carefully choosing their words. Of course they don’t fool us by saying that they want the IRS to be fair by targeting both Conservative and Liberal groups equally. We are fully aware of what their definition of equal is. They have continuously denied that conservatives were ever really targeted by the IRS calling the allegations paranoia or coincidental. So what a coincidence that they are calling for the IRS to help them out right before the election. They are already bruised from the havoc of Obamacare and can’t seem to find a way to pull themselves out. They can’t run from the fact that they voted for it and forced it on the American people, so now their aim is to silence the groups that wish to call them out for it. They are begging the IRS to intervene, by having a more aggressive role in regard to outside groups, that will spend millions of dollars in ads during the campaign season. They are specifically referring to 501(c) (3) and 501(c) (4) of the tax code groups that are allowed to keep their donors secret, therefore allowing them to be free of the backlash that they would otherwise get if their names were to become public. Never mind that the Democrats used outside groups to get Obama reelected. That was okay with them back then. In fact, MoveOn.org, Code Pink, the Center for American Progress and Planned Parenthood all fall into at least one of the 501(c) groups, not to mention that labor unions are also part of tax exempt status.

Are they feeling the heat? Well they should be. Conservative groups are gearing up for this year’s election. Americans For Prosperity (AFP), which is heavily funded by those evil capitalists (sarcasm),  the Koch brothers, has already spent almost 30 million dollars on ads attacking Democrats in the 2014 election cycle. They are also launching a campaign against Mary Landrieu (D-LA) for voting for Obamacare. Why is it so awful to point that out, Mary? Other vulnerable Democrats that the AFP has taken interest in include Mark Begich (D-AK), Sen. Jeanne Shaheen (D-N.H.) and Sen. Mark Pryor (D- Ark).

Regardless, how can we trust the IRS to be fair when it comes to regulating these groups? We already know that there was more than just a smidgen of corruption when it came to the targeting of Tea Party and Conservative groups already. How desperate of Dems to call for more when they are knee deep in a scandal involving this. It’s obvious that they have nowhere else to turn when it comes to running from their records. 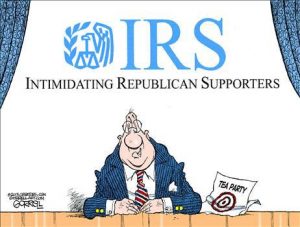