A meteor, the size of a city bus, streaked across the sky, and exploded over Russia’s Ural Mountains with the power of an atomic bomb yesterday morning, its sonic blasts shattering countless windows and injuring about 1,100 people. The event deeply frightened many Russians, with some elderly women, declaring to any news media in sight, that the world was coming to an end or even that the cold war had started again. Many of the injured were cut by flying glass as they flocked to windows, curious about what had produced such a blinding flash of light.

The meteor, estimated to be about 10 tons, entered the Earth’s atmosphere at a hypersonic speed of at least 33,000 mph and shattered into pieces about 18-32 miles above the ground, the Russian Academy of Sciences said in a statement. There was no immediate word on any deaths or anyone struck by space fragments but daredevil and all-round superman, President Vladimir Putin, has said he has everything under control from this incredible event. 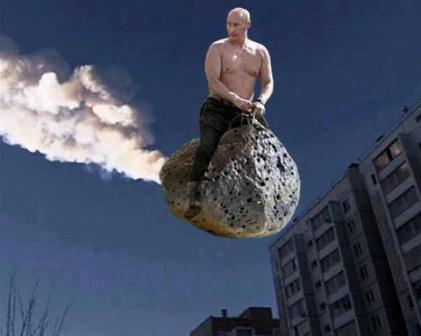 As you can imagine, there’s lots of amateur video that shows the Russian Meteor speeding across the sky about 9:20 a.m. local Russian time, just after sunrise, leaving a thick white contrail and an intense flash. Here are a couple of incredible videos of the Russian Meteor as it came to Earth:

Teach at Pirate’s Cove is blogging about “Nevada Looks To Protect You From The Evils Of Walking And Texting.” Go check it out!

Stacy at The Other McCain has up a great blog post on “Sources Tell Washington Post FBI Can’t Find Menendez’s Dominican Hookers.”

Phineas at Sister Toldjah has up a post on “#Benghazi: the President couldn’t be bothered to pick up the phone.”

Professor Jacobson at Legal Insurrection has up a terrific post on “NASTY WATER carriers.” …Ted Cruz, my new favorite Senator.

Emily at NakedDC has a blog post up on “Things Jesse Jackson Jr. spent campaign funds on, allegedly.” 🙂

Dana at The First Street Journal has up a really good post called “Rule 5 Blogging: In Iraq.” 🙂

Deebow over at Blackfive has up a blog post called “Department of Epic Douchebaggery…”. Go check it out!

This Ain’t Hell has a bunch of great posts up today but I like this one by Jonn called “AJ Dicken: Phony SEAL Part II”.

Michelle Obama’s Mirror has up a post called “Capitalist Pigs Can Afford to Pay a Little Bit Moore.” 🙂

Instapundit has a lot of good blog reading up at his hub including THIS one!

American Power also has up a blog post on “Rising Gun Ownership Among Women is Statement of Independence and Personal Power.” It’s good stuff.