Next post
UN Ambassador: White Supremacy Written Into Our Constitution

Last week President Biden signed an executive order to study the feasibility of adding justices to the Supreme Court. But that’s not fast enough for progressives. They’ve got court packing on their minds. So on Thursday four Democrats unveiled a bill to increase the size of SCOTUS from nine judges to thirteen.

But hold on — they’re not really packing the court. They’re unpacking it, according to Nadler.

Democrats move to add FOUR more Justices to the SCOTUS.

Nadler: "We're not packing the Supreme Court, we're unpacking it".

Adding is subtracting. Up is down and down is up. pic.twitter.com/ZWjJakhFnl

Then again, Jerry Nadler also said that the Antifa violence in Portland was a “myth,” so there you go.

The Intercept first broke the news early Wednesday evening. But then other news outlets quickly snapped it up.

Originally Biden’s 36-member commission was to take up to 180 days — six months — to study adding seats, along with other revisions.

“The Commission’s purpose is to provide an analysis of the principal arguments in the contemporary public debate for and against Supreme Court reform, including an appraisal of the merits and legality of particular reform proposals.”

However, Biden said that while he was open to other reforms, he “was not a fan” of expanding SCOTUS.

But progressives want their court packing and they want it now. Because right-wing extremism or something, said Jones:

“Americans will rightly be skeptical of a commission composed almost entirely of people protected from the real-life consequences of the Supreme Court’s right-wing extremism.”

In other words, they didn’t get to approve the last three SCOTUS justices — Gorsuch, Kavanaugh, and Barrett. After all, not only were they originalists and not progressives, but Donald Trump appointed them. And progressives want nothing more than to obliterate any vestige of Trump ever having been President.

Sen. Chuck Schumer had also received an earful from 20 New York elected officials when he couldn’t derail Amy Coney Barrett’s confirmation. They wrote in a letter:

“Not only do these extremist judges threaten more than a century of progressive achievements, they threaten to foreclose the possibility of any future progress under a Democratic administration.”

They then called on Schumer to do some court packing. The fact that Schumer is up for re-election next year put the screws to him.

NEW: More than 20 New York progressive elected officials are calling on Schumer to commit to expanding the Supreme Court.

Schumer is up for re-election in 2022, this looks like a shot across the bow pic.twitter.com/xRbErUxPry

Progressive groups like Demand Justice aren’t willing to wait for six months, either. So they’re casting their lot with the new bill.

“This bill marks a new era where Democrats finally stop conceding the Supreme Court to Republicans. Progressives understand we cannot afford to wait six months for an academic study to tell us what we already know: the Supreme Court is broken and in need of reform. Our task now is to build a grassroots movement that puts pressure on every Democrat in Congress to support this legislation because it is the only way to restore balance to the Court and protect our democracy.”

Democratic strategist Michael Gordon also said that since Dems are in power, it may be time to pack the court.

“Well now we’re here, and the Democrats have the chance to give America a Supreme Court that represents America.”

So Gordon thinks that a progressive court would represent America? About 74 million of us would beg to differ.

But what did the late Justice Ruth Bader Ginsberg (the Notorious RBG) think about court packing? 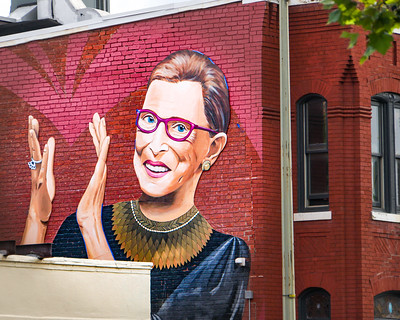 In a July, 2019, interview, Ginsburg told NPR that “nine seems to be a good number,” and that “it’s been that way for a long time.” Besides, it would look partisan, she added.

“It would be that — one side saying, ‘When we’re in power, we’re going to enlarge the number of judges, so we would have more people who would vote the way we want them to.'”

Plus, Justice Stephen Breyer, the court’s senior Democratic appointee, also believes such a move would smack too much of politics. Speaking to a group at Harvard Law School on April 6, Breyer said that SCOTUS relies upon “a trust that the court is guided by legal principle, not politics.” Politics entering the mix would be “further eroding that trust.”

Besides, writes Los Angeles Times writer Michael McGough, the idea that the court is purely partisan is nonsense, anyway. After all, he wrote, Donald Trump’s three appointees didn’t come to his rescue when he contested election results. He added that in lesser known cases, some Democratic-appointed justices have ruled against Democratic presidents, too.

But progressives still burn from Sen. Mitch McConnell thwarting the Senate from voting on Merrick Garland for SCOTUS in 2016. And then there’s the fact that Trump appointed not one, not two, but three justices. That really chaps their hides.

Progressives should be careful of what they wish for. Court packing as an idea has been a negative for them, proved by Democratic losses in Maine, North Carolina, and Iowa in 2020. Strategists suggested that talk of court packing and ending the filibuster had brought Republicans out to vote.

Then there’s the history of President Franklin Delano Roosevelt’s attempt at packing the court in 1937. He tried to add six new justices to the bench after four constitutional justices had blocked some of his New Deal programs. He blamed the court in a March, 1937 Fireside Chat:

“We have reached the point as a Nation where we must take action to save the Constitution from the Court and the Court from itself.”

Besides, he said, adding justices would “make the administration of all Federal justice speedier.”

However, Congress never let FDR’s Judicial Procedures Reform Bill of 1937 out of committee. Both the House and Senate judiciary committees let it die on the vine. FDR’s court packing gambit went down in flames.

Perhaps even Joe Biden remembered what happened to FDR when he said of court packing:

“I’m not prepared to go on and try to pack the court, because we’ll live to rue that day.”

Yes, you just might. Midterms are coming in 2022, and the GOP is hungering for a Congressional red wave.