CNN: Bergdahl Planned to Walk to Nearest Base to Report Wrongdoing

CNN: Bergdahl Planned to Walk to Nearest Base to Report Wrongdoing

While the world has been wondering, speculating, and awaiting any news about why the Germanwings co-pilot crashed his jet into the French Alps, CNN today cited unnamed senior Defense officials who know why Bowe Bergdahl deserted his Afghanistan post in July of 2009.

He wanted to walk to the nearest military outpost to report wrongdoing, as he couldn’t trust his own commanders with appropriately handling order and discipline. In the words of one of the sources, “This was a kid who had leadership concerns on his mind. He wasn’t fed up, he wasn’t planning to desert.”

When I read this in CNN’s report, the BS meter in my head started spinning as fast as an Iranian centrifuge. But I did a little checking.

I discovered that CNN had tried this Bergdahl defense last year by highlighting a video from the liberal British newspaper The Guardian, which caught Bergdahl’s unit just weeks before his desertion. The unit, described by CNN as “an unruly, undisciplined bunch,” had failed to wear their helmets in the field, and their discipline was “lax.” Maybe. However, retired Army Lt. Col. Tony Shaffer, who has investigated the Bergdahl disappearance, said, “There’s nothing going on here that could justify in my mind or justify in anyone that I’ve talked to about this that would allow for or explain Bergdahl simply walking away and abandoning his post.”

Nice try, CNN. But Bergdahl cannot be rehabilitated into the Man of Honor you wish to trot out.

This was a guy who wouldn’t socialize with his fellow soldiers, but instead isolated himself in his bunk to learn Pashto and Arabic via the Rosetta Stone program. He emailed home to his parents the following message:

“The future is too good to waste on lies, and life is way too short to care for the damnation of others, as well as to spend helping fools with their ideas that are wrong. I have seen their ideas and I am ashamed to even be American. The horror of the self-righteous arrogance that they thrive in. It is all revolting.”

And how did the patriotic father of CNN’s hero respond to this message? With the words, in all caps, “OBEY YOUR CONSCIENCE!”

Three days after this receiving this message, Bergdahl deserted.

CNN is obviously trying to cover for the Obama administration’s massive error in trading five Taliban commanders for a deserter. They must protect Obama after his big Rose Garden announcement of Bergdahl’s release when he went Joe Biden on Bowe Bergdahl’s mother, first by holding her hand. . . 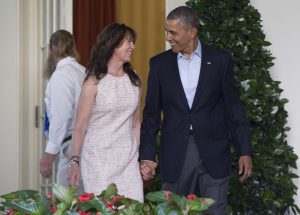 and then by engaging in the famous Biden Back Massage move. 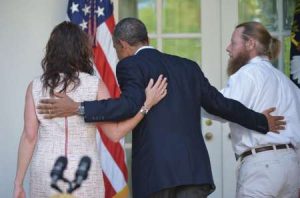 CNN must also cover up for National Security Advisor Susan Rice, who on June 1, 2014, praised Bergdahl on ABC’s This Week as a solder who served “with honor and distinction.” Jason Riley of the Wall Street Journal blasted Rice, saying on Fox News:

“I don’t know how Susan Rice still has a job in this administration. She is either giving the president bad advice or she is deliberately misleading the public, whether it’s on this issue or the Benghazi video. But this deal smelled from the beginning, Chris. As soon as he was released other members of his unit went on record questioning whether or not he was a deserter. These were credible folks who knew what they were talking about. The president decided to play this up. I think it not only makes him look foolish in hindsight, I think it was a mistake strategically. It sent a signal of weakness to the Taliban, to the terrorists. It said we were tired of this fight, we were ready to cut deals. I don’t know if has emboldened other groups like ISIS.”

Thanks for playing, CNN, but we’re not buying what you’re selling. Bowe Bergdahl is clearly a deserter who despised his country, and loathed the oath he took as an American soldier to serve this nation. Six honorable soldiers died in an effort to find this deserter. He’s no Eagle Scout, and clearly deserves to be convicted of desertion.