Previous post
From The VG Bookshelf: Thank You For My Service

First Alyssa Milano tried to take a bite out of Sen. Ted Cruz on gun control, as Lisa wrote on Monday. Now Chicago Mayor Lori Lightfoot wants a piece of the stalwart Second Amendment senator, too.

“Gun control doesn’t work. Look at Chicago. Disarming law-abiding citizens isn’t the answer. Stopping violent criminals — prosecuting & getting them off the street — BEFORE they commit more violent crimes is the most effective way to reduce murder rates. Let’s protect our citizens.”

So what was Cruz responding to? The Labor Day Weekend Shoot-a-palooza in Chicago which left 44 people shot and nine dead.

Ooh, well that pissed off the thin-skinned Lightfoot. So she used her public Twitter account to fire back at Cruz:

“60% of illegal firearms recovered in Chicago come from outside IL — mostly from states dominated by coward Republicans like you who refuse to enact commonsense gun legislation. Keep our name out of your mouth.”

Lightfoot also tweeted this handy-dandy chart to prove her point. Most guns come from neighboring Indiana. 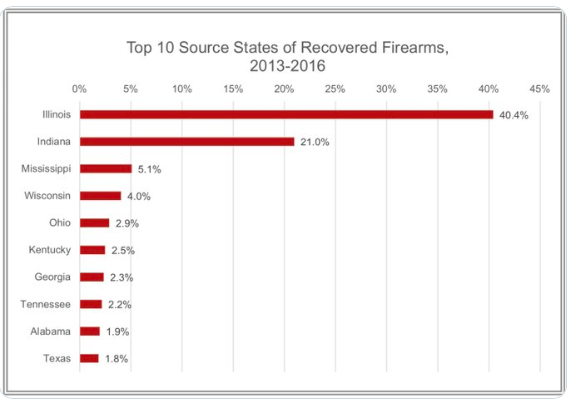 In other words, it’s everybody else’s fault that all those illegal firearms show up in the Windy City. I guess all those states are forcing guns on Chicago gang-bangers.

But why should a neighboring state have to take care of Chicago’s problems, anyway? States should be responsible for their own citizens.

So did Texas Ted back down? Not a chance. He responded — more respectfully, too, I might add:

“Mayor, your anger is misplaced. Virtually every year, Chicago has the most murders of any city in America.”

“Maybe, rather than getting angry when others point out the tragically high murder rate in Chicago, you put aside the partisan talking points & the failed gun-control policies Chicago has pursued for decades. Instead, lock up the violent criminals who are committing murder (and) PREVENT felons & fugitives from illegally buying firearms, and ALLOW law-abiding citizens (who are right now obeying Chicago’s prohibition) to exercise their constitutional right to protect their own lives and their families.”

Later, Mayor Lightfoot was asked about her Twitter tirade during her weekly “accountability” meetings she holds on Tuesday. She launched into a round of yeah-but-Texas-shootings whataboutism. Then she once again blamed “different neighboring states having different systems” who have “coward Republicans” at their helms.

Plus, Houston Police Chief Art Acevedo also had Lightfoot’s back and fired back at Cruz on Twitter. He also blamed all those incoming guns:

“Senator, with all do respect, doing nothing is morally reprehensible, as is spouting NRA soundbites. Firearms in Chicago are coming from across the river and beyond.”

Now that made me giggle. Not only did his misuse of “do” for “due” make me smile, I don’t know what river he’s talking about. That’s because there is no river between Illinois and Indiana close to Chicago. And I know this because I was born and raised in Northwest Indiana, part of “Chicagoland.”

Moreover, some of the most dangerous ‘hoods in Chicago are on the south side, where it’s a short drive over the state line to East Chicago, Gary, or Hammond, IN. And what do those cities have in common with Chicago? Bingo — they have high crime rates too. And guess what else they have in common?

Yep, you guessed it. They’re all Democrat–run towns. Not Republican, as Lightfoot fumed.

Now let’s see what Mayor Lori Lightfoot wants to sweep under the rug.

Let’s look at the lax sentencing in Chicago, shall we? For example, Joaquin Urcino, a six-time felon, recently appeared in court on gun charges. At first Urcino was held without bail, then Cook County Judge Carol Howard reduced bail to $100K. But she must’ve liked his face or something, because she then told him he didn’t have to pay it, and she set him free on electronic monitoring.

But wait! There’s more! There’s Antwane Lashley, an 18-year-old who last week was charged with murder and attempted murder. And guess what? He was out on electronic monitoring, too, even after prosecutors charged him with possession of an illegal weapon in the spring. Even worse, he’s not the only perp who got cheap or no bail; in fact, that seems to be the modus operandi in Chicago.

Ah, but Cook County Board President Toni Preckwinkle said the city needs to “keep these matters in context” and not “sensationalize” them. She also defends easy bail because gee, those ‘hoods are dangerous and people need guns for protection. Even criminals, apparently.

And then there’s Cook County State’s Attorney Kim Foxx, she of the Jussie Smollett wrist slap. Not only is she notorious for “recusing” herself from the Smollett fake crime charge, but she also lets criminals walk free, too, even murderers. Former Circuit Judge Pat O’Brien — a Republican who is running to oust Foxx — said that she:

“. . .displayed an indifference to the statutes of the state of Illinois, she’s failed to prosecute statutes involving felony theft … and even going so far as to not prosecute persons who are accountable for murders.”

But what’s to worry about Kim Foxx? After all, she just announced a partnership with “Code for America,” which aims to expunge marijuana convictions from criminal records.

Mayor Lori Lightfoot should stop playing politics and blaming Republicans for Chicago’s woes. Throwing crap at others without picking up the crap in your own yard solves nothing.