Meriam Ibrahim has been re-arrested trying to flee the country with her family at the Khartoum airport, one day after being freed from prison:

Meriam and her husband and two children were ALL arrested (even the children!) and taken away by 40 security agents of the notorious National Intelligence and Security Services (NISS).

Mohammed, who was at the airport with Ibrahim, said the security forces did not give him a reason for her re-arrest, and made no reference to her dropped case even when he identified himself as her lawyer. He said Ibrahim had been taken to a detention center accompanied by her two children and husband Daniel Wani, who insisted on going with her. “I have no more information,” he said. “They knew she had been cleared by the court but they have re-arrested her – I don’t know why.”

I’ll take a guess why.  Emboldened fanatical Muslim “security forces” that have little to no fear they will be stopped.

This is the result of smart diplomacy.  Obama and his “working on it” Secretary of State, John Kerry are more interested in bringing in transgender, bisexual, and lesbian ambassadors to the State Department. 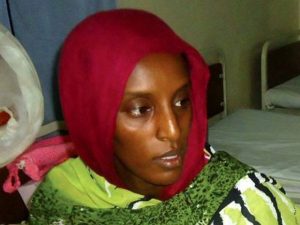 Pray for Meriam and her family.  Because it does not look good.  The NISS does not operate through the courts if it claims to be working on a matter of national security and can detain people indefinitely.  They also take prisoners to “ghost houses” which are notorious for torture.