by Cassy Fiano in media 3 Comments 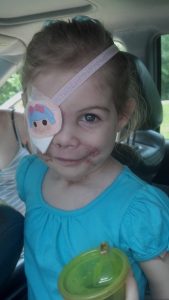 Does this face look scary to you?

Last week at KFC in Jackson MS this precious face was asked to leave because her face scared the other diners. I personally will never step foot in another KFC again and will be personally writing the CEO.

Here is Victoria’s story: while visiting her grandfather in April, she was attacked by three dogs. She suffered a broken upper and lower jaw, a broken nose, cheek bones and right eye socket, as well as losing her right eye completely and the ability to move the right side of her face. She is currently on a feeding tube. People were understandably outraged when they learned about her story and the indignity she had been made to suffer at KFC’s hands. KFC immediately promised an investigation and $30,000 to Victoria. Donations flew in. A Las Vegas plastic surgeon even came to see Victoria and offered free reconstructive surgeries.

The only problem? The KFC story, it turns out, is not true.

That’s right: the heart-wrenching story of a girl being asked to leave KFC because her scars were “scaring customers” is a hoax.

Kelly Mullins, the child’s grandmother who was reportedly with her at the store, told KFC that the incident happened on May 15.

A Facebook post attributed to Victoria’s Victories, a support site for young Victoria Wilcher who was mauled by three of her grandfather’s pit bulls, has the two in Jackson on May 15 having gone to Blair E. Batson Children’s Hospital. There are two KFC locations close to the hospital — on Woodrow Wilson Drive and Meadowbrook Drive.

The source said surveillance videos show that at no time on the 15th were any people children in the store who match the description of Victoria Wilcher or Mullins. The tapes were viewed in both the Meadowbrook and Woodrow Wilson KFC locations in Jackson, the source said. In hours of tape, the source said one small boy with his parents is seen, but they order food and leave the store.

The source said no orders were recorded to include mashed potatoes and sweet tea on the same transaction, or even the two items as part of a larger order on May 15.

Yet strangely, the family can’t seem to keep their story straight.

The family initially told KFC the incident happened at the location on State and High streets, a claim backed by a Facebook post by Victoria’s Victories, a page run by Teri Rials Bates, the girl’s aunt that read: “Thank you for your support for Victoria. If you would like to file a complaint its the KFC on State Street in Jackson MS.” That store is not in operation and has been closed for several years.

Victoria’s Victories changed its story Friday, saying the State Street reference was a mistake. In it, Bates wrote: “Im the Aunt, I run her page and Im the one that miss quoted that it was State street when it was actually Woodrow Wilson. Dont blame the grandmother for my mistake!”

And what was the result of the family’s story?

After it went viral, employees and managers at both Jackson locations have faced death threats, have had drinks thrown at them through the drive-thru window and have faced constant verbal harassment, the source confirmed.

One employee told the Leader-Call on June 20 that it was the first day since the firestorm erupted that he would wear his KFC work shirt in public.

… The incident garnered near instant national and international attention and became an economic windfall for a family who was openly concerned via social media of their fight with an unidentified insurance company and their financial struggles with paying for Victoria’s medical bills.

This is where it gets interesting. The family had posted earlier, prior to the KFC story, of the financial difficulties they were facing.

This was the response afterwards: 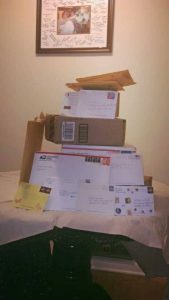 Turns out a sob story about a poor, disfigured little girl being treated appallingly sure does make the donations roll in. Before the KFC story, Victoria’s GoFundMe account had raised just short of $600 from seven donors. It’s now risen to over $135,000, plus free gifts and offers to perform free surgeries. Hoaxes are lucrative stuff.

Now, let’s just take a minute here and ponder how unbelievably despicable this is. Here is a child, a little girl, who has already been through hell. She has suffered more than any child should ever have to suffer. And her relatives, the people who should care for her the most, turned around and exploited that suffering in order to make money. Now it has been revealed that the incident is a hoax, and little Victoria’s name will forever be associated with this scandal. Is it possible for someone to sink lower? Can it get any worse than that? The pretend racial slurs or allegations of “fag” written on the tip line of a restaurant receipt are bad enough, but this story takes it to an entirely new level of disgusting, because there was a child at the center of this. Inevitably, there is always talk of how they “didn’t want to hurt anyone”, but these fake victim stories do hurt people. In this case, the specific KFC location was named, and employees there had to face harassment and abuse because of this family’s lie. They should be ashamed of themselves — and they should be arrested. What they did is theft. Obtaining money through fraudulent means is stealing, and considering how especially abhorrent this situation is, there needs to be a punishment. Considering that a little girl’s pain was exploited to make a quick buck, these people are more deserving than most of being held accountable. It’s makes a sad situation for Victoria even worse, because none of this is her fault. She had nothing to do with it, but it’s her name that will be attached to this story forever.

Time after time we see this happen, and there isn’t much that would dissuade someone from making up a story to get themselves some money in the future. Even if they get found out, what’s the downside? Some bad attention in the press for a week or so until everyone forgets about it? That’s not such a big deal when you’ve got over $130,000 in the bank to comfort you. We need to make an example of these people, to send a message that playing the victim to defraud people out of their money is a crime, and that if you are found to be a liar, there will be repercussions. 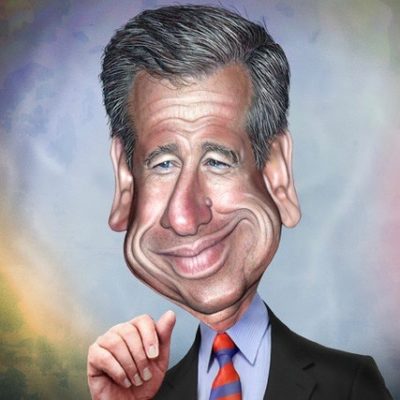