Are You Not Entertained? Animals Were Harmed During the Making of Films

Are You Not Entertained? Animals Were Harmed During the Making of Films

Most of us with any iota of awareness know by now that many in the media often march like good little soldiers on the orders of The One. Now, more than ever in his five, protracted, Carter-like years of imperial reign, Mr. Combustible Pants needs effective distractions from the fraud that is DemocratCare, one among a litany of scandals hanging like a rotting, stinking carcass around the necks of the Democrats in D.C. Cue the diversion squirrels. Look over here:

We’ve all seen it. The disclaimer attached to the ending credits of just about any film coming out of the Socialism-pushing entertainment industry that utilizes animals. You know, the American Humane Association’s feel-good disclaimer assuring viewers that “No animals were harmed” during the making of this film. Well, as it turns out, under the AHA’s watch scores of animals were indeed harmed—some even maimed and killed—during the production of some of the biggest blockbusters coming out of Hollywood. An in-depth report conducted by the Hollywood Reporter reveals disturbing cover-ups of what appears a rampant culture of animal abuse within the entertainment industry. So much for mawkish assurances.

On the set of the multiple Academy Award-winning film Life of Pi, the Bengal tiger whose character is named “Richard Parker” nearly drowned during the filming of one of the movie’s scenes. AHA monitor Gina Johnson had this to say in a CYA email following the incident:

“I think this goes without saying but DON’T MENTION IT TO ANYONE, ESPECIALLY THE OFFICE! I have downplayed the f— out of it.”

Further, on the set of the The Hobbit: An Unexpected Journey, no less that twenty-seven animals died from exhaustion, dehydration, or drowning. Both films received a carefully-worded, highly-coveted AHA disclaimer, leading viewers to believe the safety and health of the films’ animals were actively protected.

And in further disturbing findings, a husky dog was punched repeatedly in its diaphragm by an animal trainer in the production of the film Eight Below, and a chipmunk was fatally crushed when it was dropped and stepped on in the Matthew McConaughey-Sarah Jessica Parker comedy Failure to Launch. While Ms. Parker professes grave concern for race horses, apparently chipmunks are fair game. 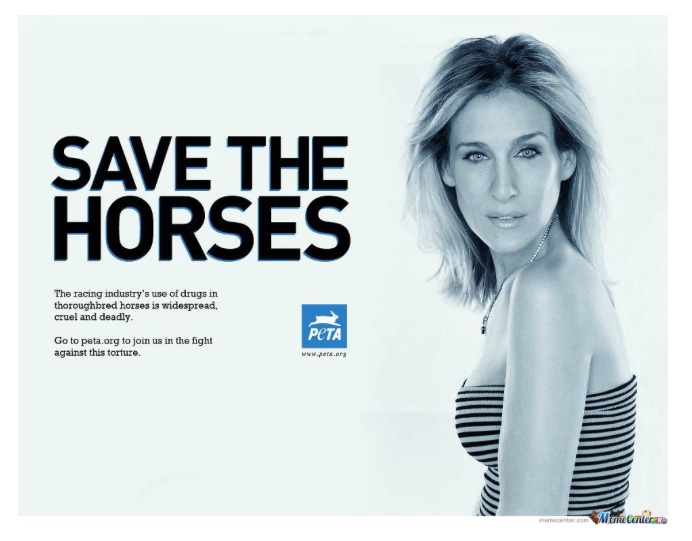 And, as revealed by the Hollywood Reporter, it seems AHA reps often make little more than a cameo appearance on the sets of many productions.

“Meanwhile, only about 50 percent of animal action is monitored domestically, according to Film & TV Unit senior adviser Karen Rosa. The gap is due to a variety of factors, from nonunion productions that opt out to late notifications, distant locations, fluctuating shooting schedules and inexperienced crewmembers who either don’t know or — in certain cases — don’t want to ask for monitoring in the first place. In addition, because of the increase in movie and television production in recent years, the AHA sometimes doesn’t have enough safety representatives to handle requested coverage, resulting in brief visits by monitors, or even none at all.

“Reps get sent to multiple sets in a day, which means we can check off a set as ‘covered’ even though we only stayed there for five minutes,” says one staffer, who notes that limited personnel resources are allocated toward the riskiest scenes. “I feel that, more and more, this is done not to make sure we at least see the trainers and animals and make sure that it’s not a horrible situation, but rather to keep the numbers up and make it look like we are monitoring more than we actually are.”

Animal abuse reports in the entertainment industry are not anomalous, or new; they’ve been whispered throughout the industry since its inception. Despite the formation of the AHA, it appears there persists an unspeakable culture of widespread animal cruelty being systematically covered up in exchange for box office receipts. So where is PETA—the reportedly more rabid of the animal protectionists in this country—on this issue? To their credit they have indeed penned articles criticizing the entertainment industry for abusing animals it hires for its productions. But given their affinity for fiercely promoting their agenda of the defense of animals, why are they not running full-page, in-your-face glossy ads like these, specifically calling out the complicit AHA and the entertainment industry on its “do as I say, not as I do” hypocrisy while it demands we abandon our leather belts and graze on nothing but wheatgrass and tofu? Why is it not fervently demanding the safety of defenseless animals on Hollywood sets? Oh that’s right, because apparently they’re too busy spending their marketing dollars objectifying both genders, and hiring hypocritical celebrities to help rid the nation of evil carnivores and leather jackets, while some of these same actors simultaneously turn a blind eye to their own industry’s mistreatment of animals. Hypocrisy knows no limits. And, I suspect, neither do greasy palms.

To quote Russell Crowe’s Maximus Decimus in Gladiator: “Are you not entertained?”