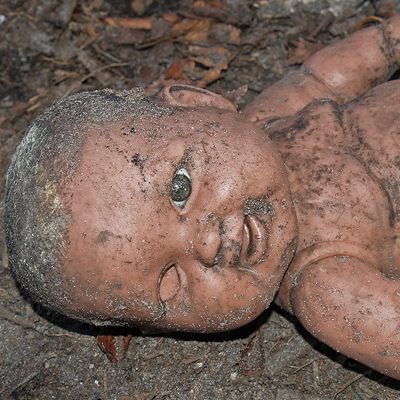 On Saturday afternoon, abortion activists descended upon the home of Supreme Court Justice Amy Coney Barrett, demanding unlimited abortion. Only this time they pushed the envelope even further by using fake blood and baby dolls. And remember this: Amy Coney Barrett has children living at home.

It’s not the first time that these harpies have targeted ACB, or even her children. Earlier this month the radical abortion group “Ruth Sent Us” posted information about her church, and the Catholic school which her children attend.

If you’re in the DC metro area, join us. Our protests at Barrett’s home moved the needle to this coverage.

“From here forward, any anti-choice group who closes their doors, and stops operating will no longer be a target. But until you do, it’s open season, and we know where your operations are.”

They also reached out to fellow travelers “with the urge to paint, to burn, to cut, to jam” — and not in a good way, either.

Are these women trying to outdo each other in being outrageous? There’s a contending group called  “Rise Up 4 Abortion Rights,” which protested outside the home of Amy Coney Barrett on Saturday. Only these junior shrews painted themselves in blood and used baby dolls as props. Yes, baby dolls.

“We aren’t incubators! Youth procession delivered baby dolls to Amy Coney Barrett. We aren’t protesting to change the minds of women-hating fascists. We’re calling on the pro-choice majority, on YOU, to get in the streets to STOP #SCOTUS from overturning Roe”

They wailed about “forced births” — those that didn’t tape their mouths shut, that is. They wore white pants with fake blood staining the crotch and inner leg areas, and carried baby dolls. The dolls symbolized the babies they supposedly wouldn’t be able to snuff out if the Supreme Court overturns Roe v. Wade.

Using dolls as props shows that activists know the unborn aren’t just nondescript “fetuses.” They know that abortion kills babies, and yet they clamor for unlimited rights to dispatch them.

Here’s a video of this group in action outside Coney Barrett’s home in Falls Church, VA. Classy bunch, aren’t they?

Notice how they held the dolls away from their bodies, as if babies are loathsome trash to be discarded. Which, truth be told, is exactly how they view unborn human life.

Radical abortion activists are much like the worshippers of the ancient Canaanite deity Moloch. According to ancient Greek and Judaic translations, the figure of Moloch was a large bronze statue of a man with the head of a bull. A fire was kept within the image, and priests would place children inside as sacrifices.

” … they heated him from his lower parts; and his hands being stretched out, and made hot, they put the child between his hands, and it was burnt; when it vehemently cried out; but the priests beat a drum, that the father might not hear the voice of his son, and his heart might not be moved.”

Of course we don’t know what Moloch idols really looked like, or how such child sacrifices took place. But archaeologists have found evidence of such events in the region of Canaan. We also know that child sacrifice occurred in ancient Carthage as well.

Ancient Hebrews and Roman senators alike were appalled at the practice, as we are today. That is, those of us with reverence for life.

But abortion activists lack this reverence, as well as a moral center. They may not worship the literal god Moloch (if they worship any god at all), but instead they exalt themselves. I’ll do what I want is their dogma, and abortion is their wicked sacrament.