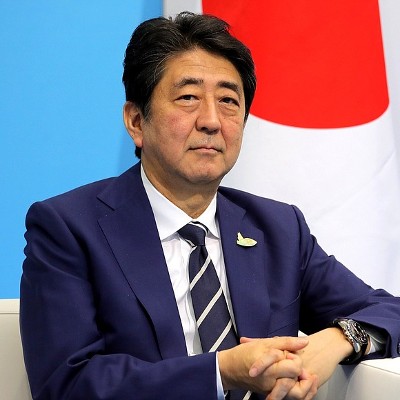 The assassination of former Prime Minister Shinzo Abe is deeply horrific and shocking.

It’s especially unexpected because Abe was the former prime minister of Japan. His death doesn’t change anything within Japanese politics – which means as we learn more about the motives of the assassin, it will likely end up being more personal than political. Abe had resigned his position as prime minister back in 2020 due to his health, which makes the assassination all the more confusing.

Abe is Japan’s longest-serving prime minister. He served from 2006 to 2007 and again in 2012 until he resigned in 2020 after his ulcerative colitis, a chronic condition, resurfaced, calling his decision at the time “gut-wrenching.”

During his term, he focused on the economy, rebuilding Japan’s military and being a larger player in international affairs.”

But even as we wait for an explanation of motive (which we may never know or fully understand), we can rest assured that Joe Biden has it all figured out. You see, Abe’s assassination is really all about… gun violence.

That’s what he said.

I am stunned, outraged, and deeply saddened by the news that my friend Abe Shinzo, former Prime Minister of Japan, was shot and killed while campaigning. This is a tragedy for Japan and for all who knew him. I had the privilege to work closely with Prime Minister Abe. As Vice President, I visited him in Tokyo and welcomed him to Washington. He was a champion of the Alliance between our nations and the friendship between our people. The longest serving Japanese Prime Minister, his vision of a free and open Indo-Pacific will endure. Above all, he cared deeply about the Japanese people and dedicated his life to their service. Even at the moment he was attacked, he was engaged in the work of democracy. While there are many details that we do not yet know, we know that violent attacks are never acceptable and that gun violence always leaves a deep scar on the communities that are affected by it. The United States stands with Japan in this moment of grief. I send my deepest condolences to his family.”

Okay, who wants to tell him? The “gun” that was used to kill Shinzo Abe was a homemade one. Japan has extremely stringent gun control – the type that Democrats dream about.

Under Japan’s firearms laws, the only guns permitted for sale are shotguns and air rifles — handguns are outlawed. But getting them is a long and complicated process that requires effort — and lots of patience.”

To qualify for a firearm license, potential buyers must attend an all-day class, pass a written test and a shooting-range test with an accuracy of at least 95%. They also must undergo a mental health evaluation and drug tests, as well as a rigorous background check — including a review of their criminal record, personal debt, involvement in organized crime and relationships with family and friends.”

After obtaining a gun, the owner must register their weapon with police and provide details of where their gun and ammunition is stored, in separate, locked compartments. The gun must be inspected by the police once a year, and gun owners must retake the class and sit an exam every three years to renew their license.”

The restrictions have kept the number of private gun owners in Japan extremely low.”

Even calling a homemade firearm built from pipes and duct tape "a gun" is stretching the definition, ESPECIALLY when you're alluding to a debate about legal firearm ownership. That thing was essentially a highly directional bomb.

But the media has their own narrative to push. You see, Shinzo Abe was a center-right politician in Japan who got along well with Donald Trump. AHA! CUE THE NARRATIVE! CBS Mornings has it all figured out – Abe was a “right wing nationalist and conservative,” according to their correspondent Elizabeth Palmer.

Abe just died, and this is how the American media, actual foriegners in Japan, are going to frame his assassination. And NPR decided to join in the chorus – except they deleted their first tweet. The second tweet was not an improvement.

Yup, going from “divisive arch-conservative” to “ultranationalist” was SO much better. Just how pervasive is the media narrative? THIS pervasive.

Why does AP need the adolescent labels of a 2011 Tumblr blog?#doNews pic.twitter.com/JiVWssesOT

And once the AP does it, everyone does it. It’s like watching a domino effect.

One writer injecting a label has the power to improperly influence millions. Centralized power in a flash. pic.twitter.com/6keT4Kmy2P

If you’re keeping score at home, former Japanese Prime Minister Shinzo Abe was a “divisive and powerful arch-conservative,” but terrorist Abu Bakr al-Baghdadi was “an austere religious scholar.” And there, in a nutshell, is why trust in the media remains in the basement. Good freaking grief.

The assassination of Shinzo Abe is a truly terrible moment for Japan, and a tragedy for his family. However, Joe Biden and the American media seem determined to make it even worse by co-opting his murder into their preferred narratives. And THAT is truly sickening and crass.